Luckily got a 10day break from work ( in between jobs ) and I decided to make a solo trip to Unesco Sites in and around Delhi with Valley of Flowers as a crucial one before it shuts for the year.Posted my travel plan on the group mail and Sriram joined me for some of the places.

Started from Secunderabad – Rajdhani Express to Delhi – 7.50 AM

Preceded by RTFF previous night all that we could do in the train is eat and sleep.( Rajdhani & Shatabdi Trains stuff you with food!!!).Din’t realise how soon a day passed off in a train!!!

We were supposed to take 6.30 AM train to Haridwar – We realized late that we need to go to other Delhi station to catch the train to Haridwar,with no option left we had to wait for next train at 11.30 am which starts from H.Nzm station.

Having good 5 hours time,we decided to visit Humayun’s Tomb which was in close proximity.

This tomb, built in 1570, is of particular cultural significance as it was the first garden-tomb on the Indian subcontinent. It inspired several major architectural innovations, culminating in the construction of the Taj Mahal.

At the entrance don’t miss having a glance at the gallery having images and models of how this tomb was constructed.

Those interested in History & Architecture,look at the picture which indicates the development of Tombs in Delhi from 1271 AD to 1572 AD. 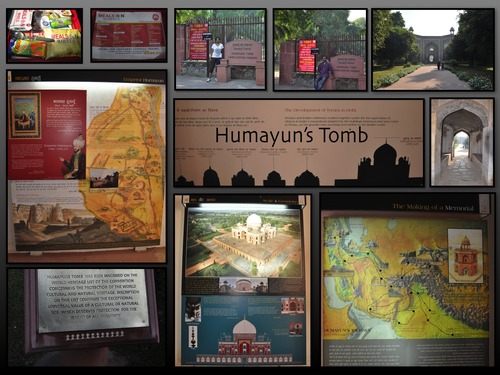 Humayun’s tomb is believed to have been designed by his widow. Its plan, based on the description of Islamic paradise gardens, is known to have inspired the Taj Mahal and many later Mughal tombs. This type of garden is known as a charbagh and is based on a grid.

The structure is built with red sandstone along with white and black marble. Infact the Humayun’s Tomb is the first Indian building to use the Persian concept of a double dome (made up of white marble) with its marble borders. With high arches and double domes, the tomb is a classic example of the Mughal architecture with Persian influence. 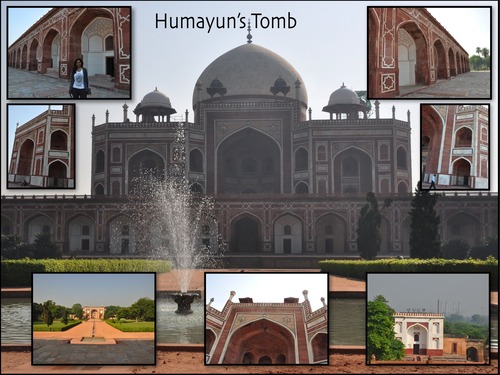 The tomb is octagonal in shape and can be entered through a long processional track. There are two double-storeyed gateways to enter the tomb, one on the west and the other on the south. The southern gateway remains closed. The baradari or the pavilion occupies the center of the eastern wall and the hamam or the bath chamber the center of northern wall. The tomb consists of arched lobbies. The high walls surround a square garden which is divided into four large squares. The pathways form a Mughal garden known as ‘charbagh’ which is decorated with fountains. The combination of red sandstone with black and yellow stone was used to give variation. The roof is surmounted by a high marble double dome and has pillared kiosks (chhatris) placed around it.

There are a number of eminent Mughal personalities who are buried in the mausoleum. There are graves of Hamida Begum, Akbar’s mother; Dara Shikoh, Shah Jahan’s son and Bahadur Shah II, the last Mughal Emperor. 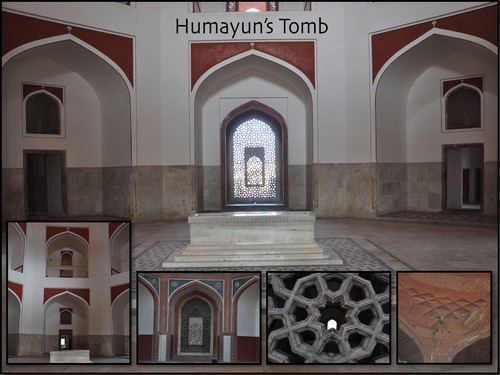 This is the one of the few monuments,where conservation was done at its best in regards to proportion,colours and material which truly matches to how it was originally.

1.This place doesn’t have a cloak room.We somehow convinced the Security guard at the entry to takecare of our lugguage until we were back,better to carry less.

2.It takes maximum 2 hours to go around this place.

https://www.gounesco.com/heritage/proof/36529306246-humayuns-tomb/https://s3-ap-southeast-1.amazonaws.com/gounesco.com/wp-content/uploads/2012/11/25135900/tumblr_me25xhUuu51rpbqwe.jpghttps://s3-ap-southeast-1.amazonaws.com/gounesco.com/wp-content/uploads/2012/11/25135900/tumblr_me25xhUuu51rpbqwe-150x150.jpg2012-11-25T19:29:00+05:30Jai Bharathi AddepalliUncategorizedBharathi,Delhi,gounesco,humayun,india,Jai Bharathi,tomb,travel
Luckily got a 10day break from work ( in between jobs ) and I decided to make a solo trip to Unesco Sites in and around Delhi with Valley of Flowers as a crucial one before it shuts for the year.Posted my travel plan on the group mail and...
Jai Bharathi Addepallijaibharathi@gmail.comProof_userGoUNESCO | Go UNESCO
Categories: Uncategorized. Tags: Bharathi, Delhi, gounesco, humayun, india, Jai Bharathi, tomb, and travel.