Proof by
Raghavan Rengachari
Proof for
WHS - Group of Monuments at Hampi
Travel Date
May, 12 2012

So, after completing my first destination – Mahabalipuram, I was back for 2 others – Hampi & Pattadakkal. And one of my friends Maheshwari was too eager to join the trip as well as the GoUnesco challenge! After a lot of primary & secondary research, I arrived at the plan of Bangalore-(Badami-Pattadakkal-Aihole)-Hampi-Bangalore, but on reaching Majestic Bus Terminus by 10, was told that the last bus to Badami was at 8! So, got into the bus to Hospete, the nearest to Hampi.

The bus started by 10:30 that night & we landed at Hampi by 5:30 the next morning, but the buses to Hampi would start only by 6:45. Being a coffee addict I headed for a coffee, while I discovered that Maheshwari was the same with Tea. And we got a share-auto & reached Hampi by 6:45. Starting at 7 AM, the first place to cover was the Virupaksha Temple. The temple was quite serene and welcoming. 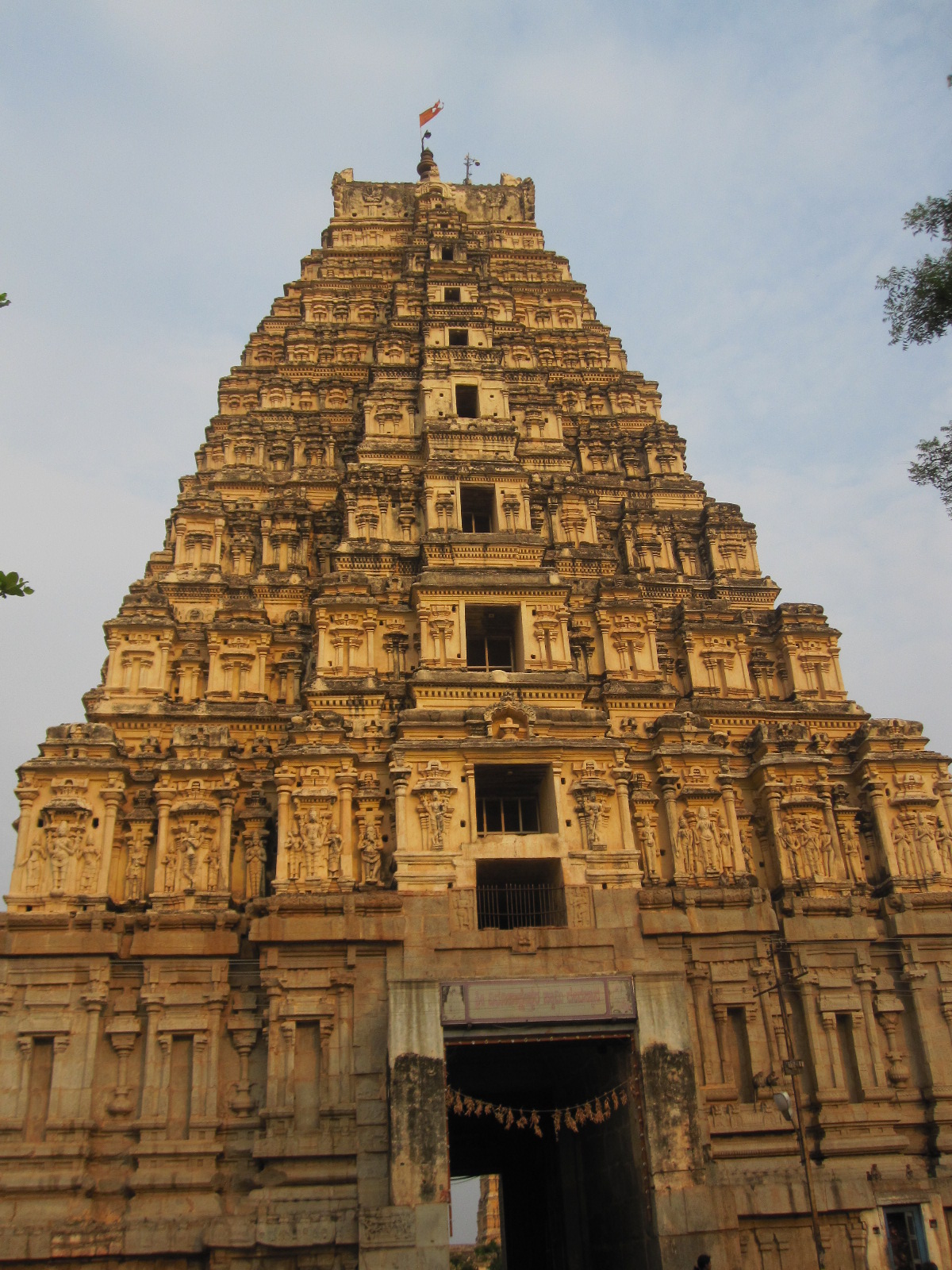 Right behind the main shrine, there’s a corner where there’s a pinhole camera made in the wall of a temple, through which sunlight passes through and makes an inverted image of this gopuram fall on another wall! Totally amazed!

Surrounded by the Thungabhadra river & huge boulders of rocks, Hampi is said to be chosen as an ideal capital city. Right next to the temple, there’s Thungabhadra flowing, and one can enjoy the water scream all the way. Btw, Hampi is full of rocks and sculptures; so you might encounter a lot of things like this. 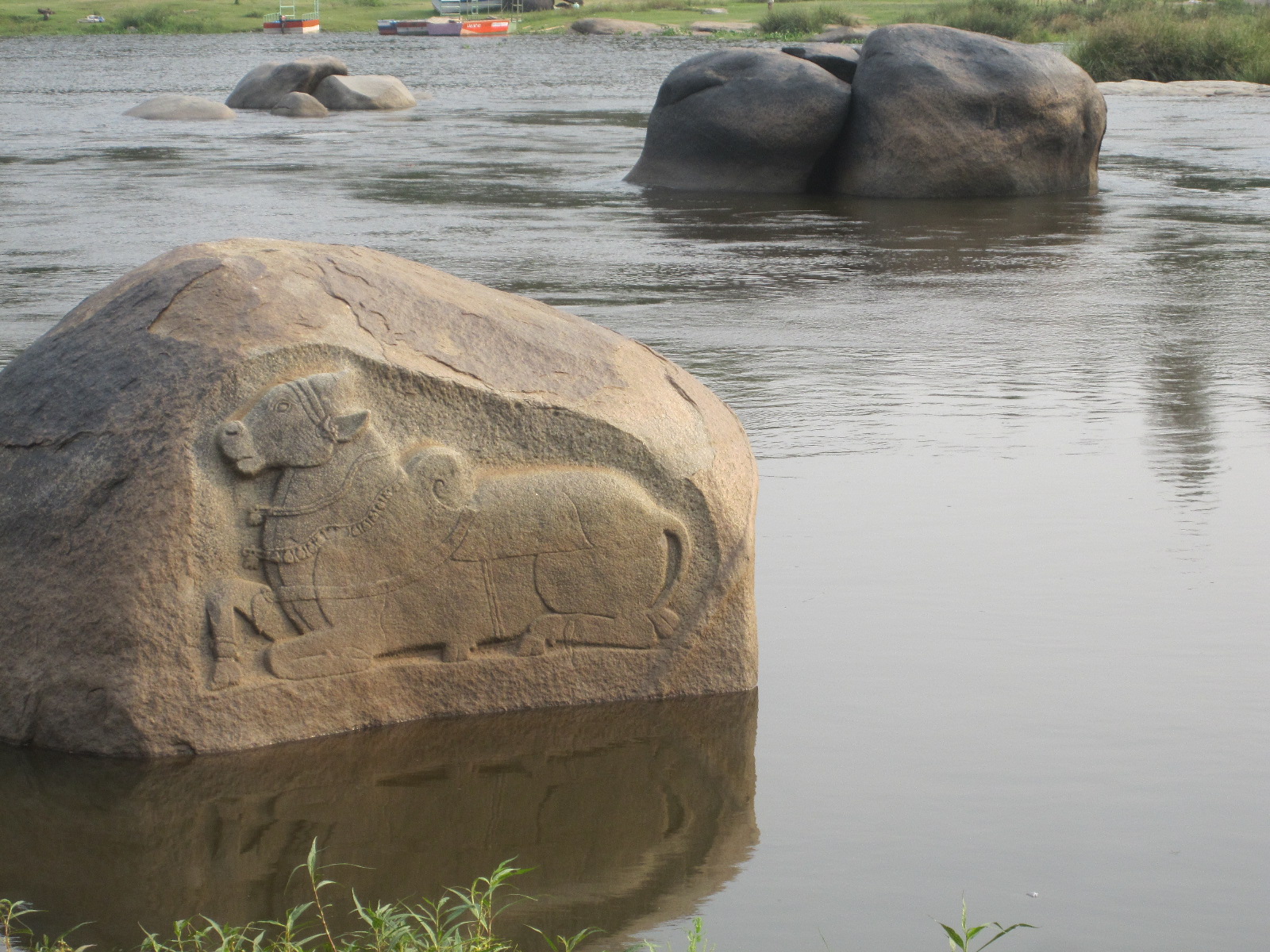 Hampi is not just a city. It’s more like a civilization that has been sleeping in there for half a millennium! We covered the sites as much as possible in a day, but if you’re planning the same, I’d advise you not to. The whole city painted haunting picture, and every site would make you think of it’s state back during the kings’ times. I was too overwhelmed by this and I still am. 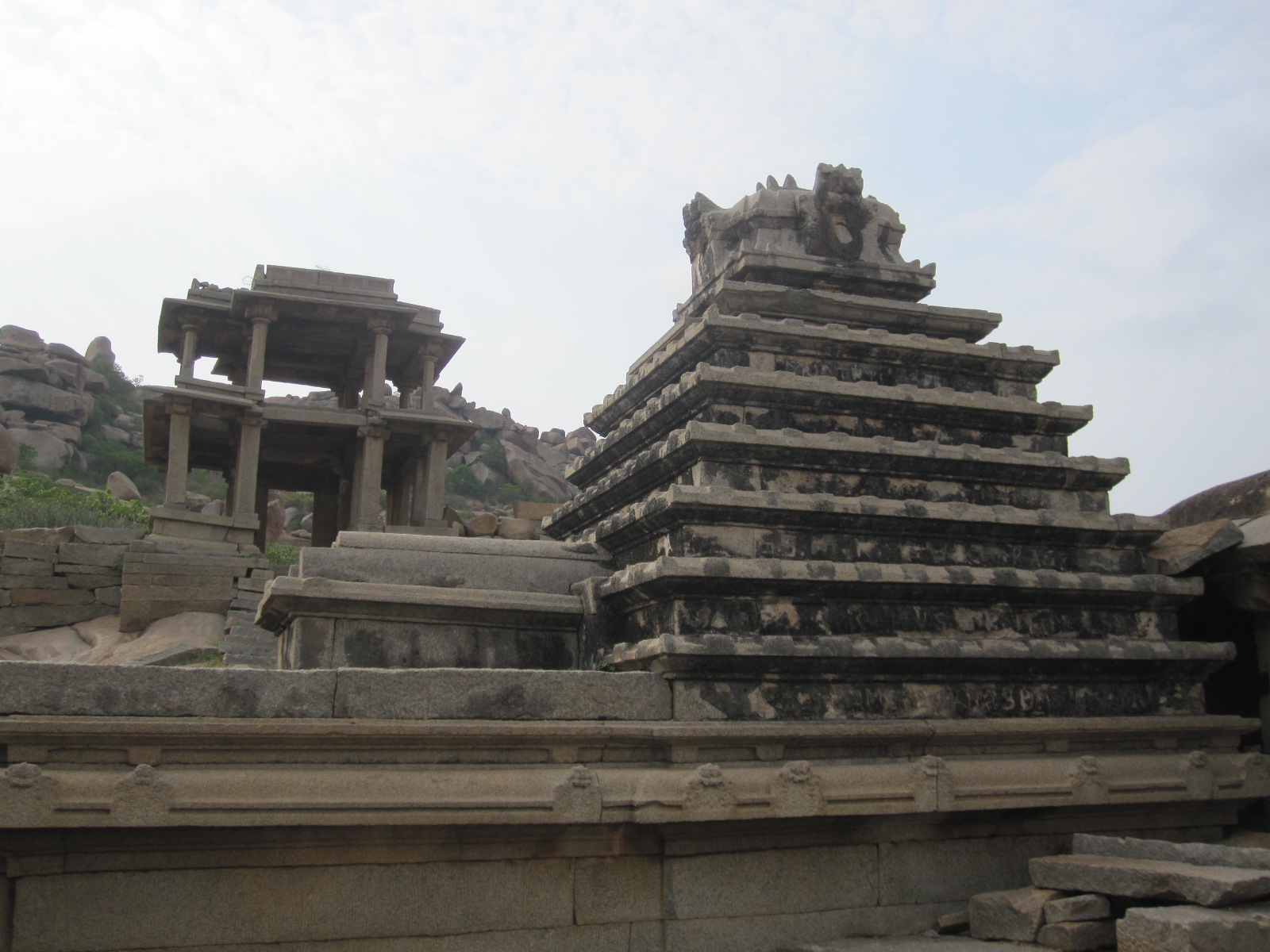 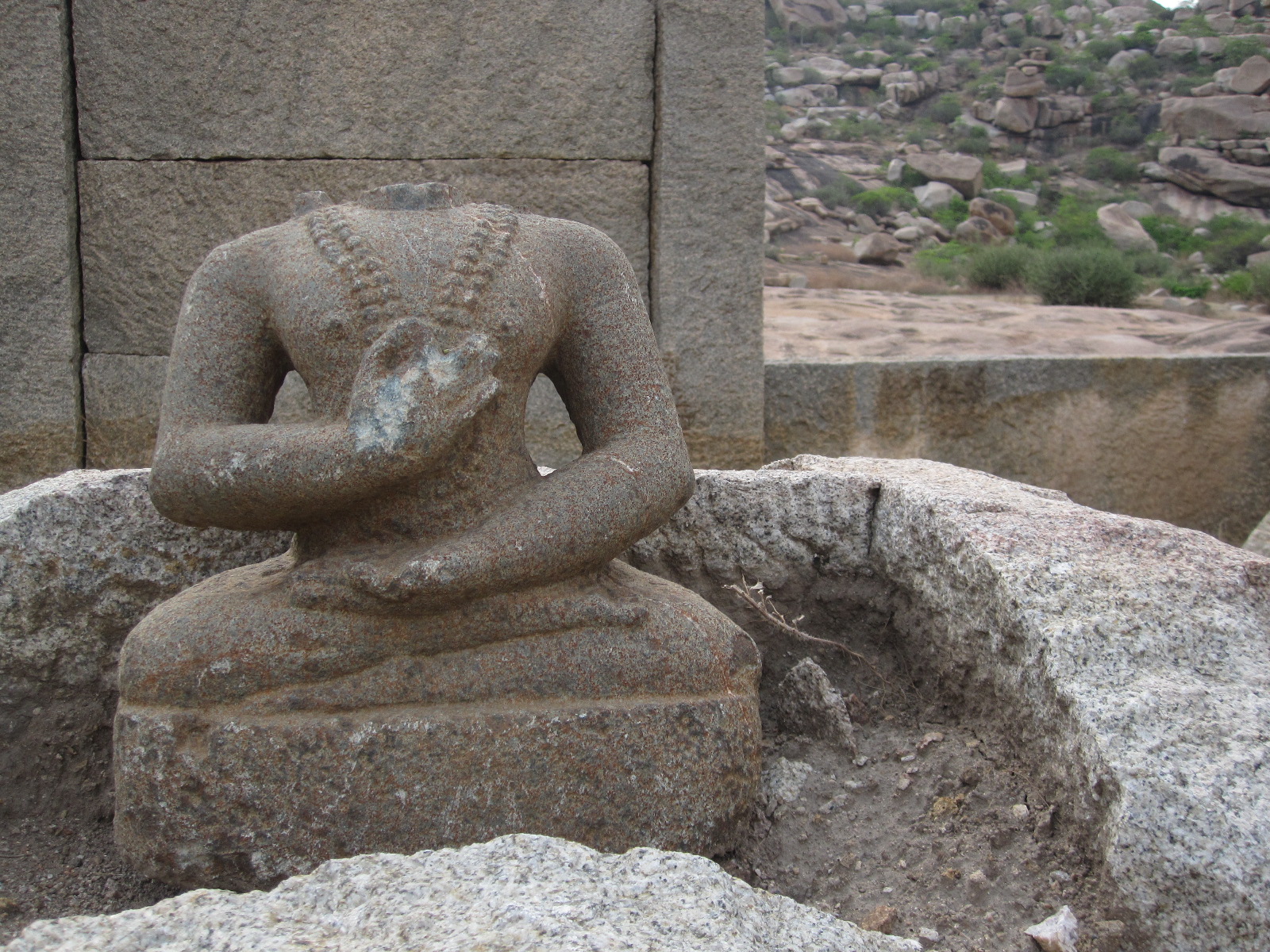 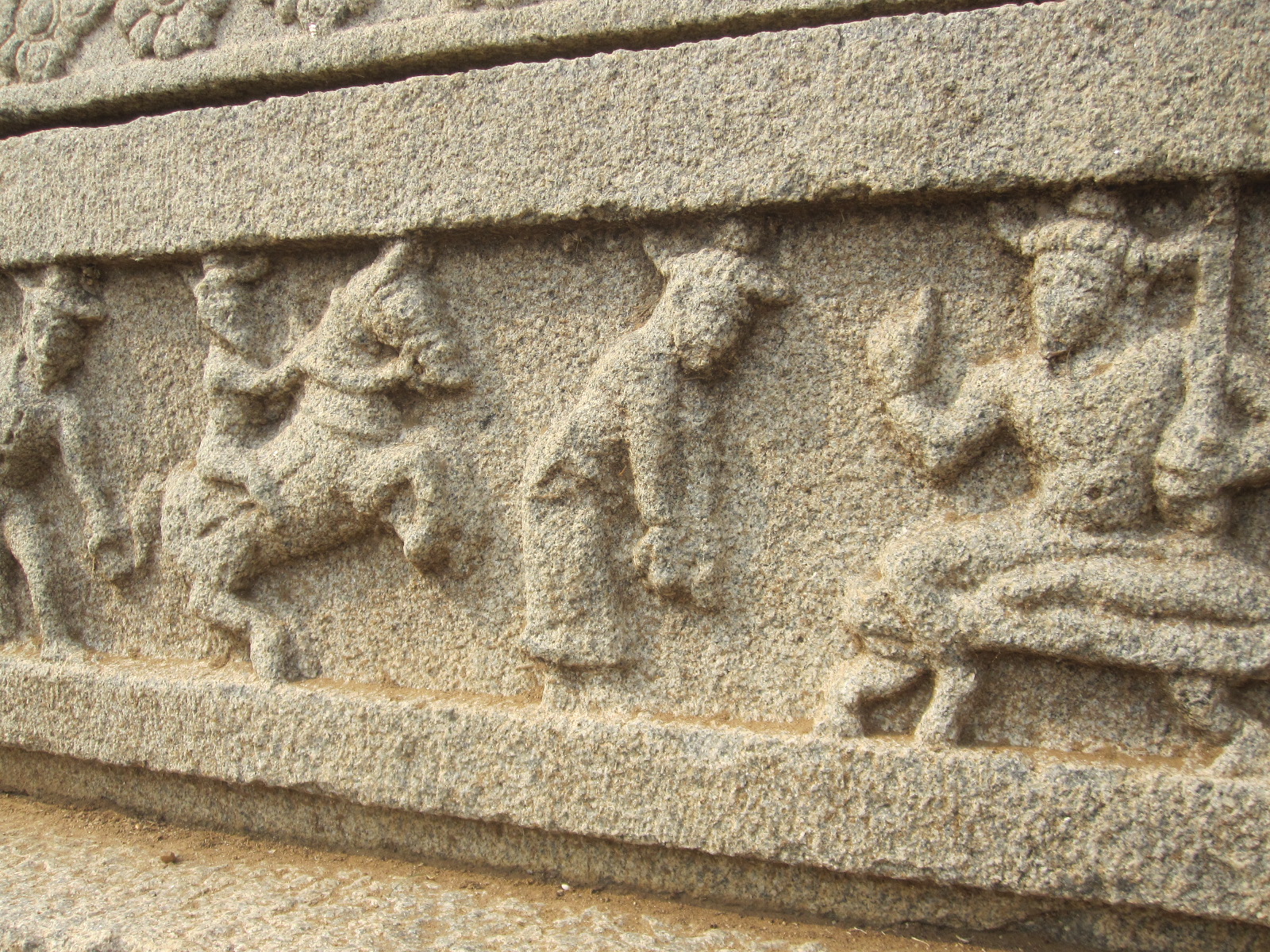 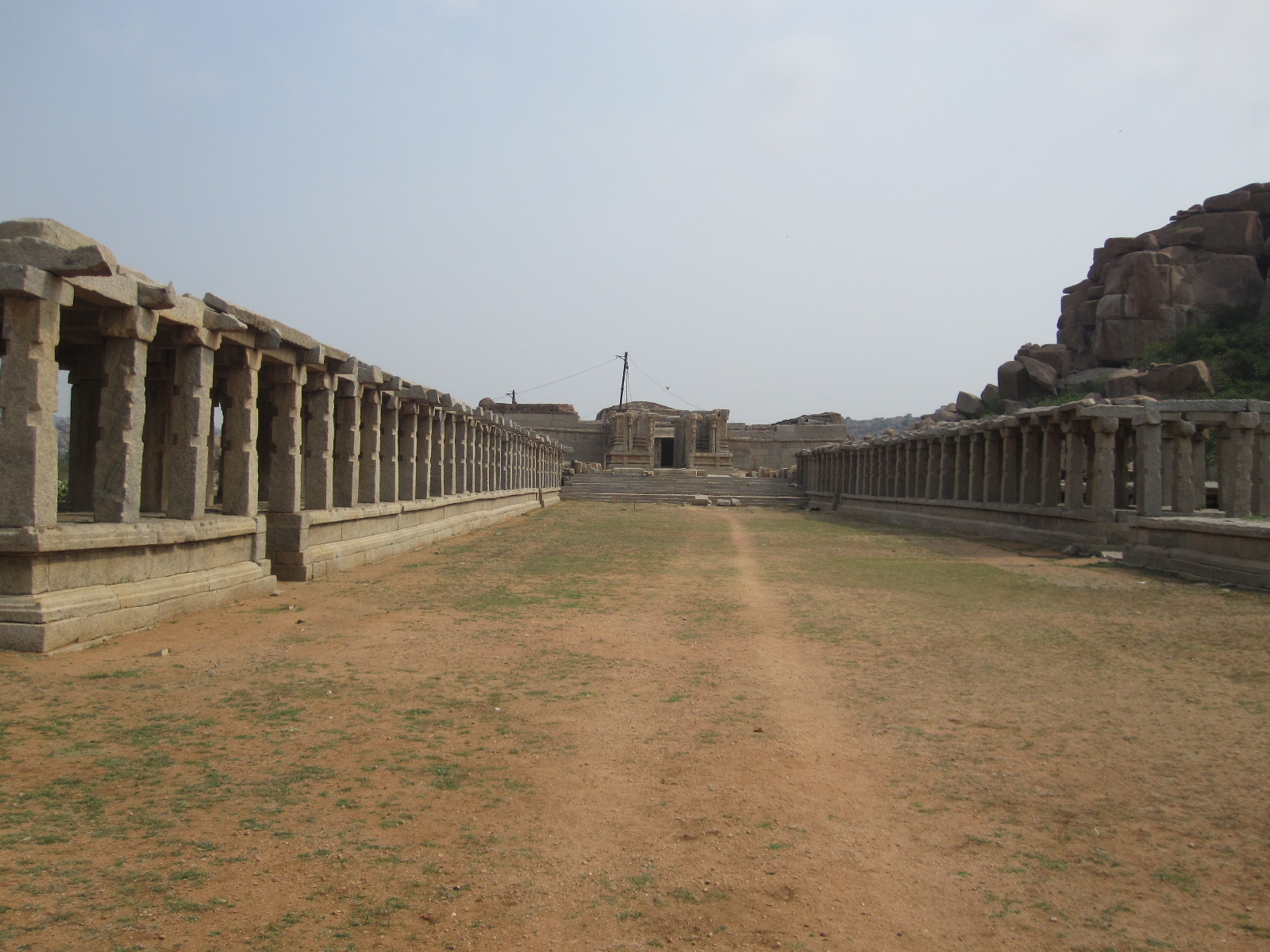 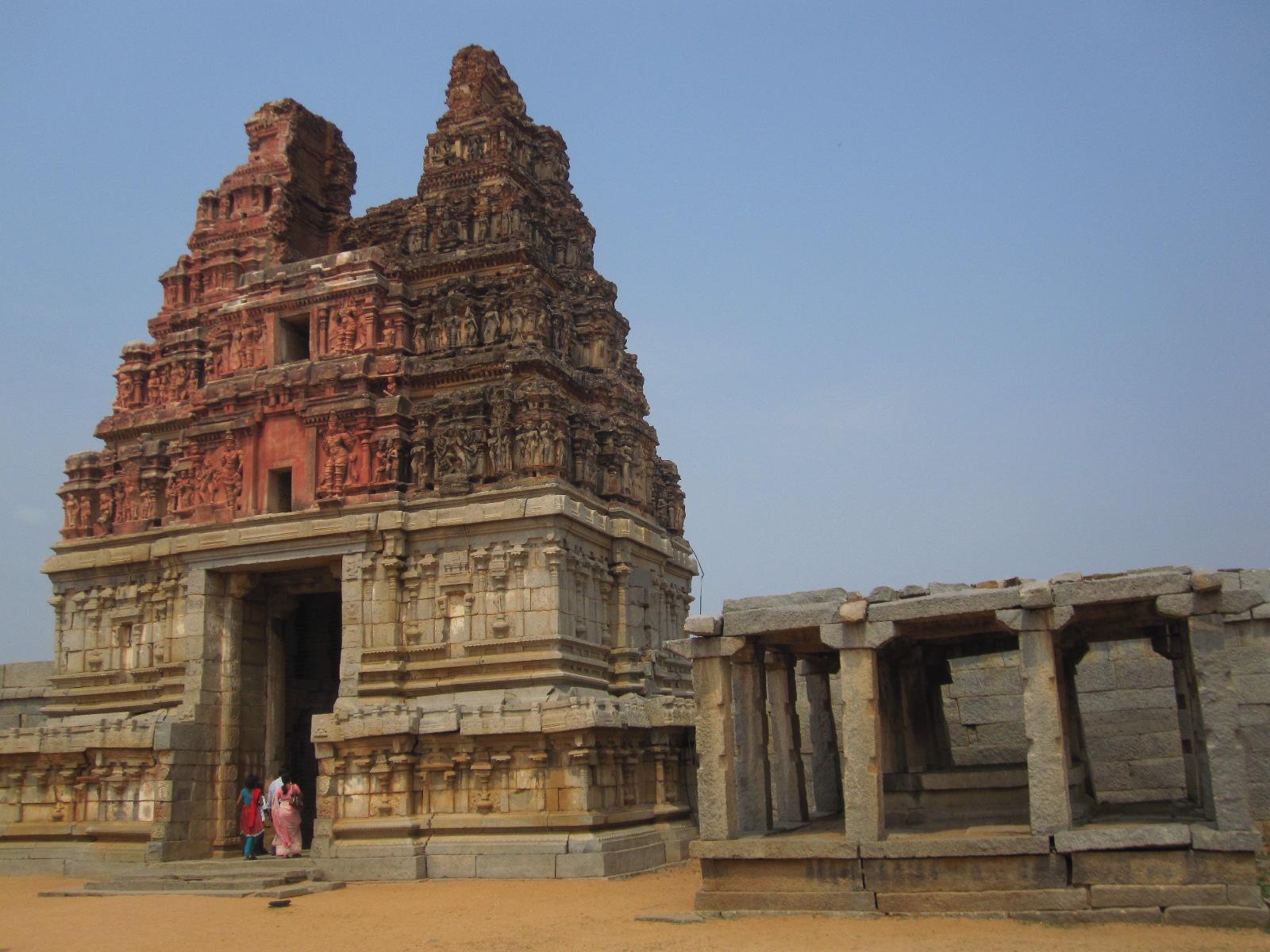 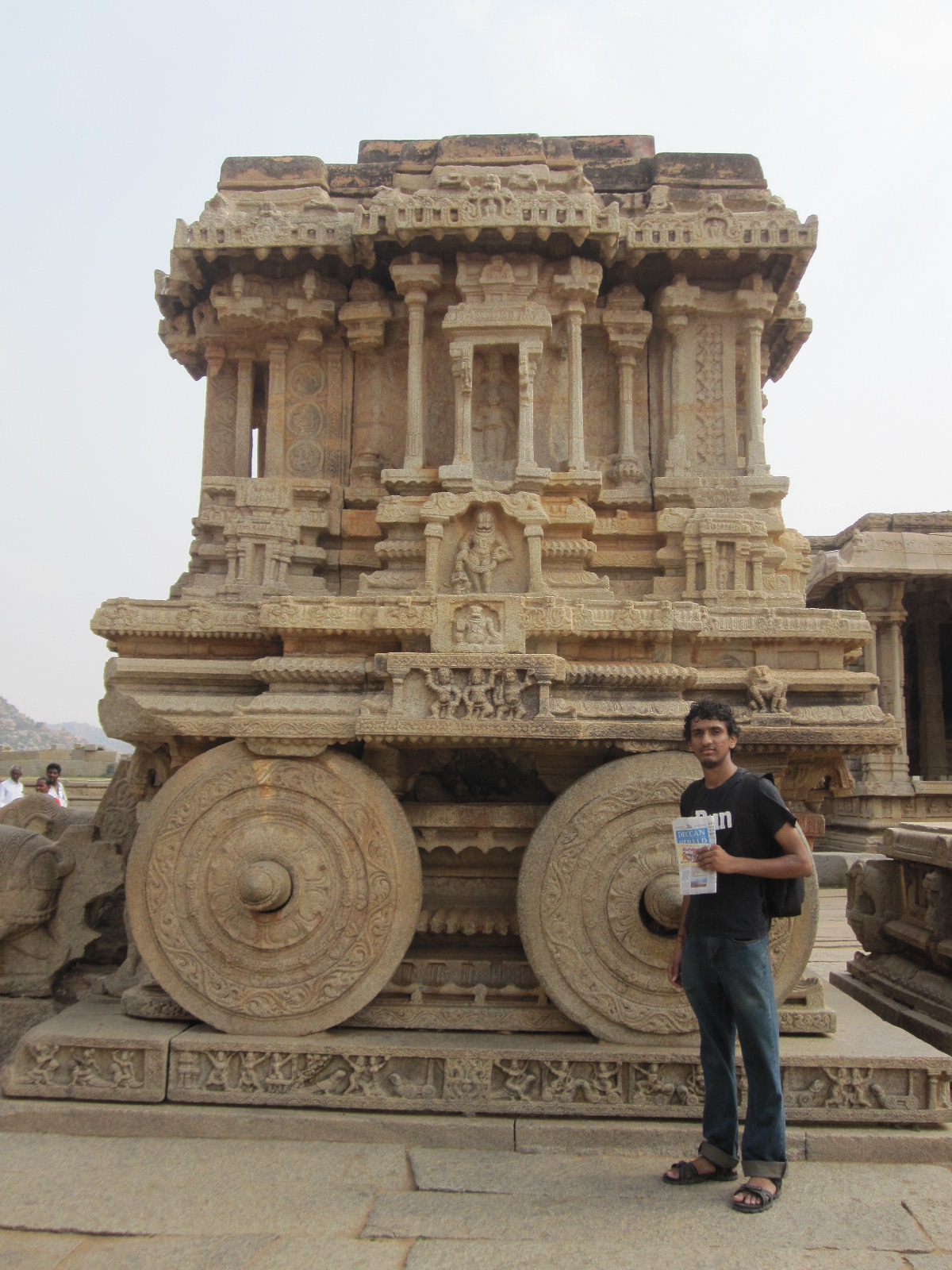 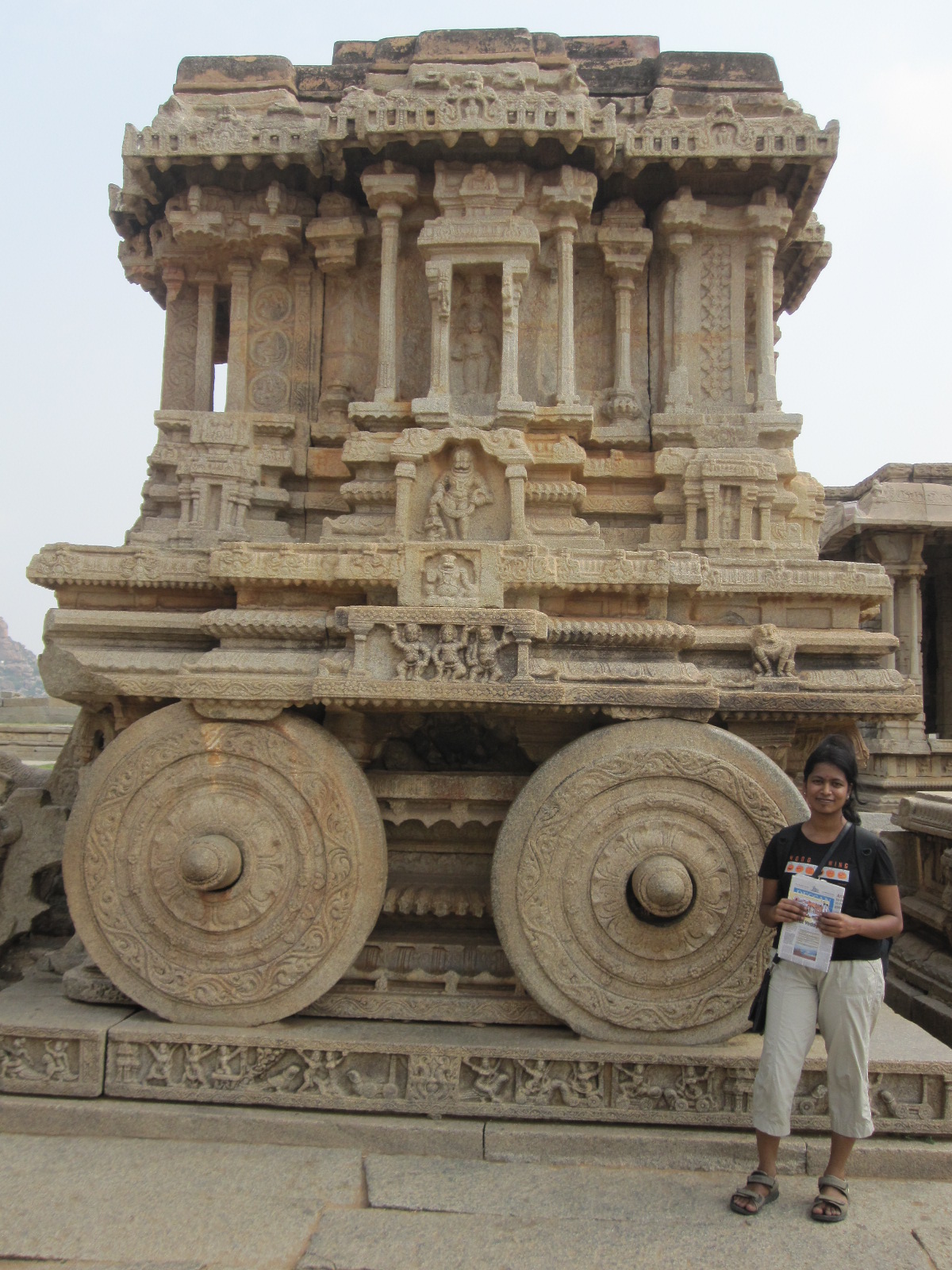 The most interesting thing at Vitala Temple or even the whole of Hampi. I’d say, is the Sangeetha Mahal which houses the musical pillars. Literally, *musical-pillars*. Every pillar, on tapped would raise a different sound – horse shoe. bell, jalatharangam, etc. Super awesome,it was! It wasn’t actually allowed, as there were renovation works going on, but the security fella played them for us, on request. 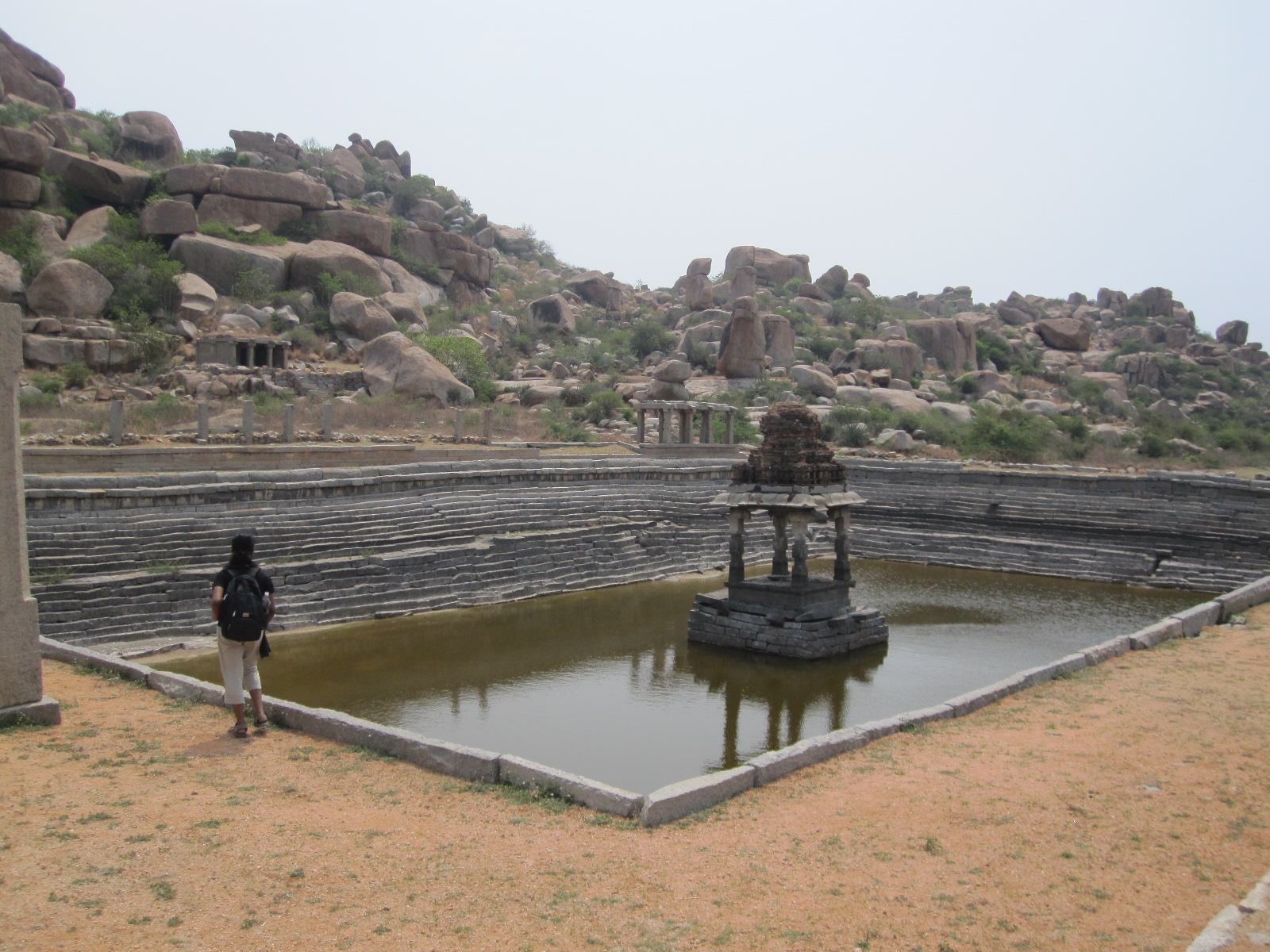 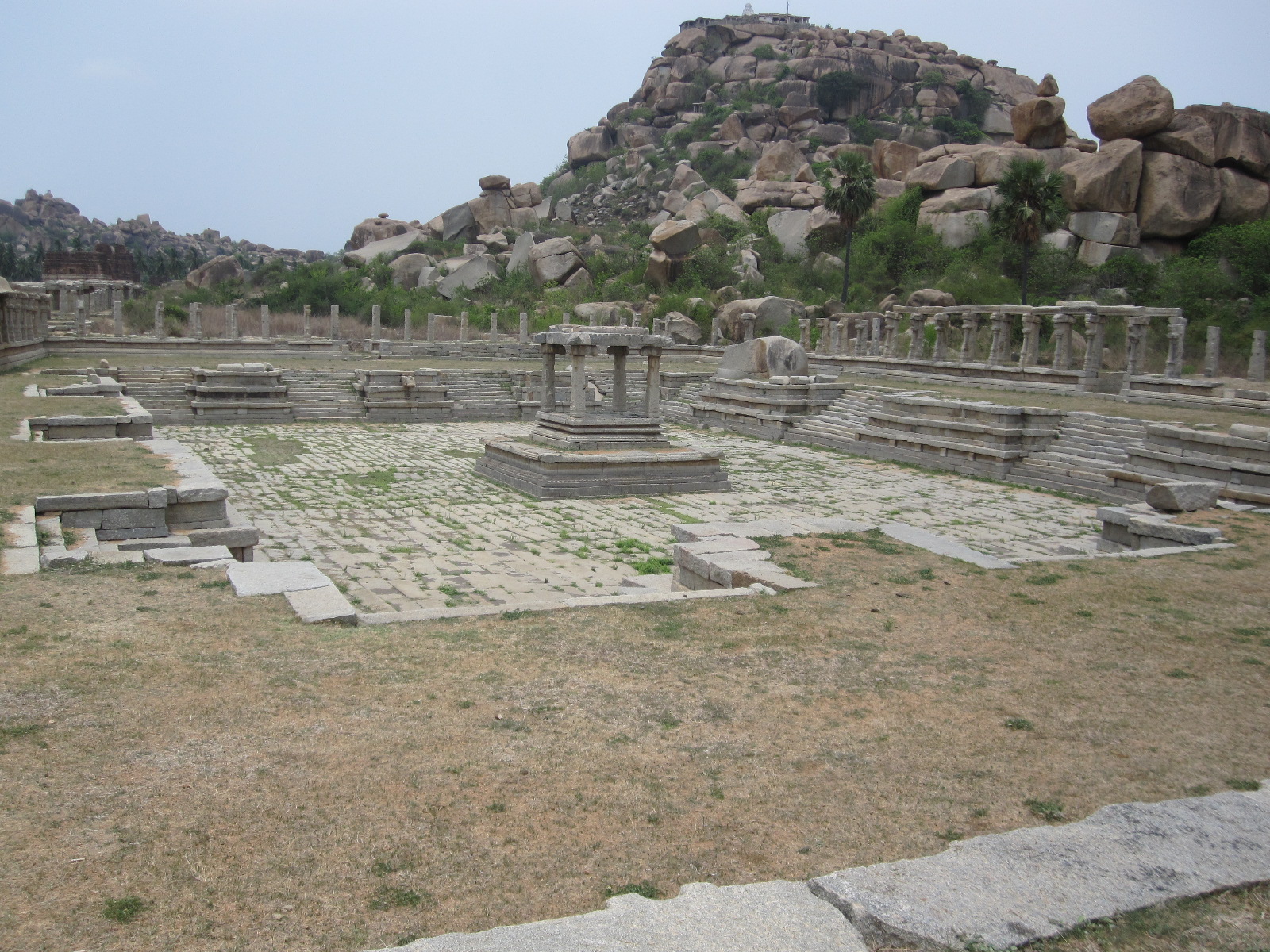 By this, we were already exhausted & it was 2:30pm! We came to the same place where we had breakfast, and I should say, the lunch was decent too. We even put our heads on the table and dozed for half an hour, thanks to the heat! Then we set on for the next half of the day, which started with the majestic Kadalekalu Ganesha! 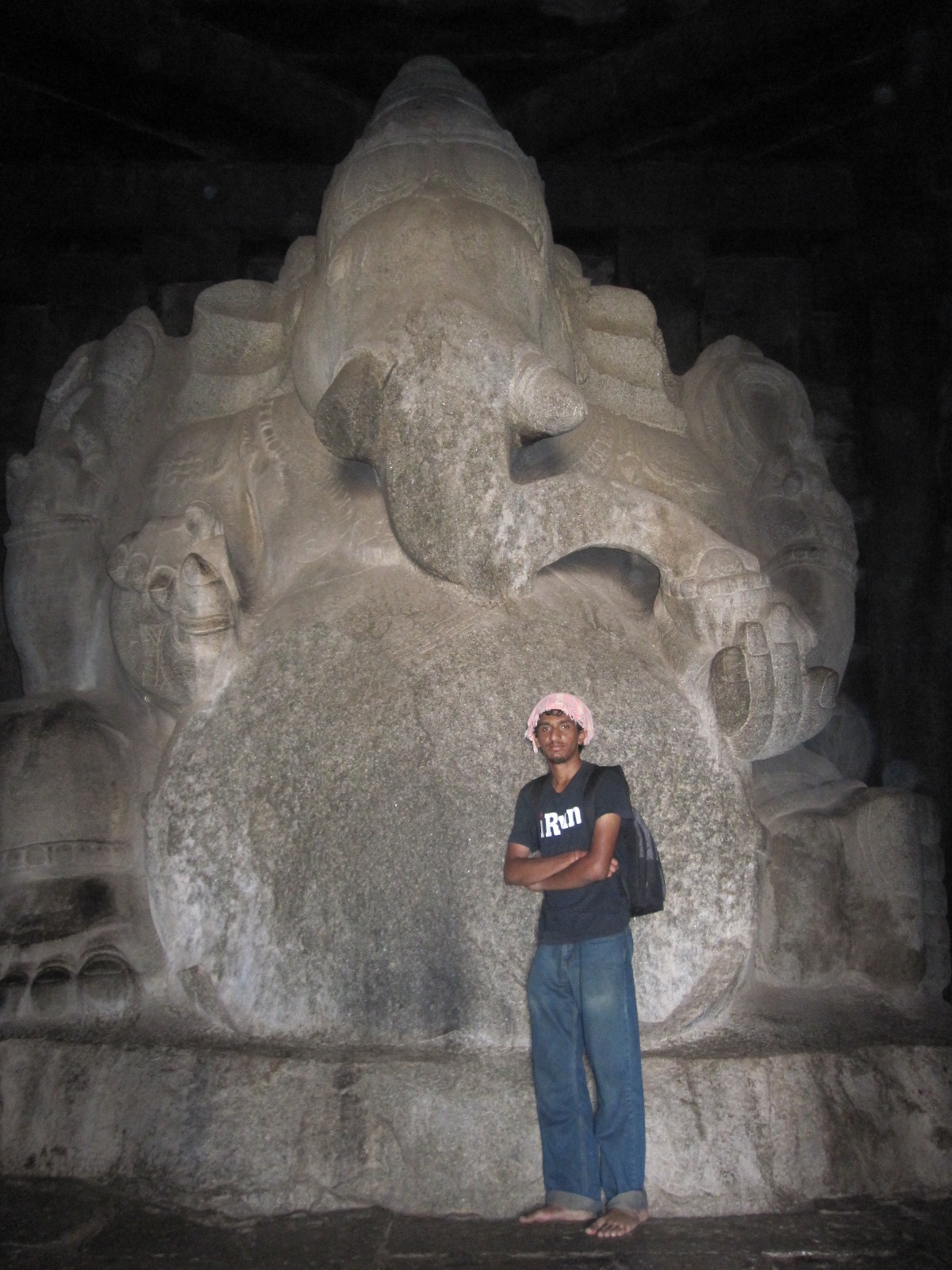 The Sun never seemed to set. So did the list of monuments! We felt as if we were in an endless maze of perfectly carved rocks! But somehow covered a few places and once when we were walking like tired donkeys, a bullock-cart passed by and the *driver*, on looking at our state, asked if we wanted to jump in, and we happily did; and that was the *best* ride of the day! 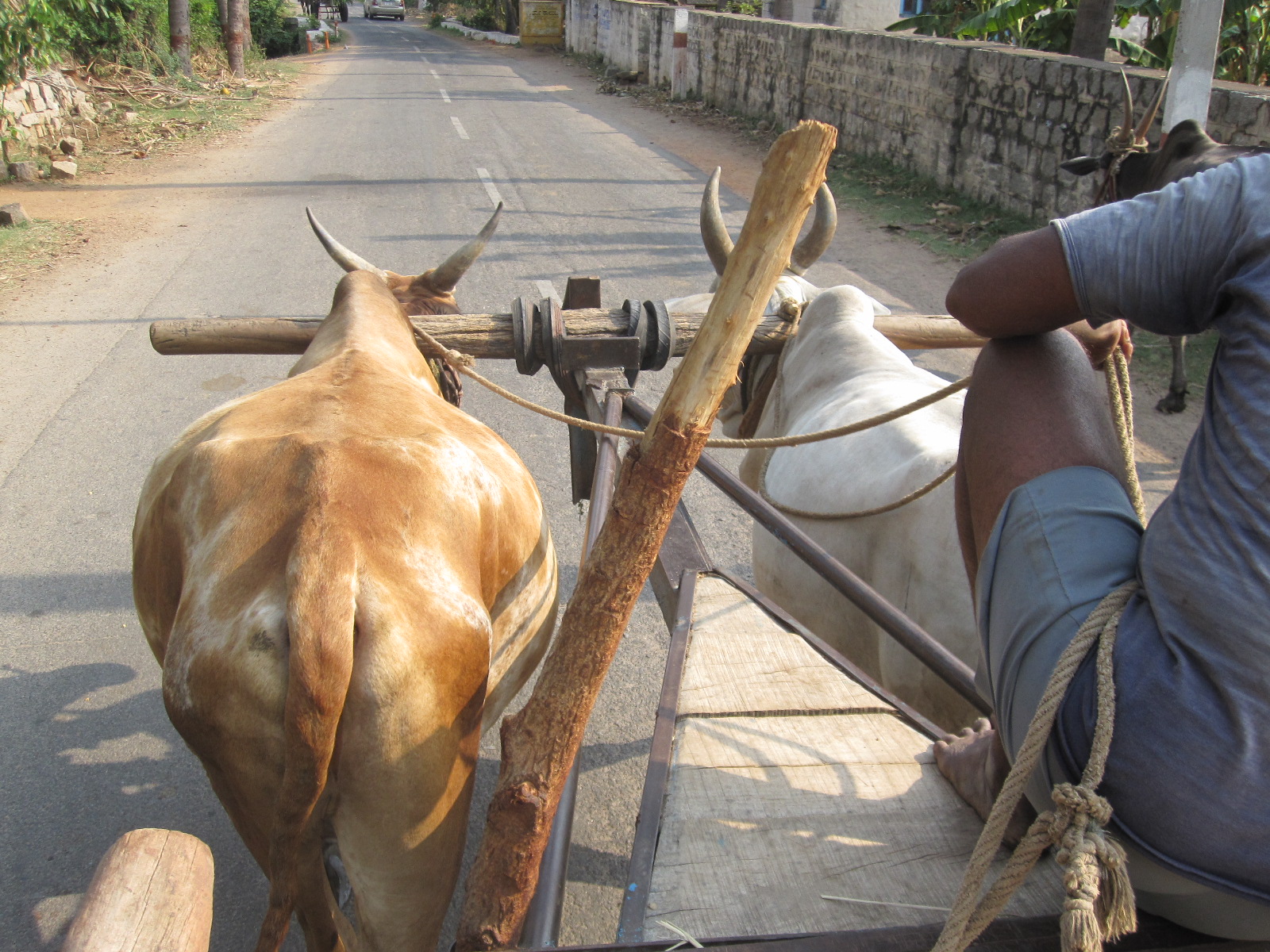 We were left at a junction where there was an underground Shiva temple and the *lingam* would always remain underwater! The whole city was so well planned that there was even rain water harvesting & pipelines all over! But my favorite was the Pushkarani that was designed in the style of Chand Baori, with pyramidal steps! 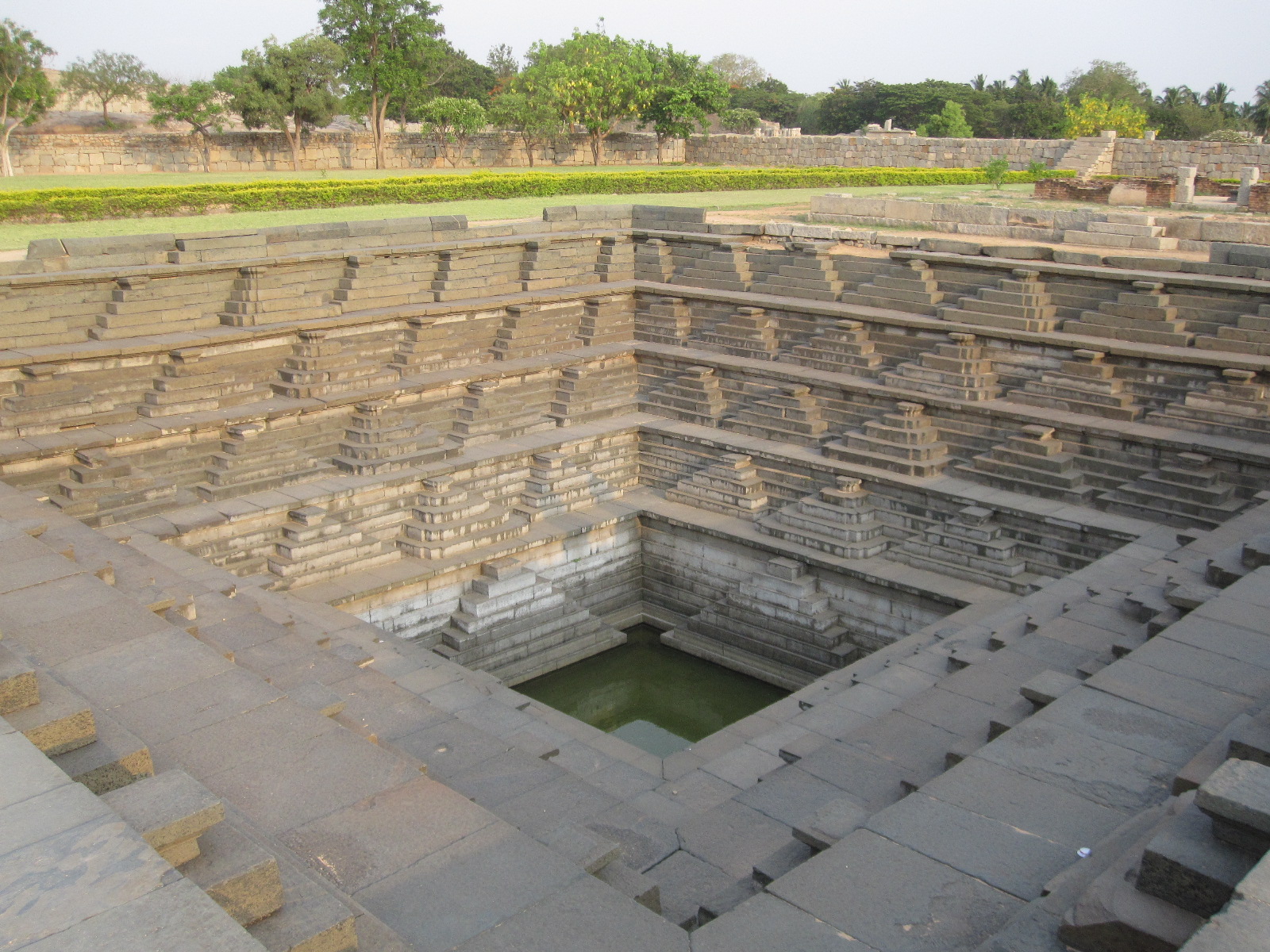 Then there were Mahanavami Dibba, Hazara-Rama Temple, Achyutaraya Temple, etc. and by then, my camera’s battery went to it’s grave. We went back to Hospete for dinner and were already thinking about the next day’s plans for Badami, Pattadakkal, et al. And for refreshing, we walked around a km to the railway station, got a platform ticket, used the waiting rooms, charged the phones & batteries and finally came out alive! A quick list of notable places: –

On Badami, Pattadakkal, etc – next post. Btw, the overall route was THIS. Might be of some help.

https://www.gounesco.com/heritage/proof/23121438905-hampi-preview/https://s3-ap-southeast-1.amazonaws.com/gounesco.com/wp-content/uploads/2012/05/15210500/IMG_4576-1024x768.jpghttps://s3-ap-southeast-1.amazonaws.com/gounesco.com/wp-content/uploads/2012/05/15210500/IMG_4576-150x150.jpg2015-12-24T15:22:15+05:30Raghavan RengachariUncategorizedasia,chariot,Hampi,heritage,india,karnataka,Raghavan,ruins,stone,temple,world heritage travel
So, after completing my first destination - Mahabalipuram, I was back for 2 others - Hampi & Pattadakkal. And one of my friends Maheshwari was too eager to join the trip as well as the GoUnesco challenge! After a lot of primary & secondary research, I arrived at the...
Raghavan Rengacharivrraghy@gmail.comProof_userGoUNESCO | Go UNESCO
Categories: Uncategorized. Tags: asia, chariot, Hampi, heritage, india, karnataka, Raghavan, ruins, stone, temple, and world heritage travel.
« Chola kings and Nilgiri tracks
Pattadkal »