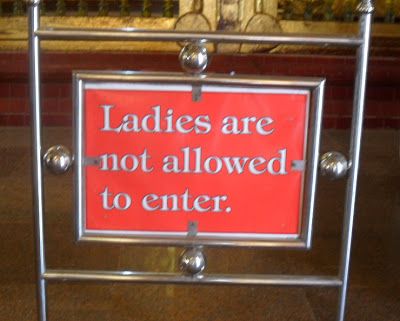 Did you know that heritage is not necessarily gender-inclusive? Well, there are several heritage sites which actually “bans” women from being part of the premises. This is no surprise since a lot of religions consider women unclean and unchaste. Here is a short list.

Mount Omine, which houses a monastery is actually part of UNESCO’s list of World Heritage Sites. From the 13th century, this particular monastery bans women from entering its premises. The explanation for the same being that this mountain is a sacred mountain and men are supposed to be ascetic (according to Japan’s Shinto religion). So, apparently by banning women all feelings of lust also cease to exist!

Though a part of the ban was lifted in the 1960s and women can enter the pilgrimage route, the Ominesan-ji temple is still inaccessible to women. In fact there was a large amount of protest when Mount Omine was included in UNESCO’s list since the practice of banning women is against basic human rights. So, this is not the only mountain or site of heritage to be banned in Japan. Mount Ushiro (also considered sacred) also implements a complete ban while Mount Ishizuchi bans women certain days of the year.

Mount Athos is yet another UNESCO World Heritage Site that does not allow women to enter. This is also owing to the requirement of maintaining celibacy in the premises. In fact the extent to which female presence is banned here is that even female animals are not allows in the premises!

These set of monasteries at Athos (there are 20 of them) are Eastern Orthodox monasteries and the entire 300 sq ft peninsula is out of reach for women visitors. However, there are several other monasteries in Greece where women are allowed. So, women who pay their taxes are frustrated at not being allowed to get in when public money is used to renovate the monastery. In fact there is also a group on Facebook which insists that women be allowed in Mount Athos.

Like a lot of dargahs, the Haji Ali dargah in Mumbai does not allow women into the inner sanctum. The funny part is that this ban was actually imposed somewhere in 2011-12. Recently a PIL wad filed by the Bharatiya Muslim Mahila Andolan which questioned why women should not be allowed since they remember entering the inner sanctums as children. In fact 12 out of 19 dargahs in Mumbai allow women inside.

The Ayyappa Temple in Sabarimala (in Kerala) has history going back to the 1820s. However, the annual pilgrimage to this temple in hills is open only to men. Women between the ages of 10 and 50 are not allowed to go owing to menstrual taboos. Menstruation is considered unclean and hence women of menstruating age are also unclean. Menstrual taboos are not just associated with this temple in India. There are several other temples which strictly mention that women cannot enter the premises during menstruation.

Goa Gajah or Elephant Cave, built in the 9th century apparently used to be a sanctuary in those days. In fact, this site is on UNESCO’s tentative World Heritage Site list. Apparently the site was mentioned in a Jwanaese poem in the 14th century. And this site also bans women on certain days, i.e., like several temples in Indonesia menstruating women are not allowed to enter Goa Gajah either. The explanation is that menstruation is considered being dirty. In fact several temples in Indonesia follow this rule strictly and foreign visitors usually go prepared for this wherever they go. And, no, we still don’t know how they check!

The Mahamuni Buddha temple which traces roots back to the 6th century is a large pilgrimage centre in Burma. According to ancient beliefs, there were only 5 likenesses of Buddha made and this is one of them. Pilgrims flock this place every year and there is discrimination here too.

Women and men have separate prayer lines and men are allowed to go near the likeness of Buddha and place golden leaves. However, the prayer lines for women are far behind and they cannot apply golden leaves to the Buddha statue. Some claim the reason for this is menstruation (basically since it is tough to keep track of menstruating women, they decided to ask women to stay back!)

Apart from this list, there are certain Jain Temples in India which follow the menstruation rule (for example the Ranakpur Jain Temple). Also, the Jain Temples in Madhya Pradesh, India brought about the rule that women wearing jeans will not be allowed in the premises.

So, do you think it is ok to continue to follow such gender-discriminating practices especially in sites of heritage?