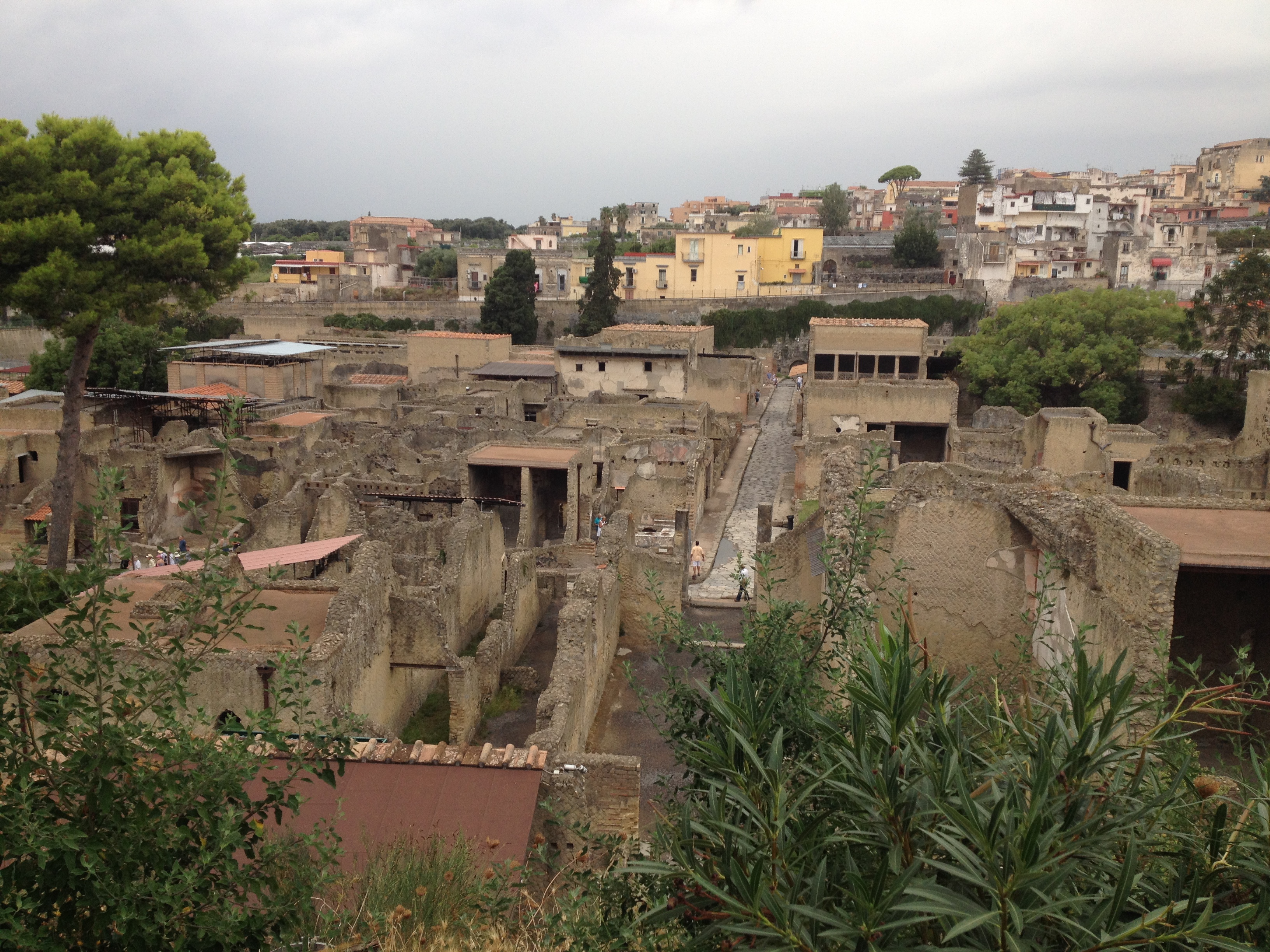 While my stay in Italy I’ve visited a heritage site of Pompei and Herculaneum. They are situated in the region of Campania, next to Naples. 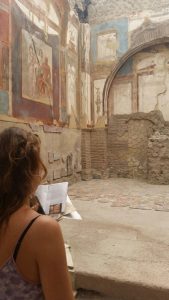 Those are Roman towns tragically buried in volcanic ash during the eruption of the volcano Vesuvius in 79 AD. After the eruption the sites were covered in volcanic ash and flows and thereby remained intact for centuries. At the moment they are one of best preserved archaeological sites from the Roman times, protected by UNESCO; a research field and a very popular tourist attraction. 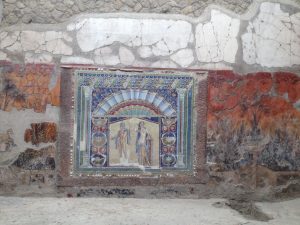 Herculaneum (the Italian name is Ercolano) was a small wealthy Roman town near-by commercial Pompei. The city was distinguished by its fine houses, roman baths, worship places, taverns and luxury villas in the vicinity. It is an extraordinary example of life of the noble Romans in the early Roma Empire. The foundation of the city goes back to the 6th century BC. The settlement was originally founded by Italian tribe of Samnites, but then was conquered by Greeks and later on became Roman.

The city got its name after the mythical Greek character – Hercules, a son of Zeus, famous for its physical power and 12 adventures. Hercules was a center worship figure of the city.

Herculaneum is less popular among tourists then Pompei. If in Pompei you cannot approach the monuments sometimes because of people all over or should you take a picture you have to catch a lucky moment when there is nobody next to you, Heculaneum is relatively calm and empty. Why so?  Pompeii is a much bigger archaeological site with a broader excavated area, it is a city where you can spend hours strolling its streets. The layer of volcanic ash in Pompeii was about 2-5 meters (in comparison with 20 meters of volcanic flows in Herculaneum), that is why it was faster and easier to excavate the site and make it accessible for the tourists. Pompei was open to public in the 18th century and became very popular. Contemporary mass-media and communication channels contribute to its fame and attract tourists all over the world. 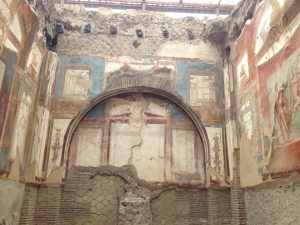 On the other hand Herculaneum is much better preserved than Pompei : buildings, roofs, wooden structures, household equipment, mosaics, ceramics, food and human remains were found in the area. While you are in Herculaneum, you have a feeling to be a real town abandoned a few years ago, the buildings are in a great shape, keeping their beautiful colors and mosaics, the houses have their furniture and households.. you have a feeling that the city is still alive.. 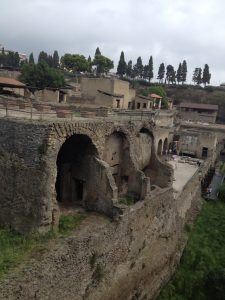 as wondering why and here is what I found out. Because of its luck (if ever we can say so for a city which died in volcanic eruption) during the eruption the wind, blowing to Pompeii on the Southeast caused a massive destruction of buildings by stones, keeping Herculaneum, on the West, relatively intact. Again because of its geographic  luck (misfortune) the site was covered by a much thicker layer of volcanic ash and thereby was more difficult to be dug by robbers, vandals and early archaeologists.

After the eruption of  Vesuvius the city stayed intact till the 18th century when the fists excavations started, although the few tunnels were dug earlier by the thefts to steal everything valuable from the site.

At the moment 25 % per cent of the site has been excavated, while the rest remain buried. The site experiences major preservation problems, as due to the contact of the fossils with the elements, vandalism, tourism and waste water management of a contemporary settlement of Ercolano the archaeological monument deteriorates rapidly.

Herulaneum is truly amazing, it gives you a feeling of travelling back in time and see the Roman life the way it was. You walk on the streets from 79 AD. and see the everyday life of people from those times…but it’s also a scary place, it’s a site of reflection on death. People died in a horrible agony over here, that was a place of grieve and tragedy  back in a day.. Let us ask a question : is it sensitive enough for tourists to stroll the streets of this place and take pictures of the skeletons of people who died in the eruption?

Sharing the Most World’s Most Delicious Heritage: Eid festival at Child Museum, Cairo