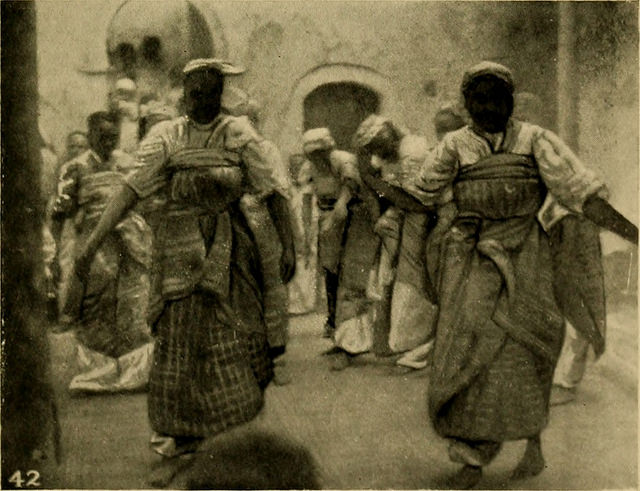 The Hausa community of Nigeria is the largest ethnic group inhabiting the country. They are a culturally homogeneous group, and speak the Hausa language. Daura is oldest city in Hausaland, and  is located in the Northern part of Nigeria.

It is the most commonly spoken language in North of Africa, with around five crore first-language speakers and another ten crore as second-language speakers. Zongos or Zangos are Hausa  communities all across the Northern Western Africa.  They are also called as “camel caravan camps”.

Sunni Islam is the predominant religion of the community. A visible part of the population belong to Tijadi, Mouridi, and Qadiri sufi tariqas. There is also a large concentration of Shia Muslims in the community. Islam was first introduced in eleventh century CE; it was brought by traders and invaders, and with time, grew to become the primary religious faith.

Clothing is  something which gives Hausa culture a distinct visual aesthetic. Men wear a large flowing gown from the shoulder till the knees. Accompanied by a head dress, these gowns are known as Jalabia, and usually have embroidery around the neck. They also wear embroidered caps called Haula. Women can be identified wrapped in cloth called Zani, ,it is a colourful cloth called Atampa, it comes with matching blouse and Shawl.

The homes of Hausa people are primitive in nature, made of simple mud and brick arranged in cubical patterns. The elite have multi storied buildings reserved for them. They cover their building with white stucco and plaster.

The food of the Hausa comprises grains such as sorghum, millet, rice, or maize. They are grounded, and several dishes are made using the resulting mixtures. Usually, a typical Hausa breakfast comprises cakes and ground beans.

No matter what, all cultures across the planet have their own essence which has no time barrier. Culture never dies it just evolve with time. Cultures can’t be compared they evolved differently to meet different needs and in different circumstances all traditions and practices have their own value so stop comparing and start reading.

The evolution of Yoga