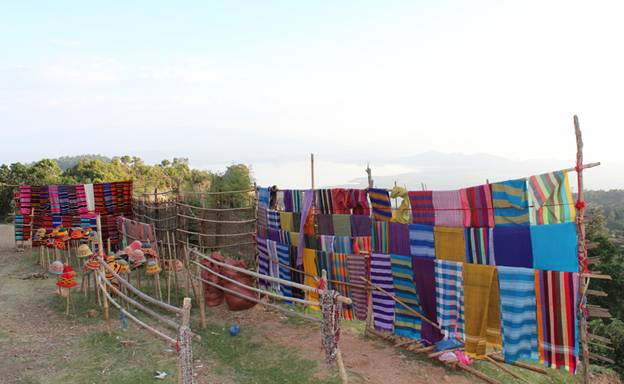 The characteristics of craft as defined by Donkin (2001: 5) are of a certain type of object made by hand, using tools and having functional necessities, and/or methods and production processes. However, it may also vary depending on the different cultural and historical setting of the particular country in which it has originated. This article explores the case of the traditional crafts and craftsmanship of the Gamo community of Ethiopia.

The population consists of a mix of over 80 ethnic minorities with a range of cultural traditions and religious beliefs and the diverse agro-ecology and biodiversity of the locations where crafts are produced means that there is a great deal of individuality in both the methods used and the items created. These crafts can vary from textiles, pottery, and blacksmithery to butcher-tanners that differ from region to region, and group to group with hundreds and thousands of different material traditions in evidence. The objects are usually handmade and woven and often seen as essential household items. Hand-woven cotton textiles and garments are one common example of artisanal traditional crafts and craftsmanship (Note 1). Some of the most impressive weavers of these can be found in the Gamo community based in the southwestern highlands of Ethiopia (especially in the Dorze and Doko communities) (Note 2).

The weaving culture of this area was replicated across the country later on, both during and since the reign of Emperor Menelik (1890s). Nowadays, the name Dorze is used as a synonym for weaving in the capital (and also to describe the weavers from the highlands) (Hofverberg, 2010; Kedir, 2016; Silverman, 1999). Weavers from the Gamo highlands are known to be among the weaving pioneers of the country and are held in high esteem for their superb skill, and for producing exquisite textiles and garments of which the design, style, and structure varies from simple to complex and from place to place (Dubois, 2008; Kedir, 2016; Silverman, 1999). Artisans living within their community and family networks share various roles and responsibilities that are influenced by their socio-cultural settings at the same time (Zelinsky-Cartledge & Cartledge, 1999). The social status of weavers in the highlands is perceived to be relatively distinguished compared to other craftspeople (i.e. blacksmiths and potters), with higher socio-economic status and free from stigma within the community. Their skills, knowledge, and know-how has been passed down by word of mouth from generation to generation, from father to son and mother to daughter. Weaving and related activities are family-oriented and community-based and different tasks in the process of making textiles and garments are allocated to males and females. Females are in charge of hand spun and twisted cotton thread (shallo), and often collect fresh cotton seeds from lowland areas to sell in various forms at the local market (Zelinsky-Cartledge & Cartledge, 1999). Males are usually responsible for weaving and undertaking the remaining tasks necessary to produce the final product. Most weavers build their own pit-style loom made from pieces of timber and bamboo, which they set up near to their main house within their homestead compound or in a separate area used for weaving purposes (Hofverberg, 2010; Zelinsky-Cartledge & Cartledge, 1999). On average, a typical simple white textile cloth measuring 160 x 260 cm (i.e. Net’ala) can be woven in one day (Zelinsky-Cartledge & Cartledge, 1999).

Artisan weavers from this area have migrated to and settled in the north part of the capital Addis Ababa (Shiro Meda) and established a weaving community and speciality textile market. There are also some projects run by different institutions and set up by cooperative groups (i.e. the Gamo Weavers’ Cooperative) within communities to assist in different areas, including the empowerment and development of craftspeople and their livelihoods. Some training in craft and textile development and cultural heritage projects such as Artisanal Crafts Development has also been introduced through different Ministries as a part of their commissioned projects (Dubois, 2008). However, in order to be effective, this training and curriculum development must be tailored to meet the requirements of different socio-demographical settings and learning processes (Hofverberg, 2010; Yishak & Gumbo, 2014). In recent years, the country has been going through rapid changes and growth in different sectors and regions. Progress needs to be made to ensure that the traditional skills used to produce these handicrafts are not lost and that their production remains sustainable in the future. In order to achieve this, there is an ongoing need for partnerships between different institutions to sustain and conserve as well as to safeguard this tangible and intangible cultural heritage which is often marginalised and on which rural people depend for their livelihoods.

One of Ethiopian proverb says that “Gold in one’s hand is like copper” which can be translated to mean that individuals should not undermine or forget the beauty and value of everyday life experiences (Silverman, 1999: 3).

Bullukko (Bulluko): a traditional garment used to cover the whole body, worn by women and as over-wear for men and nightwear for family members.

Gabbi: a four-layered textile similar to a light-weight blanket, worn only by men.

Net’ala (Netela, Netala): a large scarf-like cloth of two thin layers, usually measuring about 160 x 260 cm (63 x 102 inches). There are two variations in type, one with a single colour and another with many different colours and patterns.

[2] Geographically, the highlands are located about 500 km southwest of the capital Addis Ababa, covering a tenth of the country’s total area. The altitude of the highlands varies from between 1,800 – 4,200 m above sea level and the area stretches from the west of the country, where it is flanked by the Great Rift Valley to the lowlands of the south. The area also is known as one of the most agro-ecologically and -biologically diverse areas in Africa. People who live in the area are predominantly agrarians whose livelihoods are also dependent upon various off-farm activities such as weaving, pottery, and blacksmithery as well as petty trades.

Yishak, D. M. and Gumbo, M. T (2014). The Marginalisation of the Gamo Ethnic Group through Curriculum Planning and Processes in Ethiopia. Mediterranean Journal of Social Sciences, 5 (10), 285 – 294.

Why poetry of Kantha embroidery needs a revival