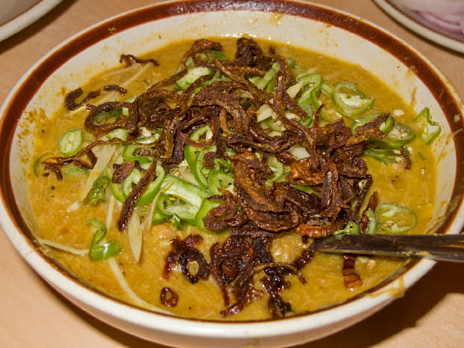 Growing up in Hyderabad in southern India, I’ve always looked forward to the holy month of Ramzan (Ramadan, in Arabic) as it involves annual rituals such as meeting the entire extended family, receiving gifts from all the elders, and of course gorging on our traditional delicacies. I think it would be safe to say that Ramzan in Hyderabad these days is less about the fasting and more about the feasting, and the feasting often carries on from dusk till dawn. It’s an interesting paradox, as the month of abstinence has instead become a celebration of tradition, culture and family. And of course, at the centre of the feasting is always the haleem.

Quite possibly Hyderabad’s biggest claim to fame after biryani and the Charminar, haleem is prepared by slow cooking cracked wheat, barley, and meat along with various spices for several hours. The end result is a delicious thick, coarse, brown paste that is eaten with fried onions and mint leaves with a few drops of lemon squeezed on top. But had it not been for the Arabs, this dish might never have become such an essential part of Hyderabadi culture.

The origins of haleem lie in the traditional Arab staple called harees, which is a paste of wheat, meat, cinnamon and ghee. This dish was brought to the subcontinent by Arab soldiers from modern day Yemen who were recruited into the Nizam of Hyderabad’s army. The reasoning was that while local soldiers might defect to one of the neighbouring hostile states, the Arabs would not. Along with their fighting prowess, they brought their food and culture to Hyderabad which eventually became intertwined with the local culture. According to the Times of India it was the integration of these Arabs into the local populace which created this hybrid cuisine. This is very much a reflection of Hyderabadi culture, which has been influenced by various outsiders over the centuries, creating a unique language, culture and cuisine right at the heart of India that is completely different from the neighbouring regions.

Over the years, haleem has become the popular replacement to the harees initially being served in restaurants. First served publicly in 1953, its popularity has grown to the extent where it has amassed a cult following today. Haleem is a unique example of a dish from outside the subcontinent being turned into a local delicacy. Today it is the traditional Ramzan food in Hyderabad and breaking the fast at iftar is often considered incomplete without it. But while the Arabs can claim credit for introducing their cuisine to our palates, the local Hyderabadis are to be thanked for adding signature ingredients to really bring out the flavour of this delicacy. Haleem today is as Hyderabadi as it gets, and is one of the city’s proudest exports.

Nothing tastes quite as Hyderabadi as haleem.

Turkish Coffee – A Future Oriented Culture from the Past