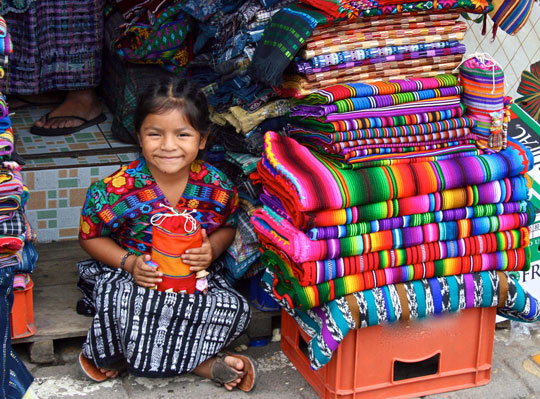 You cannot visit Guatemala without noticing, and falling in love with, its exquisite, multi-coloured textiles. These beautiful hand-woven fabrics are a fundamental part of Maya culture. However, their primary use has now shifted from traditional dress to tourist souvenirs.

Historical Background
From around 250 AD Guatemala was home to the Maya people, one of the largest and most sophisticated civilisations of the ancient western hemisphere. At its peak the Maya had a population of roughly 2 million people and 40 sizeable cities across Mexico, Guatemala, Belize and western parts of Honduras and El Salvador. They had a very strong belief system, practiced advanced architecture and astronomy and were the only culture in the western hemisphere to develop a system of writing. The Maya were also highly skilled in the production of artistic artefacts, be this jewellery, ceramics or sculptures. However, one of their most revered artistic traditions is the production of complex and colourful textiles.

For around 2000 years weaving has been an important part of Maya culture, a vital part of their identity and central to their traditions. The value the Maya placed on this craft is apparent in the fact that the civilisation has a god of weaving-Goddess Ix Chel. In fact, this fact is indisputable when you look at a traditional ceremony undertaken for the sole purpose of ensuring the survival of the craft. This ceremony involves the Maya midwifes bathing baby girls, when they reach 3 weeks, and then passing miniature weaving instruments (such as thread, loom, basket and needles) over the baby’s open hands while praying that the baby girl will become a proficient weaver, and maintain the ancient weaving art traditions.

Therefore, it is clear weaving was a imperative part of Maya culture, more than a form of artistic expression. In fact some historians go as far as describing weaving for Maya women as being a semi-sacred action, connecting them to Ix Chel. Especially as symbolism was a key part of the Maya belief system and this made it possible for weaving to actually become a form of philosophy, depicted information about their history, identity, beliefs and myths. Thus, increasing its significance further in society.

In addition, the fabric played a central role in Maya society. For example, the vibrant textiles became useful status symbols. Beautiful, vibrant woven fabrics showed skill and a source of wealth. Noble girls were taught the same method of weaving as the ‘commoners’ but often used higher quality cotton and made more complex, decorative pieces. This idea is also supported by the knowledge that textiles were often given as tribute to rulers and nobles.

The textile also played a vital role in their cultural traditions, specifically their ceremonies. For instance, the textiles were often used as marriage gifts to the family and the woman’s skill playing an important factor when deciding on a bride. Certain fabrics were also used for different Maya ceremonies.

Maya communities also often developed their own preferred style of weaving, demonstrating specific patterns and colours. Thus, the fabrics became an ‘identity’ for the community identifying the wearer’s status and their origin to all. This, I imagine, only increased the communities, and culture’s, pride in weaving and textiles.

Therefore, no one can doubt the importance of Maya textiles as individual pieces but also how they played an integral role in in Maya society.

The Weaving
Contemporary weavers are descendants of the ancient Maya civilisation, practicing a time-honoured tradition passed on from generation to generation. In fact, even after centuries the techniques for weaving the traditional Mayan fabric remain relatively unchanged. The ‘backstrap loom’, used to weave the fabric, actually even looks the same as the ones painted onto Mayan sculptures and ceramics 1200-1400 years ago!

The loom has remained unchanged, as it has perfectly evolved to fit the Maya way of life. A very effective, yet simple, piece of equipment which can easily be hand-crafted from local wood. It is also light, portable and can be set up anywhere; perfect for a busy woman fitting weaving around her domestic duties and childcare. The loom consists of two horizontal dowel’s (one at each end of the loom to keep the vertical threads (the warp) in place) and 6/7 parallel rods (to secure the vertical threads along the length of the loom). One end is then attached to a tree/post and the other around the waist of the sitting craftswoman to pull the threads taut. A shuttle is then used to pass thread (the weft) through the warp attached to the loom.

However, before a woman could weave, traditionally she would first hand spin cotton into yarn (by using a spinning whorl) and colour it with the natural dyes they have used for generations. Below are some of the colours used by Maya women, what they symbolised in their textiles and the main ingredient in the dye:

Sadly, the number of Maya wearing the traditional dress is decreasing rapidly but the art is being kept alive by the increasing tourist trade. So get to Guatemala quick to pick up a truly beautiful piece of art! 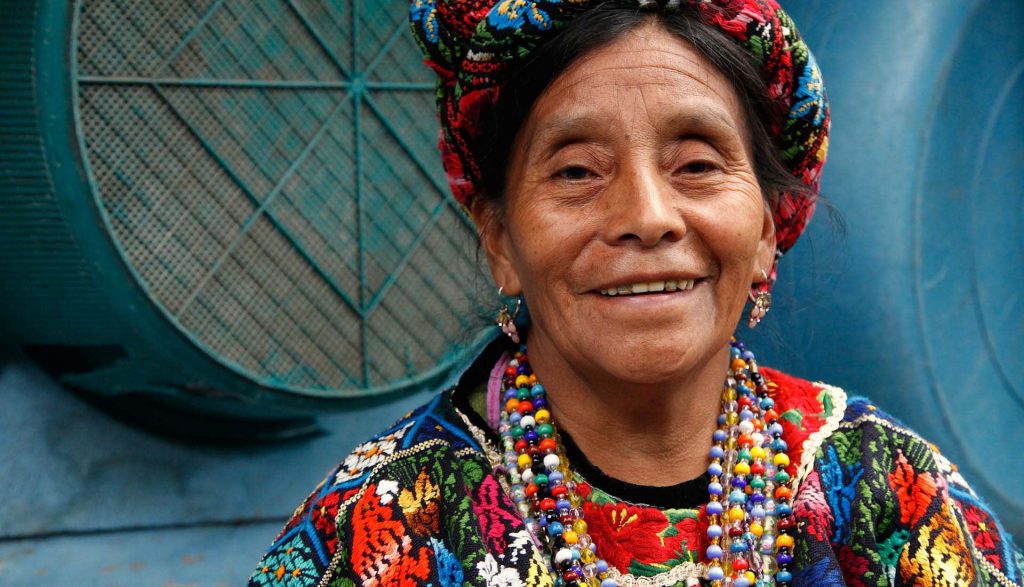