Hungary is an agricultural country and one of its most important products is wine (maybe you have heard about Tokaji Aszú). If you go across the country, you can see vineyards everywhere – on the Great Plain, on the hills and also on the lower parts of the mountains. Thanks for it, many folk customs are connected to grape harvest in autumn. Probably, the Grape Harvest Festival is the most amazing among them. The festival is different in each regions, I would like to introduce you the traditions in my native village. Here, as generally, the Festival is an all day activity, which starts at down, finishes at night and its peak is the dance of the Csősz. But who are the Csősz?

They were the guards of the meadows and vineyards. Moreover, they are the main characters of the Grape Harvest Festival. In every year, the Csősz boys open the event around 6 in the morning, when they go around in the village on horse-drawn carriage accompanied by musicians, singing Hungarian folk songs. Thus they wake up everyone reminding them that the Festival is starting. Later, around 2 in the afternoon the so called Csősz dance starts, which I want to introduce you a bit more detailed.

The dance of the Csősz is performed by young boys and girls, who dance in pairs in traditional Hungarian costumes. Boys wear long black boots, white, wide leg trousers, on their lower part with a ribbon in the Hungarian colours (red, white, green), white shirt with wide sleeves, black waistcoat and black hat with ribbon. As for the girls’ costume, it consists of black boots, white skirt with Hungarian ribbon and with many petticoats. On it, there is a green or red apron. Besides, girls wear white shirt, red waistcoat, and párta, which is a kind of headdress. The girls’ apron and párta have traditional Hungarian golden braiding.

Before the dance, the Csősz give colourful ribbons to their partner, pinning them up into their hat or párta. After it, they sit onto horse-drown carriages and go around the village. The march is lead by young horse-herds who crack whips, and closed by a carriage which transports musicians who play folk music during the parade which lasts for more than 2 hours. The march goes around the village and stops on different parts of it. In these breaks the dance of the Csősz is performed. During it, musicians play folk music on harmonica, violin etc, the Csősz sing, and march on the streets and during it they dance. They go in two rows. They perform the same dance in each stop. Although, the Csősz are not professional dancers, they always dance whole-heartedly.

At the end of each performance, citizens offer the dancers cakes, juices, wine and also pálinka (one kind of national short drink). The Csősz continuo their tour until the next stop where they dance again. They repeat the march and the dance 4 or 5 times until they arrive to the city centre. Here they perform the dance for the last time, and in addition, they show an other traditional dance, but at that time in new costumes. The performance is followed by other programs and at night a ball starts on the street.

The best thing in this event is that before it, all the citizens join forces: youngsters prepare for the dance performance, the teacher teaches the dance for free, for fun, the citizens decorate the village and the stage, they prepare foods and drinks for the dancers, and people owning carriages and horses (also people from the neighbouring villages) carry the Csősz around the village. Besides, people who cannot participate in the preparations, e.g. because of health problems or because of their age, also can enjoy the festival by watching the dance. Everything is only for fun and in order to cultivate the traditions, celebrate grape harvest. I think it is a very rare but beautiful phenomenon in our days.

I feel myself very lucky, since I have participated in this occasion many times not only as a observer but as a Csősz and as a wine girl. As a wine girl, I wore traditional clothes and my task was – among others – to decorate the carriages. During the march, I and my fellows travelled on a special carriage, which transported a wine-press and a wine barrel. We offered wine to the tired coachmen and accompanied the Csősz during their dance. Besides, to make citizens happy, we throw grapes onto them during the march.

On the other hand, based on my experience, the best thing is to be a Csősz, a performer. First of all, learning and practising the dance is a great experience. I remember that I always enjoyed this activity, also in hot summer days when we could not stay inside, we had to go out to the fresh air to practise our dance. Performing also offered me a special feeling. I could live over traditions again and in the disguise, I could feel myself in the 19th or 20th century. Seeing people happy, having fun, forgetting about their everyday troubles was also a fantastic feeling. People, who have participated in the dance of the Csősz, want to go back again and again.

Unfortunately, as we become older and older, we have less chance to do it. We work or study hard, maybe we go abroad for a while and we become busy. However, for this one day, for the Festival, we all return to our village, return to our routs, celebrate together, and recall sweet memories.

Finally, I would like to share with you some links where you can listen traditional Hungarian folk songs which the Csősz may sing during the festival: 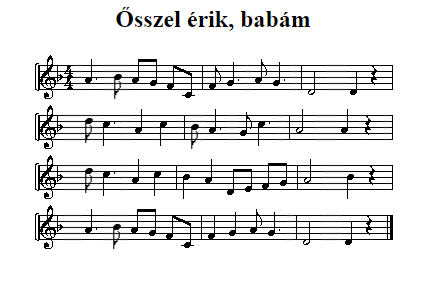 Crosswords on a performing art in Nairobi

Bal-eth-nik: Review of an Atlanta reality