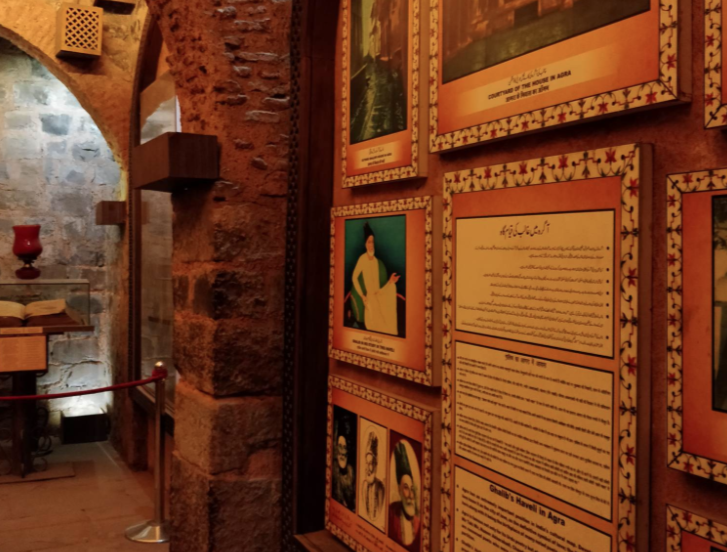 Mirza Ghalib is an Urdu and Persian poet in the royal court in Delhi. He was the one who saw Delhi burn, and is considered as one of India’s greatest poets. It is said that if he was a English poet then he would have been considered as the world’s greatest poet. He is most famous for his letters and Urdu poems.

Miraz Ghalib’s haveli is located in Old Delhi, Ballimaidan road. One needs to reach Chandini Chowk first and  then navigate the paratha wali galli to access it. Mirza Ghalib Haveli is an important part of Indian built heritage, as declared by ASI. However, it is not on any tourist site or list, many people don’t visit it. A major part of the Haveli had been illegally taken over by shops till around 1999. In 2009, Shila Dixit ordered its reconstruction and restoration, and  since then its maintained by Delhi Government.

The site offers cues that indicate the lifestyle of Mirza Ghalib, his daily routine, and his poetic process. The large compound of the Haveli with columns and bricks are remains from the Mughal Empire in Delhi.

The walls are adorned with huge portraits of the poet and his couplets which are hung all across the walls of the Haveli. After the takeover by the Delhi Government, the Haveli was made into a permanent memorial museum. The museum houses a life-sized statue of Miraza Ghalib.

After coming from Agra, Ghalib lived in this very building for a very long period of time where he composed many of his favourite works in Urdu and Persian which came to be known as Diwans. The building was made in the conventional Mughal style using Lakhori bricks and lime mortar.

A visit to Delhi warrants a glance at this hidden gem, which has been transformed through the efforts undertaken by state machinery.

Lalbagh Fort- an architectural marvel of the Mughals