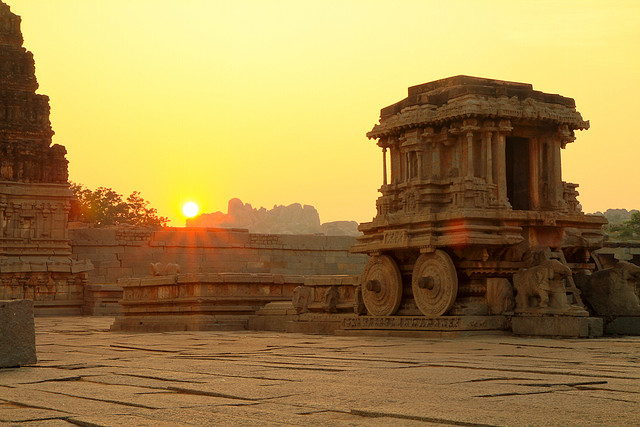 Situated at Karnataka, India, is the once-majestic and imperial capital of Vijayanagar empire- HAMPI. For those to whom Vijayanagar empire is unknown, it is home to the one and only witty legend, Tenali Rama, one of the “ashtadiggajas” or the eight poets at the court of Krishnadevaraya. The ruins at Hampi are titled as World Heritage Site by UNESCO.

The arid area with numerous boulders stretch over a vast area, giving quite a stunning view.

500 plus monuments dot the backcloth of this wide stretch of arid landscape, among which there are beautiful temples, palaces, stone carvings, ancient market street – the list is quite endless and it may nearly take more the 3 days to explore its heritage.

Hampi is nothing but a bundle of surprises. Every monument here embraces a mystery, a story that unfurls on keen exploration.

Built on the southern banks of Tungabhadra river, earlier known as Pampa- Hampi, traditionally called Pampa Kshetra. The historical settlements have been found to date back to 1 CE. Surrounded by hills on 3 sides and by river on the other side, Hampi marked a strategic spot for setting up capital of Vijayanagara empire.

” A forgotten empire ” is what Hampi is referred to by Robert Sewell in his remarkable book which describes the rise and fall of Vijayanagar empire. Well before the fall of this prevailing empire it was said that diamonds were sold on streets. The main circle where this used to be done was the Pan Supari street. The ruins of this street is still found at Hampi and is even acknowledge today by archaeological department of India.

Every year, during the first week of November, Hampi festival is celebrated with full bliss, the ruin structures are all lit at night and is quite a gala. People celebrate their cultural vibrancy and heritage.

The year 2010 was celebrated as 500th year after their beloved king Sri Krishnadevaraya ascended to throne.

The LAkshmi Narasimha statue at Hampi is one of the most majestic sculptures among the ruins. Located at the southern side of the Hemakuta group of temples, this statue is the largest monolithic statues of Hampi and is a wide attraction for tourists. The original sculpture had a small figure of Lakshmi sitting on Narasimhas lap carved on to it. During the fall of empire this statue was wrecked and  the figure got separated.

In the above image one can see the river side ruin site, a Linga, symbolically representing Lord Shiva,  with people worshiping it.

Lingam of Lord Shiva- 1008 lingas are carved on the rock surface at the Tungabhadra beds.

The structures at Hampi seriously does speaks for themselves. Each structure has its own story and heritage that it shares.

This photograph is of a triple headed Nandi that can be viewed inside the Virupaksha Temple, also known as the Pampavathi temple. This temple is one such treasures of Hampi as it predates the founding of Vijayanagara Empire.

First rays of sun captured at the stone chariot, Vittla temple. The stone chariot is the foremost attractions at Hampi. The Chariot as the name suggests is not exactly a chariot but is a shrine built in the form of a chariot with giant granite stones. Mythical battle scenes have been engraved onto the structure.

The nearest airport is Hubli, 143km away from Hampi. Flying can get expensive as well as time consuming.

The closest railway station is 13km away at Hospet.

These are just some sights that mark the architectural beauty and significance of this culture brimming site, there are lots more to add on to its grandeur. Hampi is most certainly worth the visit.