Located between the Weme River in the Republic of Benin (RPB) and the Ogun River in southwestern Nigeria, western Yoruba-speaking people (Ketu, Egbado, Ohori, and Anago) are renowned for an elaborate masked performance tradition known as Gelede. The Gelede spectacle of the Yoruba is a public display by colorful masks which combines art and ritual dance to amuse, educate and inspire worship. One of the most vibrant traditions of Africa, Gelede is an intangible heritage that fascinates people all across the globe.

– an elderly women worshiped as “our mothers”

Gelede pays homage to the spiritual powers of women, especially elderly women known affectionately as “our mothers”or ‘awon iya wa’. The powers possessed by such women, comparable to those of the gods, spirits, or ancestors, may be used for the benefit or the destruction of society. If angered, they can bring down individuals and entire communities. Thus Gelede serves the function of appeasing this power, as well. Gelede maskers entertain and enlighten the community and “our mothers,” pleasing, placating and thus encouraging them to use their extraordinary powers for the well-being of society. Gelede performances are thus a sacrifice, ebo, an appeal to forces in the world using the aesthetic power of masks, costume, music, song and dance to evoke and comment upon social and spiritual matters, helping to shape society and those within it in constructive ways.

The Gelede takes place every year after the harvests, at important events and during drought or epidemics and is characterized by carved masks, dances and chants. These performances take place in the marketplace, the domain primarily of women:

The Gelede spectacle begins with a night ceremony known as Efe. A series of masked dancers culminates in the appearance of Oro Efe, “the Voice of Efe”—an elaborately attired masker who moves through the crowd singing and dancing.  His elaborate headdress is covered with images of power both spiritual and physical—leopard, snakes and knives evoking the iron and war god Ogun and birds signaling the sacred powers of women.  The grandeur of his ensemble and the poetic imagery of his songs evoke a masculine authority sanctioned by the powerful women who are the honored guests and patrons of the performance.  The songs, which last until the first light of dawn, comment on diverse matters both sacred and secular.  Oro Efe critiques antisocial persons and events, and praises those who have worked positively for the coty. 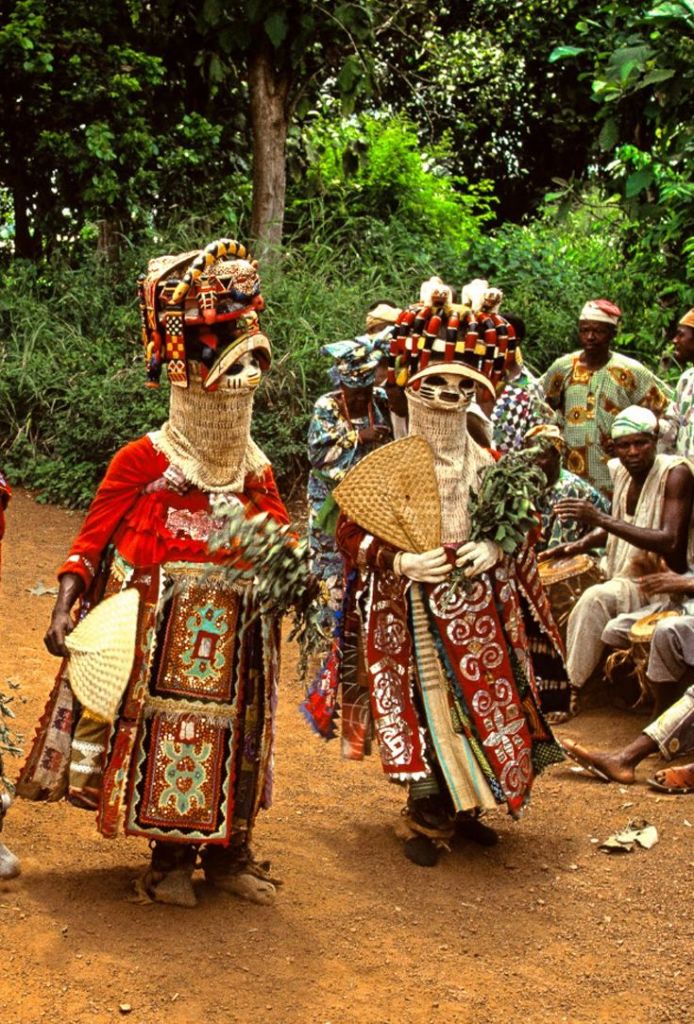 The afternoon after Efe night is reserved for the performance of an elaborate series of Gelede maskers whose images and actions embellish and intensify reality to create exaggerated visions of maleness and femaleness and specific social groups and roles. The maskers, all males, impersonate both men and women.  The first to appear are the youngest dancers, enthusiastically encouraged by friends and relatives who gather around them as they attempt their first steps to the intricate, changing rhythms of the drummers.  Their dance instructors in the Gelede society follow closely, giving advice and encouragement during the performance. 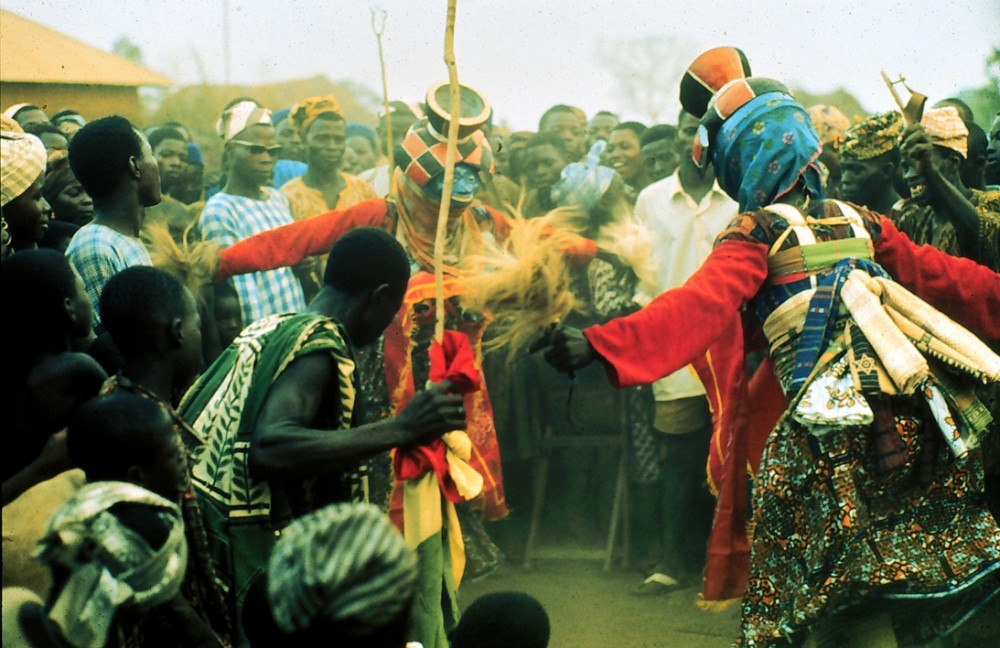 – a performance by the maskers

As dusk approaches after a dazzling array of masqueraders imaging countless aspects of Yoruba life and thought, a final masker–one that synthesizes goddess, ancestress, and priestess–appears to conclude and bless the Gelede spectacle.  Her white ensemble glowing in the growing darkness, Iya Odua (Mother Odua) moves with measured stride toward the marketplace accompanied by her priestess, her attire mirroring that of the masker visually to unite spiritual and earthly realms.  Iya Odua’s slow, stately tread conveys her age, wisdom, and sacred power.  Her whiteness symbolizes her cool, covert demeanor and her post-menopausal purity for she is the creative, protective, nurturing mother of the gathered crowd, her offspring.  Iya Odua’s appearance assures the community that the lavish spectacle has pleased and placated her, and that the mothers will use their power and influence for the benefit of all. 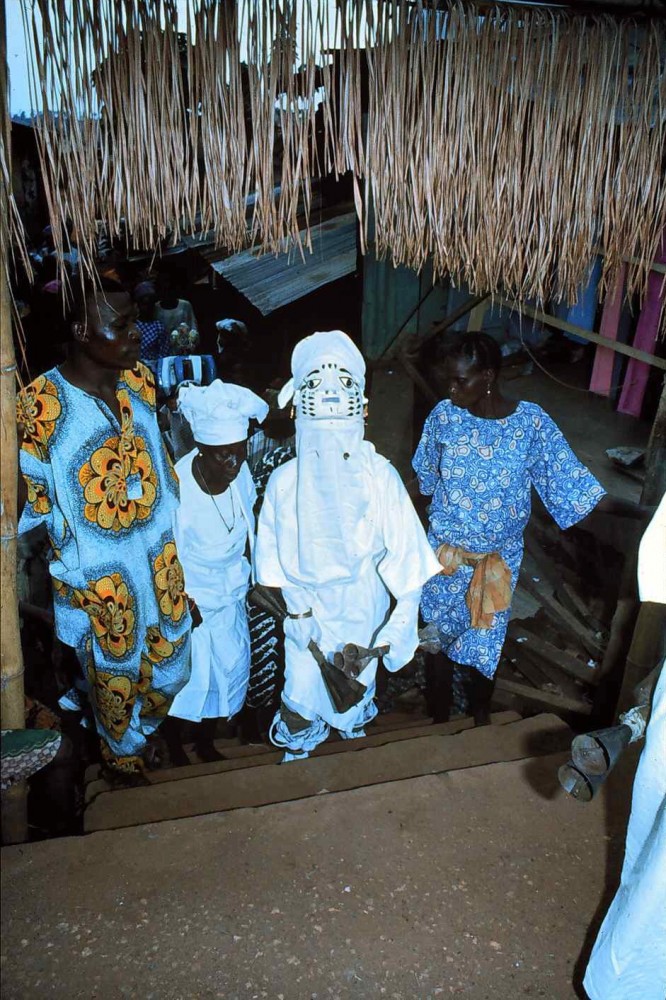 The Significance of the Gelede Masks:

Gelede imagery evokes and comments upon aspects of Yoruba society, praising positive, productive contributions or damning destructive, antisocial ones.  The images in the masks are diverse and encompassing. While the maskers are male, the masks depict both females and males, either generalized or in more specific representations of a wide variety of female and male roles. The Gelede masks are based in a variety of themes. As the Yoruba markets are controlled by women, many Gelede headdresses depict women’s heads carrying the goods they sell in the marketplace. This is done to honour the women’s economic powers and contributions. 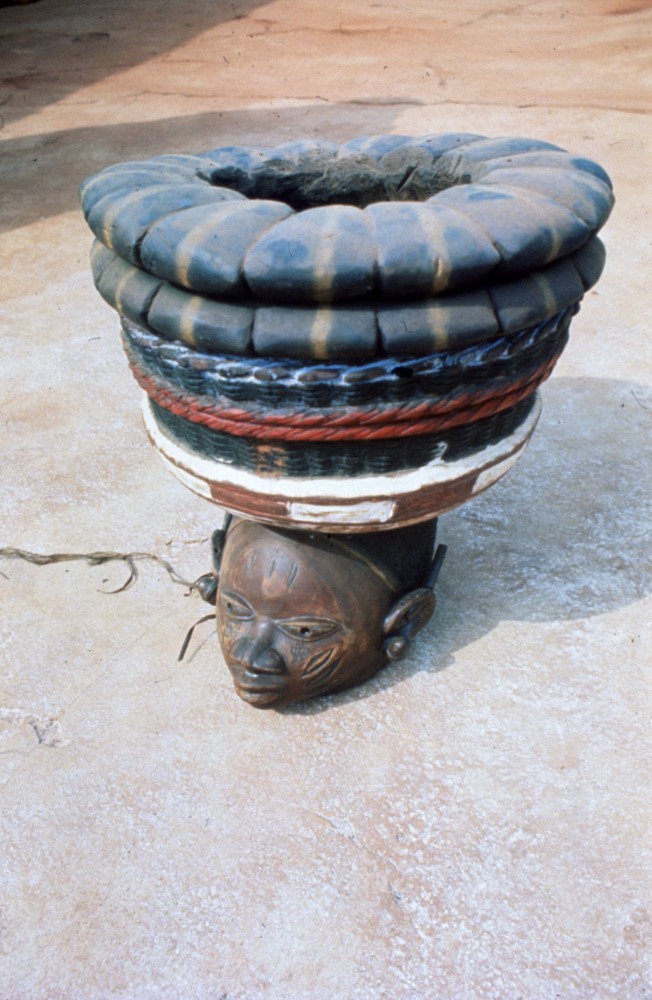 Recognition of male roles is another theme in Gelede headdresses. 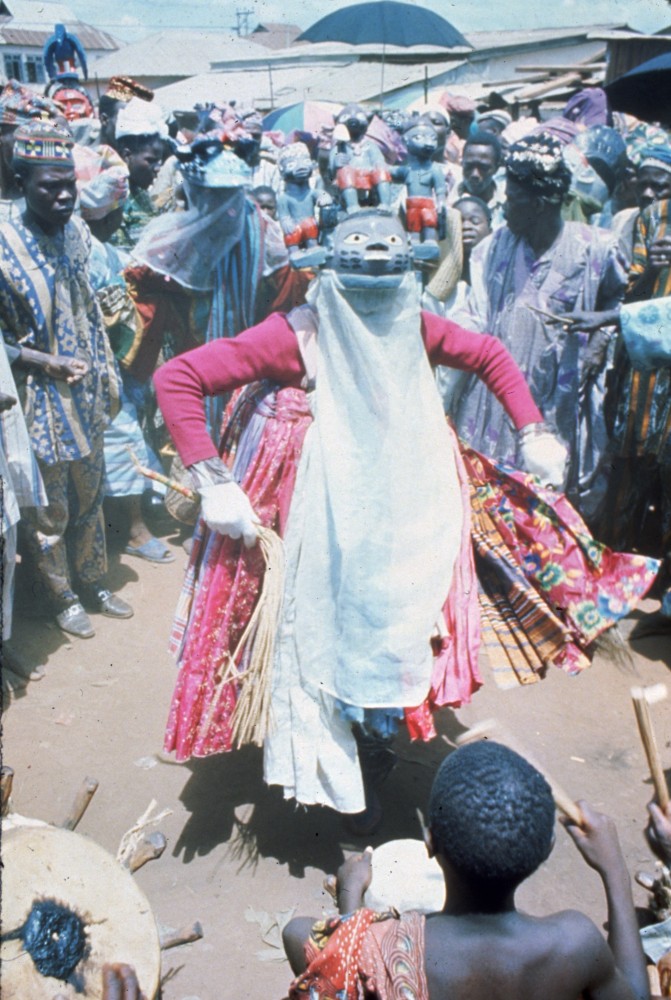 – The superstructure of this mask depicts an important personage seated at the summit, his symbol of authority in his right hand, an elder’s hat on his head, and a beaded necklace around his neck.  He is flanked by two standing attendants, the one on the left dressed in a guard’s uniform.  While celebrating male leadership, the composition visually conveys ideas about balance and stability in the social order.  The most important person is elevated, centered, and seated, while those less important stand on platforms at the sides.  Together these three figures evoke a segment of the social order—an olori (leader or head) supported by otun and osi (right and left-hand assistants).

Many Gelede masks depict animals that serve as metaphors for human actions and attributes as well as illustrations of popular proverbs and songs that often accompany the mask’s appearance. Animals in devouring motifs are an important means of conveying the concept of competing forces in social as well as spiritual realms. Animals in some Gelede masks may be used for satiric purposes to criticize antisocial actions or attributes.  Porcupines, because of their voracious appetites and slow, sluggish movement, are sometimes a metaphor for gluttonous or selfish persons. 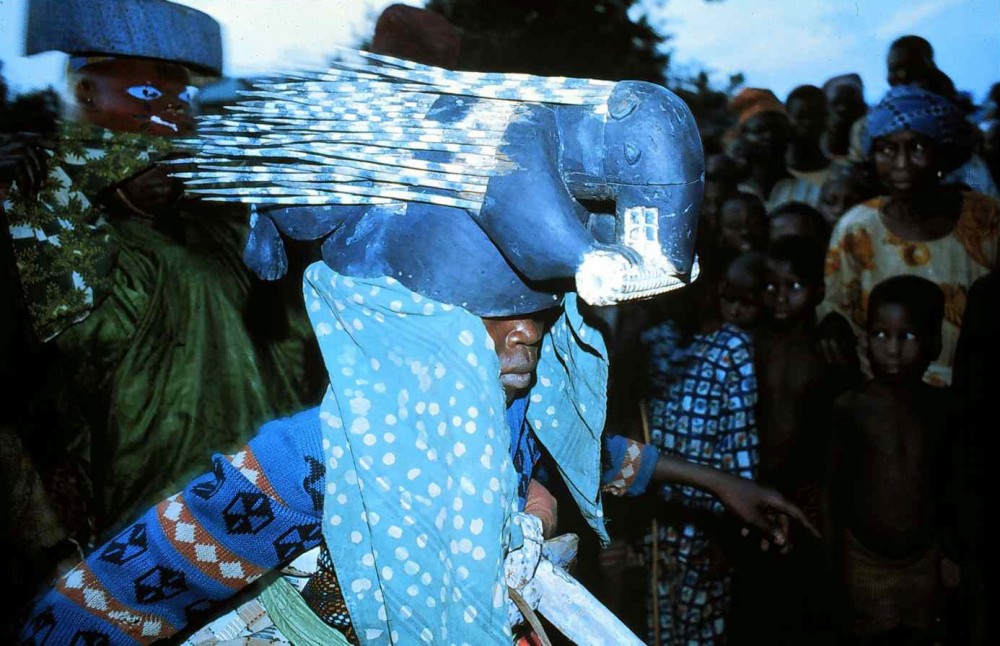 – A headdress depicting a plump porcupine devouring a corncob conveys its greed and thus warns/reminds the audience about proper social behavior.

Images of technology in Gelede masks convey multiple associations. In one sense, they evoke the dynamics of change in society and praise for the positive benefits that can derive from such inventions as sewing machines and cars.  Yet these same inventions can have spiritual connotations as well for they are sometimes seen as resulting from extraordinary powers, like those ascribed to “our mothers”—for whom Gelede is performed.  It is believed that one of “our mothers'” powers is their ability to transform into birds and other flying creatures who can travel great distances with ease.  Thus the striking image of a biplane flying over the head of the Gelede masker depicted below evokes the transformative powers of “our mothers,” encouraging them to use such powers for the progress and benefit of society. 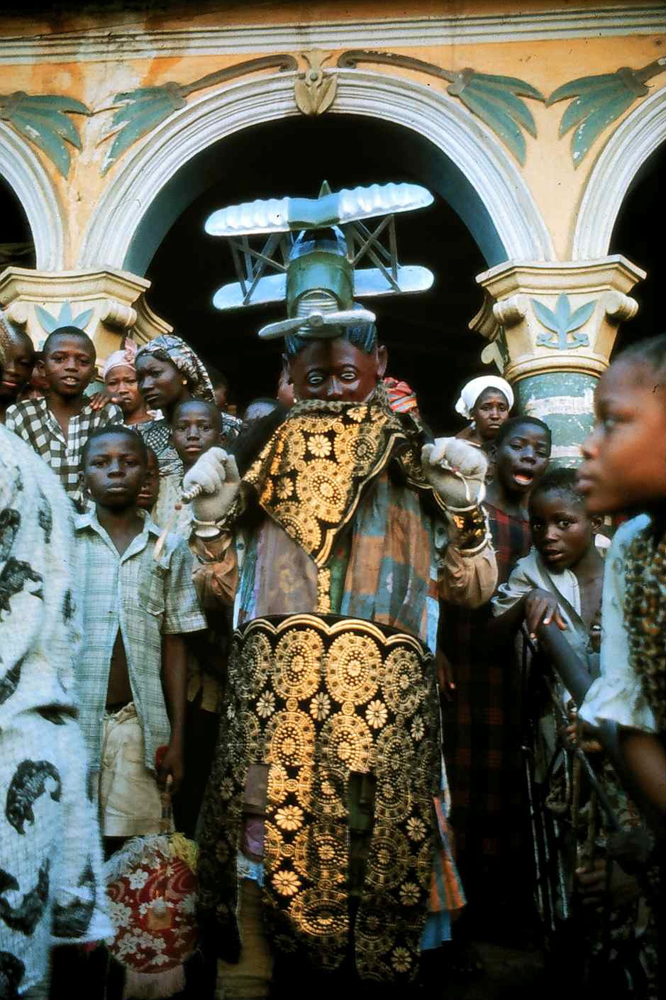 – a Gelede masker depicting a biplane

Thus the Gelede tradition of the Yoruba people is one of its kind in the entire world. It is representative of the rich heritage, social complexity and ritualistic beliefs of the people of this linguistic group. The cultural vibrancy of this tradition is so rich that it makes us believe in the popular Yoruba saying proclaims, oju to ba ri Gelede ti de opin iran or The eyes that have seen Gelede, have seen the ultimate spectacle!