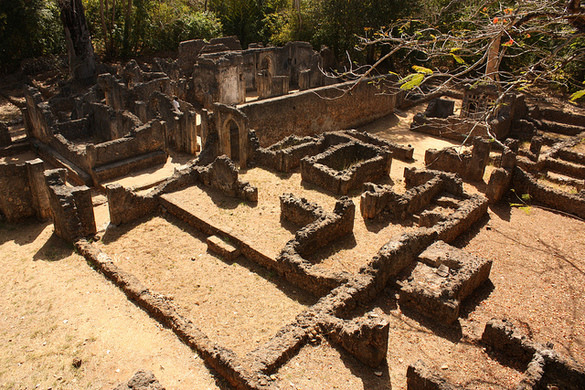 Set in an enchanting location next to the Indian Ocean, is the remains of the historical town known of Gedi.  The ruins were discovered by British settlers clearing forest in the early 20th century, and progressively the remains of a large, well-established town were uncovered. According to archeologists, this medieval Swahili town is thought to have been founded in the early 13th century. Considering its age, what is left of the city is pretty spectacular. From what is left, the town seemed to be very developed, to a level that can be compared to historical towns such as the Machu Pichu in Peru.  The material used to construct the buildings in Gedi was made from coral reef from the nearby ocean mixed with earth and plaster, some with designs inscribed. This style is classified as: Swahili architecture. Gedi was a very advanced city with an impressive grand mosque, a palace for the sultan, large coral-brick houses, well organized streets, halls, meeting places, running water, advanced drainage and plumbing, bathtubs and even flushing toilets!

The remains of this historical town go a long way to correct misconceptions that Africa was uncivilized before European colonization. Gedi was a cosmopolitan town in the Kenyan coast and interesting artifacts have been recovered from the site. Coins and Ming vases from China; glass and beads from Venice; an iron lamp from India; and scissors from Spain, have been found indicating that the Muslim inhabitants of this sophisticated town traded with merchants from all over the world.

The mystery about Gedi is that no one up to now can explain how or why it was abandoned. Regardless of all the conflicting theories, one thing is clear, the nobles did not flee; they had time to empty their gold and precious stones in their secret vaults since none of this type of wealth has ever been found.

Unlike other well-known Swahili towns such as Lamu, Mombasa or Zanzibar, almost no historical record was made of this enigmatic forest civilization, nor was it marked on maps from that period. This makes this ‘haunting beauty’ even more intriguing.  The reason for the secrecy surrounding the existence of Gedi is unknown, and the cause of its downfall also remains a great historical mystery.

The once beautiful metropolis has since been encroached by forests. The site is inhabited by guenon monkeys, which frequently interact with visitors. The historical monument is now protected as a national park and is under the care of the National Museums of Kenya. Gedi remains one of the most highly studied relics on the Kenyan coast.  In addition to being a very important archaeological site; Gedi indigenous forest also serves as a sacred site for traditional rituals and sacrifices for the surrounding community. According to local tradition, the ruins are protected by the spirits of its priests which supposedly curse anyone who harms the site or removes anything.

Baklava: A Crisp Sojourn of the Middle East