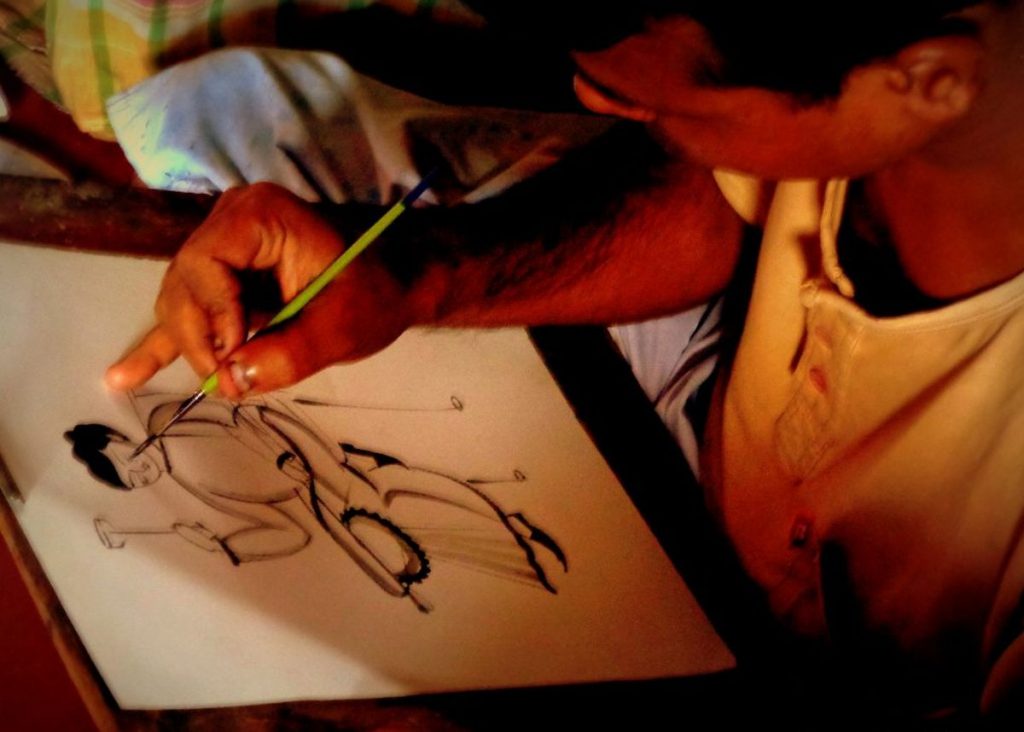 Characterized by fluid curves and flat bright colours, Kalighat painting occupies an important place in the history of Indian art. It was the urban and reformed version of the Midnapore school of Patachitra, a scroll painting tradition of Bengal.  Liberating itself from the confines of religious narratives, it went on to comment on the contemporary socio-political phenomena. The rustic folk simplicity was replaced by the emerging complexities of city life.

In the early 19th Century, rural patuas (the community of Patachitra painters traditionally carried the surnames ‘Patua’ and ‘Chitrakar’) from Midnapore migrated and settled around the Kalighat temple, on the banks of Adi Ganga. Kalighat being a major pilgrimage center attracted thousands of devotees round the year.

The devotees wanted to carry something as souvenirs on their way back from this sacred place, and the locally available, cheap paper painting was the only affordable option. In the memoirs and travelogues of the European travelers, these paintings have been called ‘Bazaar paintings,’ a description that carries a sense of inferiority when compared with the Occidental standards of art.

This is primarily because the painters lacked the sense of perspective, and the linear rhythm of human figures miserably failed to impress the lovers of realism. Kalighat painters faced draconian competition from the ever-expanding market of lithographs and cheap oleographs and gradually disappeared by the 1930s.

The medium of scroll painting has a vibrant history in this part of the continent. In an age when the society and economy were primarily agrarian, bards toured from village to village with their painted scrolls, unfolding the world of Puranic epics and folk myths to the curious audience.

These demonstrations were accompanied by narrative songs. The Cherial paintings of Andhra Pradesh, Phad paintings of Rajasthan, and Patachitras of Bengal and Orissa are part of this vivid and arresting storytelling tradition. Patuas of Midnapore used scrolls known as ‘jorano pat,’ which were executed on cloth and could be rolled easily.

There were divisions within the patua community on the basis of the duration of tours. The ‘Duari patuas’ travelled from door to door throughout the day in nearby villages and returned home by night. The ‘Doori patuas’ travelled long distances, exhibiting their works and narrating stories.  The themes were from folk literature. Episodes from the ‘Mangal kavyas,’ creation myths, magic and cult-rituals, agrarian lives, pantheistic practices such as ‘pahar puja,’ and Hindu epics were painted and sung.

From Midnapore to the Mecca of arts

Initially, the Kalighat school produced images of Hindu Gods and Goddesses, keeping in mind the target audience. The rolling scrolls were replaced by rectangular sheets. Cheap mill made paper was used for painting, but the painters retained the tradition of using natural colours.

The outlines were painted in black using lampblack, which was later filled in with bright flat colours. Turmeric was used for yellow, red chilies for red, indigo for blue and so on… The paintings acquired a semi-classical finesse due to the application of colloidal tin for the purpose of depicting jewellery.

Secular themes entered the painters’ world soon and Kalighat school emerged as a satirical genre, highlighting the inherent hypocrisy of the society. Their detailed observation of an evolving social class helped them to produce symbolisms in art, which could be interpreted as important sources of modern Indian history.

The flamboyant Bengali nouveau riche or the urban elite has been the favorite theme of the Kalighat painters for their ostentatious display and extravagant lifestyle. These paintings unveil the pretentious mannerisms of the nouveau riche by the use of subtle metaphors and visual allegories, which have become an integral part of the Kalighat iconography over time.

Kalighat painting is perhaps one of the best primary sources to reconstruct the social history of the19th Century ‘Babu culture’ which flourished in Calcutta. ‘Babu indulging in sensuous pleasures with courtesans’, ‘Babu sitting on a chair and piping the hookah,’ ‘cat with the marks of a saint eating fish,’ ‘horse-race,’ ‘Elokeshi-Mohanto crime case’ were some popular themes.

The painting of a young attractive lady sitting in voluptuous posture with her right hand raised above her head, holding a rose in each hand, titled ‘Golapsundari’ is an evidence of the eternal fact that the essence of Indian aesthetics flows down the ages evermore.

The legendary painter, art critic and scholar, Mukul Dey, who collected some priceless works of the Kalighat school ( a major part of it was acquired by art historian W.G Archer during 1930s, and many of these paintings are exhibited in the Victoria and Albert Museum, London) wrote in 1932 :

These pictures have now entirely vanished. The artist craftsmen are nearly all dead, and their children have taken up other business. In the place of these hand-drawn and hand-painted pictures selling at two or four pice each, garish and evil-smelling lithographs and oleographs – quite appalling in their hideousness – have come. The old art is gone forever – the pictures are now finding their last asylum in museums and art collections as things of beauty which we cannot let die.

One of the last practitioners of this art to have received international recognition and critical acclaim is Kalam Patua. He reinvented the Kalighat style by painting contemporary themes and yet retaining the stylized pattern of the traditional works. His paintings are housed in galleries and museums such as the National Gallery of Modern Art, New Delhi, The Victoria and Albert Museum, London, The Museum of Sacred Art, Belgium, etc..

The alleys and by-lanes of Kalighat buzz with life from the dawn-break. But practically none of the residents and shop-owners are aware of the rich painting tradition which once flourished here. I accidentally met the only custodian of this great tradition, residing in the vicinity of the temple, Bhaskar Chitrakar, who is arduously trying to revive the art form. His unflagging efforts do not seek beneficial opportunities, but the admiration and appreciation of a true ‘rasik’.