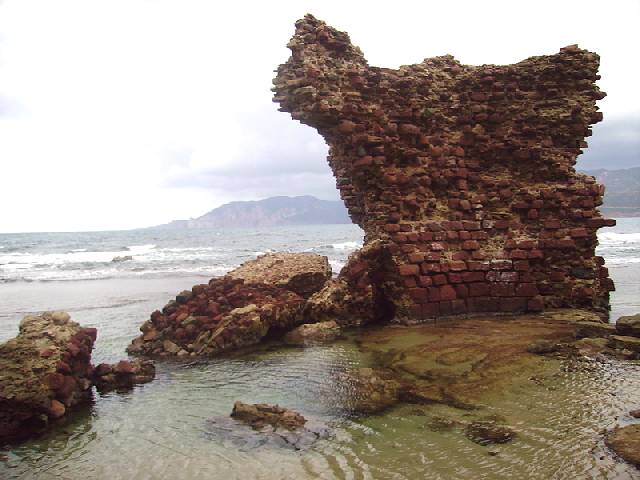 “Tell the towers” also means talking about Tonnare. Sardinia has always been a center of passage for the tuna, and tuna is fished since eons in certain areas of the Mediterranean and the Atlantic. The nets used to catch the tuna, consists of an underwater cage called tonnara or mandraga which was used by the ancient Greeks of Massalia (today Marseille) and Antibes and this practice subsequently spread in the major islands of the Mediterranean.

The Romans and later the Arabs perfected the ancient art of fishing.

In Sardinia, tuna fishing dates back to the late 16th century. The merchant of Cagliari, Pietro Porta, was returning to Sardania from a trip to Spain,  and he observed a school (a group of tuna fish) in the territory of Portoscuso. He studied new fishing equipment that could be used to trap large quantities of tuna in the territory. He sought qualified workers in Sicily and in other areas of the Mediterranean, to bring in the island. He informed governmental authorities of his discovery. The King of Spain, Philip II, was interested in the project of the Porta and with the approval of the Council of the Crown, he lowered the nets along the northern coast of Sardinia, and along the western coast: one in Portoscuso (anciently called in Castilian

The King of Spain, Philip II, was interested in the project of the Porta and with the approval of the Council of the Crown, he lowered the nets along the northern coast of Sardinia, and along the western coast: one in Portoscuso (anciently called in Castilian Porto Escuso), one in Porto Paglia (also called Porto Palla, The Middle Beach or Portu Palla) and the third in port Caterina di Pittinurri. The oldest documented evidence on the Tonnara of Porto Paglia in Gonnesa, dates back to 1592 or 1594.

It was one of the most economically important industry of the Low Sulcis Iglesiente and this activity created employment opportunities and livelihood. It was an incentive for commercial development and between the 17th and 18th centuries, attracted investments of the colonists. Porto Paglia also had accommodations for the crew in the hill near the Tonnara and the tuna was brought and worked in the establishments of the Punta in Carloforte.

During the Byzantine period, at the beginning of the Christian era, starting from the 710, many castles and towers were built to guard the Sardinian coast threatened by the incursions of the Arabs. This, however, did not prevent the coastal cities from being attacked and robbed for almost two centuries and abandoned by its inhabitants. We must have made a quantum leap forward to 1479, when Sardinia became a State of the Crown of Spain because of the marriage between Ferdinand II of Aragon and Isabella of Castile. Thanks to these two Catholic monarchs that invested in the construction of the coastal towers manned by soldiers on foot or on horseback who built fortifications equipped with artillery to counteract the Turkish-Barbary fleet. Some historians argue that the towers were placed in strategic positions such that they could see each other and communicate during Barbary pirate raids.

The presence of the coastal towers guaranteed the safety of the fishing activity and these structures assured the defense of Sardinian coasts. The guards warned the inhabitants of the coastal villages of approaching  pirates and enemy invasions by major powers such as France. The nature of the coast suggested the location and type of tower that would have been created. The towers usually were built on promontories that allowed to have maximum visibility on the sea and to communicate with other defense towers placed along the coast. For their construction, stones of excellent technical characteristics were used. Many Sardinian towers, still today, are in good condition and are being used. In some cases, however, the site that proved inconvenient is the Porto Paglia tower. It was built on the rocky coast and was subjected to the aggressive action of the atmospheric agents and of the sea. The use of the porous tuffs for the construction has led to its partial collapse.

In the Gulf of Gonnesa, historical documents show two towers.

The Tower of Porto Paglia is located in the Gulf of Gonnesa (Porto Paglia beach) at about 3 kilometers from the village. There are two dates of probable construction of the tower. According to military engineer and architect Rocco Cappellino, it was built in 1577, according to Charter of Francesco Vico in 1639. It was built to defend Tonnara, the ancient village of fishermen, that after a phase of restoration and recovery on the initiative of the municipality of Gonnesa and the Superintendent (SBEAP), serve as holiday homes. The tower was built at sea level – not a dominant position -and this particular characteristic makes it quite unique. You can access the tower from inside because a portion of the wall has collapsed. The shape is a semicircular, a sort of half-moon, built with hewn stones in volcanic tuffs.. The part of the tower that is directed toward the northwest, has a spur that probably serves to break up the waves of the sea.

The tower is located a few dozen meters from the cliff and therefore, appears difficult to access. You can reach either by boat or from the Fontanamare beach (which is also part of the Gulf of Gonnesa) walking along the sandy stretch or , starting from SS 126 after the village of Gonnesa, you can reach the ancient Tonnara  and the Village of fishermen of Porto Paglia.

Due to prolonged and unacceptable disinterest and the incompetence of the municipal institutions in the village of Gonnesa, it has now in shambles. From its location, you can see the Cala Domestica tower that belongs to the municipality of Bugerru. In the locality of Fontanamare, there was perhaps another tower that, according to the report of Cossu, was built in 1799. There is currently no trace of the tower which was located on the hills near Fontanamare as it was destroyed. The only reference that we have is the hill called “Guardia Manna” (translated from the Sardinian “Great Guard”) next to Fontanamare. Cossu asserted that the tower communicated the signals to Portuscuso but in light of the concrete evidence, everything suggests that this was a “dead guard” and not a tower.

Separated by Boundaries, Bonded by Wood: Comparing Vernacular Architecture of Belarus and India