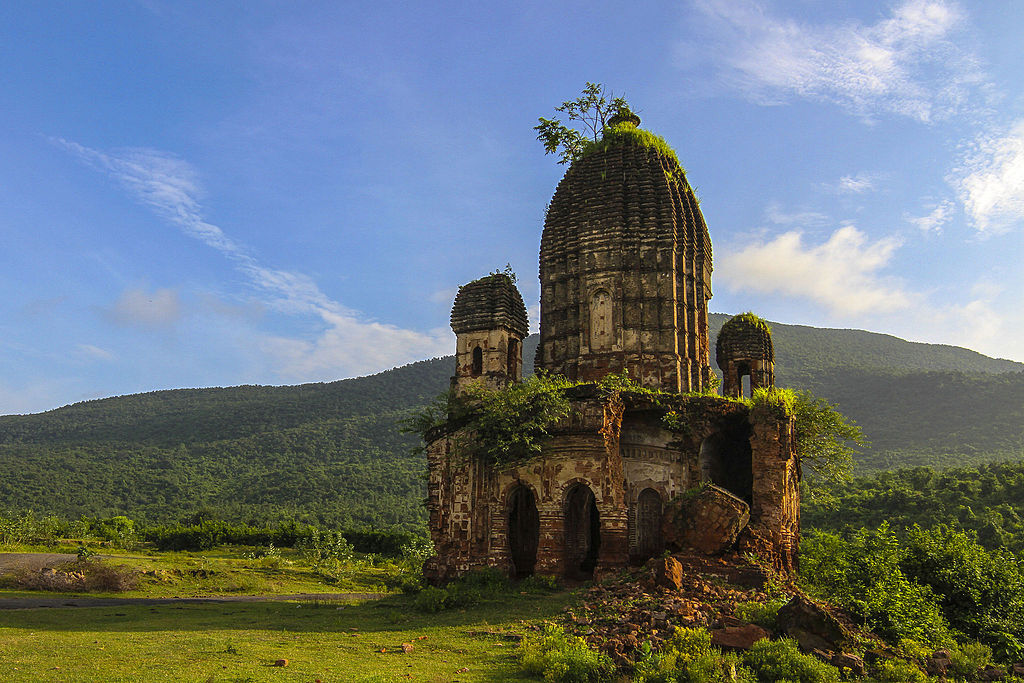 Purulia in West Bengal, India is largely avoided by the tourists because of its recent tryst with the Maoists. Beyond this recent image lies a beautiful land packed with remains of its rich cultural and religious past, often related to the thriving Jain culture of the region during 9th and 11th CE. Behind this cultural efflorescence lay the patronage of the Panchakot Raj. This royal family, which still survives and carries forward its royal lineage and public recognition from Kashipur Rajbari in Purulia, had established a mighty capital and fortress in the lap of Panchet Hills. The family ruled from this capital, known as Garh Panchakot, uninterrupted for 810 years, from 940-1750 C.E.

What comes down to us as the history of the Panchakot Raj is actually a blend of legend and actual history. According to the legends, while Raja Jagat Deo was going for pilgrimage in Puri from his kingdom in Dhar in modern Madhya Pradesh, his wife gave birth to a son while camping at Jhalda, currently in Purulia district. The king’s entourage believed the child had been born dead, and left him there. Later the child was found by seven local tribal chiefs and was named Damodar Sekhar. It was Damodar Sekhar who established the Panchkot Royal dynasty in 80 CE. The capital was shifted to Garh Panchkot much later in 940 CE. Garh Panchkot was abandoned in the 1750s, because of Maratha–Bargi raids and internecine wars. At this point, what survived of the royal family moved to Kashipur on the banks of Dwarakeshwar river, 30 km south.

IMPRESSIONS FROM OUR LATEST VISIT

I visited Garh Panchakot twice. First in June 2011 as a part of a survey of heritage sites in South Bengal commissioned by the West Bengal Heritage Commission and a second time with my wife in 2015. While walking through this landscape, which is very rich in archaeological remains such as dilapidated temples, ruins of palaces, a large number of tanks, and even remains of past causeways (leading up to the watch towers and remains of fortifications and temples on the top of the Panchet hill), I immediately realized the archaeological importance of this site, which unfortunately, lacked any proper systematic survey till date.

The name Garh Panchakot refers to the five concentric fortification walls that once defended habitation core of the capital . J D Beglar, during his late nineteenth century reconnaissance of vestiges of this part of India, had recorded the presence of five gateways that might have served the entry points of the five fortification walls.

The core area of the site, which can be termed as the “Royal Center” is full of temples and ruins of a palace popularly known as the Rani Mahal or the Queens’ Chamber. This core is cached in a safe crescent shaped bend in the south-eastern valley of the Panchet hill, which gives it natural protection from the north and north-west, and partially on the north-east. Beyond the hill, further north lay the Damodar river, which presently flows into the Panchet Dam (estd. 1959) to the west of the Panchet hill. This 2.5 kilometer core area, also includes a great number of man made, rectangular tanks, surrounded by modern agriculture. Traces of an old road that led to the sites can also be traced with a trained eye. We have identified at least one archway beside one such tank, which probably led to an old ghat.

As an archaeologist interested in old landscape and remote-sensing, I had to look at the landscape through satellite imagery, which I did through GoogleEarth. In a trained eye, the archaeological potential of the site became even more clear. The current village of Garh Panchakot, and the surrounding cultivation inside this core area is comparatively recent. A closer look at the satellite image was more rewarding in the terms that some traces of old fortifications could still be made out. As it is shown in the picture, three successive fortifications could be identified (yellow lines) with probable enhancements. However, this identification is entirely based on the satellite image and needs to be corroborated with the field survey data. The landscape is also crisscrossed with numerous seasonal streams, some of which could have been the remains of old irrigation channels used for agriculture in the hinterlands of the core area. However, this prospect requires more intensive reconnaissance survey in the area.

A survey in the adjacent landscape outside the fortification wall is also required to form a proper understanding of the nature of habitation and identify the satellite settlements which might have formed a part of the site catchment area. If properly surveyed and later followed up with excavation and proper conservation of the landscape and the environment along with already ailing temple structures, the site might be at par with world heritage sites, and attract a good amount of tourism and generate good revenues, besides being highly important from an academic point of view.

During the 2015 visit, I was alarmed to see that a tourist resort was coming up within the core area of Garh Panchakot, very close to the dilapidated temples, palace at the foot of the Panchet Hill. While it is a good initiative to promote tourism in this very important archaeological site in Bengal, developing tourist facilities so close to these fragile structures, is counterproductive. The drilling and blasting required is already causing damage to the structures, and there is a high potential of unnecessary pollution in the core area once this resort is open for business. I would request the stakeholders to reconsider and move the development outside this core area to facilitate archaeological research and conservation.

Traditional Industries : The Legacy of a Family Business in Jhansi