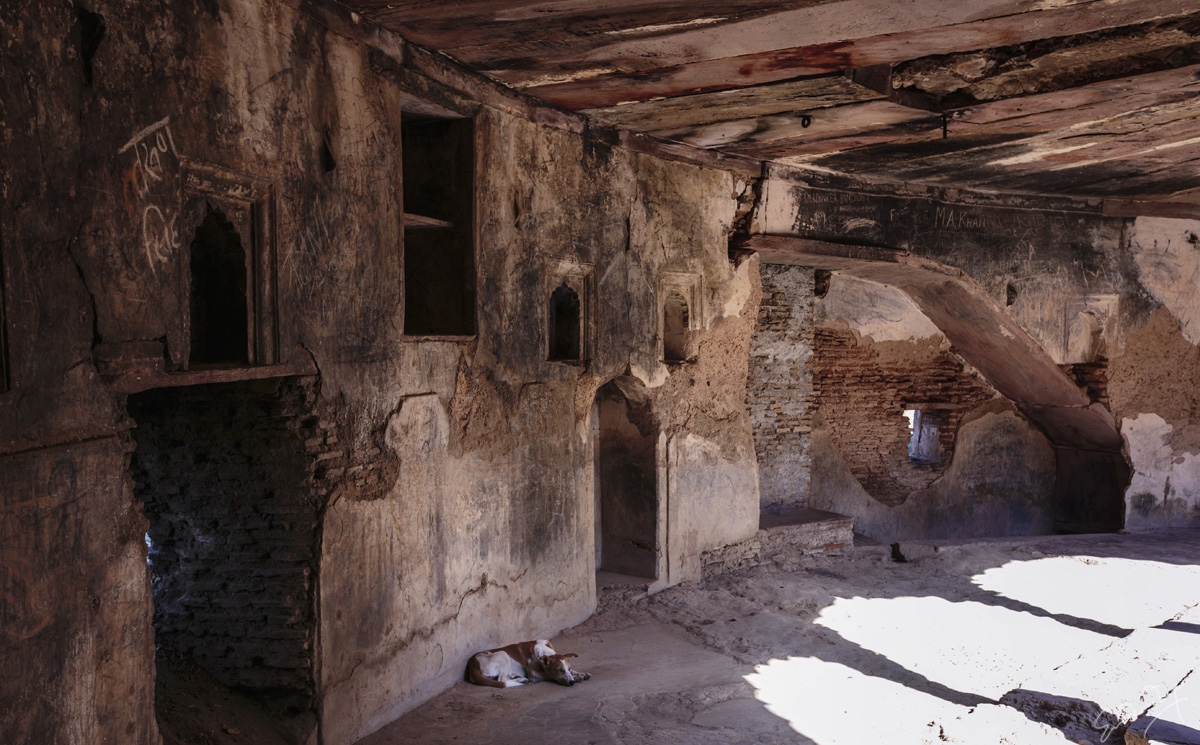 Chitrakoot and its surroundings are steeped in religious and mythological anecdotes. This is the place where Lord Rama spent eleven out of his fourteen years of exile. Amidst old, new, big, small temples and other places of religious importance, about eleven kilometers from Karwi, a bit away from the main road, lies Ganesh Bagh, a page from history, a witness to Peshwas ties with Bundelkhand region. It is said to have been built in 1880s.
Ganesh Bagh was perhaps created as a recreational retreat.

The premises  has an ornately carved Shiva temple with various unique features. These include a seven storeyed step well, a big pond with steps and cenotaphs around it, few more smaller enclosures, a palace, remains of few other buildings and wide open space which is now being converted into lawns and gardens.

When the Peshwa king Vinayak Rao chose this secluded place to build his resting retreat its location was perhaps the deciding factor. Even today, the quiet serenity of the place has a balmy impact on the tired mind and nerves. The mighty Vindhya range stands  as a backdrop. All around Ganesh Bagh are fields, trees and far flung villages with few mud houses. The pastoral beauty is soothing.

The seven storey step well or Baoli is the first structure one can see after entering the gate. We wandered around in the colonnaded arcades and passages of it’s top-most story only. However, we could see two more stories below that. These were out of water level. One more story ,submerged in water too was visible. However the stories below that could not be seen. There was a narrow  canal like opening through which deep down, water could be seen in a long stretch.

In between, at regular distances, horizontal platforms connected verandahs of both the sides. On the farthest end was a huge circular well-like structure. This too, had water in it. The well had a circular, covered verandah around it. Remnants of a water drainage system could be seen in this verandah. Perhaps the area was used by noblewomen for bathing.

On one side a small door opened to the open space on other side of wall of step well. A lone mango tree stood in the open space. The step well, it’s structure, design and continuous presence of water all together form an amazing cooling system to beat the scorching heat of Bundelkhand. The step well is an amazing feat of engineering in perfect synchronisation with nature. At that time, society catered to all the comforts, luxuries and needs of people but always maintained an ecological balance. Nature was given an important place in the scheme of things. And here are we, creating havoc in the name of development.

The Shiva temple stands on a raised platform. At one end of this covered colonnaded verandah are three chambers with stone door frames which are adorned beautifully carved images of various Gods and Goddesses. On some of these images sea blue, pink, maroon colours still can be seen. None of these three chambers has any deity in the sanctum. No worship or daily rituals are performed here, but local people throng the temple during Shravan and on the occasion of Shivratri.

The floor of the verandah running in front of these chambers is very interesting. Two games, chaupar and ludo were engraved on the floor. The Verandahs I have seen in front of temples feature devotees chanting, singing bhajans and offering prayers. Indoor games are a surprising addition! On the other end of verandah, staircases from both the sides lead to the roof top. A f few feet ahead the verandah lies an oval small pond shaped structure.

Another beauty of Ganesh bagh is the big pond near the temple. steps from all the four sides lead to water . The pond is square in shape. Few cenotaphs around the pond were still intact, though indications were apparent that there were more such structures around the pond.

Ganesh Bagh is an ASI protected monument. The premises are neat, clean. Whatever structures have survived the passage of time have been well maintained. If you love solitude, history, architecture and nature, you should not miss out on Ganesh Bagh , more so if you happen to be in the vicinity.

September-October or January-February is the best time as the natural, pastoral beauty is at its best during those months.
Ganesh Bagh should be visited during the day time only. It is more convient to have one’s own vehicle. However from Chitrakoot or Karvi you can hire transport as well!

The Himalayas: A trove of minerals, flora, fauna and culture