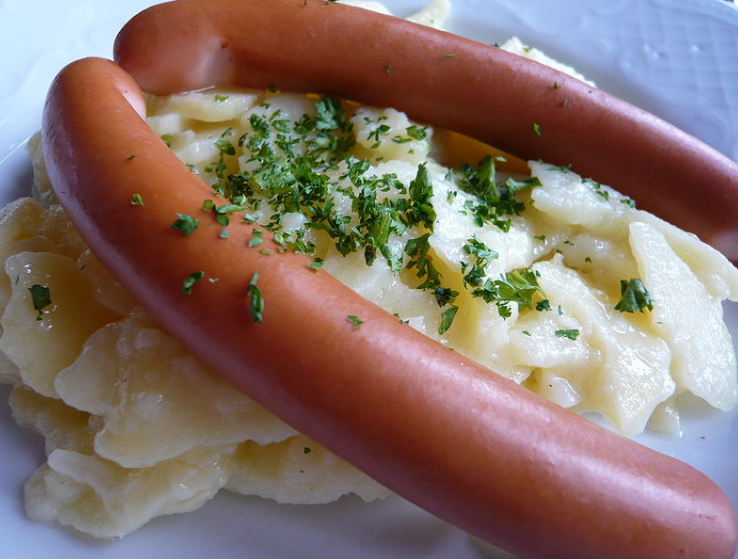 Next to beer, the Sausage is the most famous trademark of German food culture. Every kind of sausage has its own composition and tradition. Probably the most famous sausage is the Bavarian veal sausage, the Weißwurst. Even though it is made from veal there is pork backfat added. Did you know that, if you want to eat a Weißwurst the proper way, you have to eat it before noon? Why is that? Well history tells us about a time without refrigerators. The Weißwurst was not “cured” meaning made with nitride like other sausages but with usual salt. (That is why it stays white). That means it debauched much faster. But I would say it does not count as a Pork dish. Then there is the Frankfurter, the Nürnberger, the Regensburger, the fränkische Bratwurst, the Teewurst just to give a hint of the complexity of the German “sausage-map”.  It indeed is a cultural heritage of Germany. It counted as a privilege of the free cities of Germany to have their own sausage with the cities name.

Without further ado I will come to the point. I already mentioned the Frankfurter. They count as a real pork dish I would say. They do not fall behind the Weißwurst in terms of world fame and they have an interesting story to. For hundreds of years it served as an Emperors dish in the cathedral of Frankfurt, which also used to be the coronation church for the Roman Emperor. For the celebrations after the coronation they used to butcher an ox. After they fleeced the ox it was filled with the fine sausages made out of chopped pork. Those sausages were really expensive and showed the luxury in that big event.

In the 19th century the Frankfurter pork sausage lost in popularity. The beef sausage was about to outdo the Frankfurter because at that time there was a big community of Jewish people. They were not allowed to eat pork so they used beef, but it was way harder to process. A mix of pork and beef was not possible until 1864 because of a law that prohibited any mixture of meat in sausages. Then the freedom of trade was established and they started to mix. Until then the Frankfurter was definitely just pork.

But what about today? More and more people in Germany and central Europe are choosing a vegetarian lifestyle. The Newspaper “Die WELT” writes, that even though pork is very popular in Western Europe, it has trouble reputation wise. There are still the religious reasons to not consume pork but also some very important others. There is a rising awareness of animal rights. The meat production became industrialised and experts say, that the Germans do indeed consume too much meat to be healthy.

The Green-Party in Germany furthermore tries to raise awareness on the ecological problems caused by the meat industry.  Four fifth of the global agriculture is nowadays used for livestock farming. In the EU about 60% of all grain production goes into animal feedings for the meat farming.

On the one hand that movement hurts the farmers, on the other hand it raises a certain awareness of sensible consumption. To be honest I personally stopped to eat meat for those reasons and others, but that does not mean I cannot admire the fantastic development, history and heritage of the Frankfurter. It has a long history and I do not think there is reason to worry, in 2013 the average German ate 60kg of meat, 38.1 kg of that was Pork. From Emperor to Chancellor, Pork is still the secret champion.