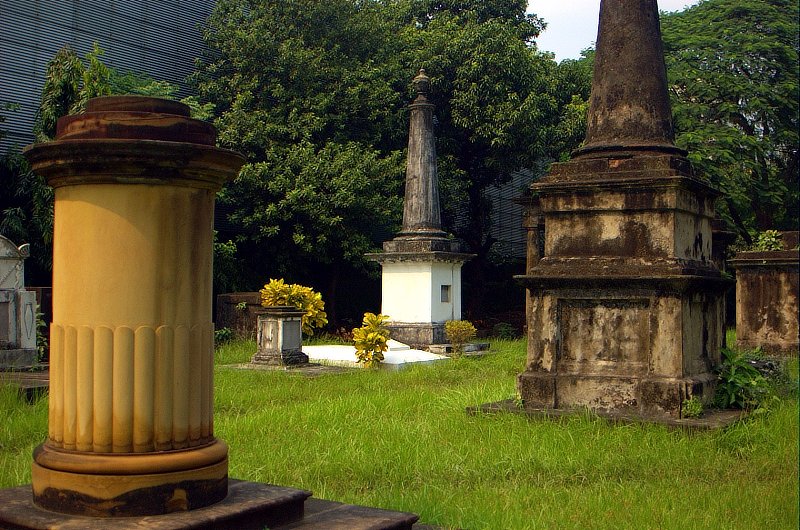 “The world slides, the world goes, and death makes equal the rich and the poor.”

How could a place be so full and empty at the same time? All around are the crumbling graves with cracked tombstones, faded with time, surrounded by yellow moss and falling leaves, somehow surviving in an eerie silence.

The South Park Street Cemetery in Kolkata is a concentration of the who’s who of British Raj. Many mighty ones found their last resting place here—surrounded by a twenty foot high mossy stone wall enclosure—in one of the oldest cemeteries of India. Park Street is one of the busiest streets in Kolkata’s heart, but inside of the cemetery is peaceful, dark and uncharacteristically cool for Kolkata, and disconnected from the hustle and bustle outside the high wall.

The South Park Street Cemetery was built in 1767 for the early East India Company pioneers and their attendants. Today it looks really old, colonial and mysterious. Earliest grave here dates to 1768 and the last ones to 1895. Filled with colonial graves in the shape of massive pyramids, pavilions, obelisks and urns and each of them hid in themselves real history. Famous luminaries like Henry Louis Vivian Derozio, Sir William Jones (founder of the Royal Asiatic Society of Bengal), Richmond Thackery, Colonel Vansittart, Col. Akilis, Michael Madhusudhan Dutta, and few others are resting in eternity here.

The graves, covered with heavy moss, seemed to whisper to the passers-by that no matter how hard one tries, from dust he has come and one day, to dust he shall return.

One of the most elaborate structures here is the grave of Major General ‘Hindoo’ Stuart. His real name was Charles Stuart and he was in the East India Company Army. He embraced Hindu culture and advocated strongly about it. On his grave, a small mausoleum was built in the shape of a Hindu temple.

The South Park Street Cemetery, Kolkata is an open air history book for one to read and touch. Today, the cemetery is in quite depilated shape. Several attempts, to restore it have been made, but the demise of senior committee members and severe lack of funds are main causes to hamper the same. The cemetery is thus a monument of double death—the decaying remains of its inhabitants, and its own death, as it lies forgotten by both, the present and the past—who cares for the dead, when no one has time for the living one. Though the tombs are numbered and a list of persons buried is also available with the management committee, but finding a particular grave is not easy, as -the graves are not placed in the order of their numbers.

Rudyard Kipling sarcastically (and probably very correctly) wrote about this historic cemetery, ‘‘the tombs are small houses. It is as though we walked down the streets of a town, so tall are they and so closely do they stand—a town shriveled by fire, and scarred by frost and siege. Men must have been afraid of their friends rising up before the due time that they weighted them with such cruel mounds of masonry.’’

The Cemetery is known for its ghostly atmosphere and Sandip Roy filmed his ‘Gorosthane Sabdhan’ in its haunting environs. The movie was based on his father Satyajit Roy’s short novel of same name.

Today, not many visit the old, almost forgotten cemetery and it’s difficult to recognize from outside. Walking through the brick- pathways of the cemetery was a humbling, ego-shattering, experience. It had an old unknown feel to it. Crumbling tombs and broken obelisks reminds us of the mortality of human beings.

As we were walking out of the cemetery, we found a tombstone, “In the midst of life, we are in death.”

The grave of Henry Louis Vivian Derozio (1809-1831) : Assistant Headmaster of Hindu College, Kolkata, a radical thinker and one of the first Indian educators The grave of Major General Charles ‘Hindoo’ Stuart (1758–1828): The small mausoleum ob his grave styled as a Hindu temple

The grave of Major General Charles ‘Hindoo’ Stuart (1758–1828): The small mausoleum ob his grave styled as a Hindu temple The grave of Henry Louis Vivian Derozio (1809-1831) : Assistant Headmaster of Hindu College, Kolkata, a radical thinker and one of the first Indian educators

Tracing the legacy of Biryani: The royal delicacy

Kolkata – the city that lives with its past