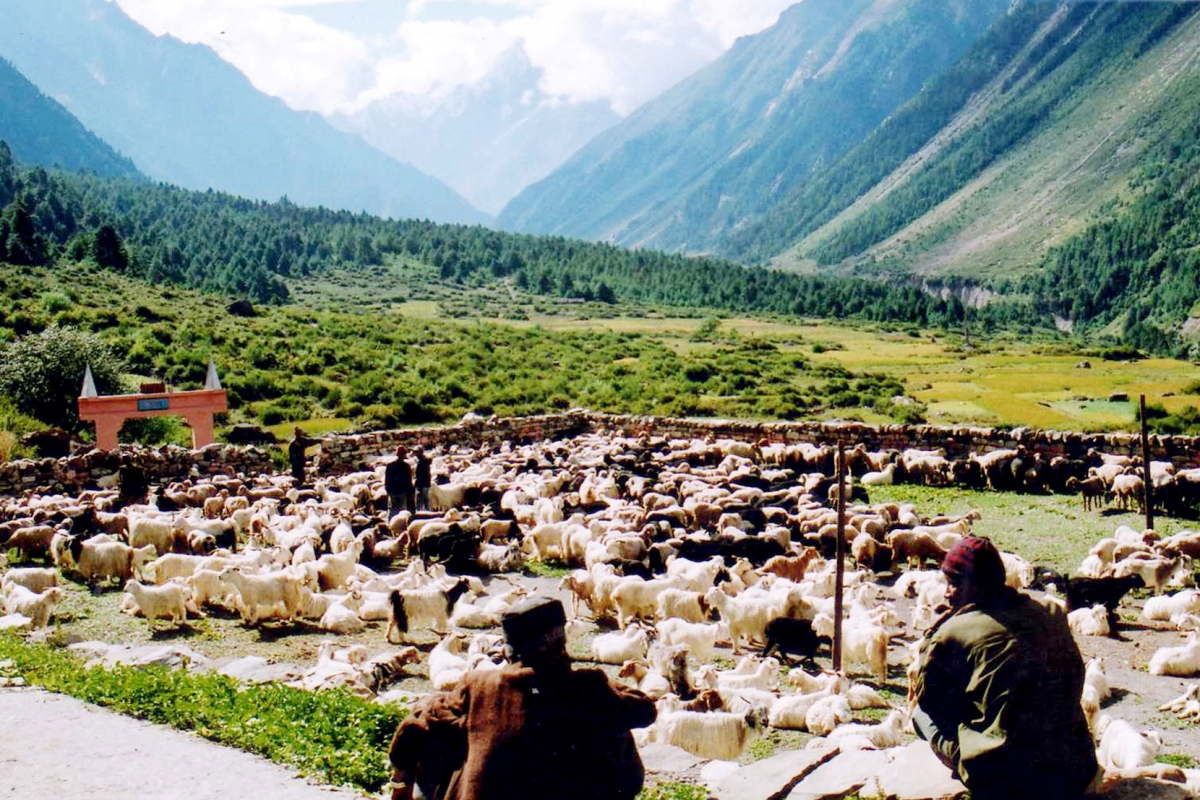 This article is written by Srishti Lakhera. It was originally published on www.sahapedia.org an open online resource on the arts, cultures and heritage of India.

Pithoragargh district of Uttarakhand is home to ancient communities of the Himalayas. One of them, the Bhotia, is a border community that resides in high mountainous regions in the range of 1500-6000 feet. Trade has been the mainstay of the Bhotia economy. They indulged in the trans-Himalayan trade but after the occupation of Tibet by China this trade came to an end. However, their trade relations with Nepal still continue. Ingredients exported were food grain, sugar, gur (jaggery), spices, tobacco, cotton, cloths, corals, beads etc. and items imported were borax, salt, wool. Bhotia had to resort to seasonal nomadism owing to the travel they undertook for trade. Thus, Bhotia families have two settlements—the upper regions are occupied in summers (May-June to October-November) where they stay to trade and cultivate grains like palti (buckwheat), phaphar, naphal (hill wheat). The lower region settlements or winter settlement are where they stay for the rest of the year. Here they cultivate wheat, paddy, maize, jowar, potato etc. Bhotia men migrating with cattle to the lower settlements in Kuncha

As the Bhotia community is seasonally nomadic, storing dehydrated or sun-dried food for the winter is a common practice. They dry vegetables like onion, radish, herbs, spices and meat. Lafhoo’ is a popular preparation of radish, made by grating and then sun-drying it. The sun-dried grated radish is then prepared into a stew (jholi) and served with rice. Thawe (kala jeera or caraway seeds): A spice which grows wild. It is commonly used in dal and chilli chutney. It has many health benefits as it is high in minerals like iron, copper, calcium, potassium, manganese and selenium. Kwacho (Sakwa): another wild herb, which grows abundantly in the lands of Bhotia. This is also used in dal and with fried vegetables. Jadibuti (natural herbs with medicinal properties) is popularly consumed in every Bhotia household. Katki is used to cure fever. Chibi is prepared with rajma dal and helps to cure indigestion. Ina (Timurga) is prepared with chillies and helps cure cough and cold. Bu’ (Yarchagbhu) is a herb which grows wild and is still harvested by the community to trade with Nepal and eventually sold in the Chinese market at a very steep rate. Timor is a herb, which grows on thorny trees. It is used in chutney with chillies. It cures colds and coughs. Wild Goat, also called Phasi’, is a popular dish of the community when they are in higher settlements. Different parts of Phasi’ are dried in the sun and smoked after marinading the meat in salt. The dried meat is preserved and carried to the lower settlements for winter. Jaa’ma, dried intestine of the wild goat, is also preserved and used in many preparations. Apart from Phasi’, Bhotias eat goat, wild boar and wild chicken. Bhotias preparing Phasi’ meat as part of a religious ritual

The economy of the Bhotias is an aggregation of many elements such as a highly developed trade organization, subsistence agriculture activities, well developed handicrafts, pastoralism and regional sources of income. Their high-altitude based habitat provides them very little land. Thus, the scope for intensive agriculture is very thin. However, there are some specific grains that the Bhotia community grows and consumes. Palti is grown in abundance, a form of buckwheat grown in the higher settlements and used to prepare roti, guthain and jadu. Guthain is made like a pancake and jadu is porridge; the flour is mixed in the water. Jadu is a staple of the Bhotias and is prepared with naphal, and phaphar apart from palti. Kutu or Koda is a variety of finger millet that Bhotias use to make roti, jadu and phandha (a preparation like jadu, to which is added jaa’ma, the dried intestine of phasi’). Phaphar is also grown by Bhotias and prepared in a manner similar to palti. It is also used for religious purposes to make dulang, which is a sacred food offered to the god. A variety of wild fruits are consumed by the community. One is shablo, a white flower which looks like the rose and the fruit is red. Fantullo grows on a shrub and is similar to kaphal fruit but is flat in shape. Bhayanbhalo is a common fruit which grows on a big tree. It looks like a lychee fruit but is green in colour and the ripe fruit is black. Phalalo grows on a big shrub which is black in colour like timur seeds. Tinglo smells like Iodex and grows on a very short shrub which is as high as a coriander plant. It is blue and white in colour. It is very common for Bhotias to form a seed bank system as the community migrates to lower altitudes every winter and they leave seeds behind for the coming sowing season. They dig a hole, put in the seeds, cover it with bail patra (leaves of wood apple) and seal it with stone and again cover that with soil. A stone is put on top to mark the place where the seeds are saved.

This article is written by Srishti Lakhera and is a part of the larger multimedia module called Traditional Foods of Uttarakhand. For the complete module, visit: www.sahapedia.org/traditional-foods-of-uttarakhand