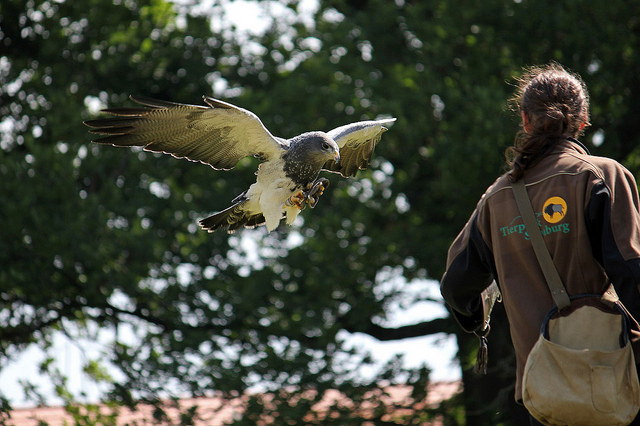 Falconry, the age old practice of using a falcon to hunt , has inspired many poets and artists, including a song titled Bird of Prey by psychedelic band, The Doors.

Sweeping down with utmost grace, a falcon’s sharp and aggressive eyes remain transfixed on its prey. It dives down the arid land, gets hold of its aim, and soars high up in the sky, determined to fulfill its task. Falconry traces its origin to Greece, is an age old practice of hunting wild quarry in its natural state by means of a trained bird of prey. It was a means of survival rather than an aristocratic hobby, and has received thumbs up from UNESCO in 2010 as one of the finest examples of living intangible cultural heritage. It has come to be recognized and respected more as a cultural facet of many societies than just a mere sport.

Falconry dates back to times when no mode of formal communication existed. Being loyal hunting companions of Bedouins, and nomadic groups in other Middle Eastern societies, falconry was the sole source of sustainment for dessert dwellers. But as soon as trade and interaction began amongst countries, falconry came to be identified as a favorite hobby for the nobility and the aristocrats. It came to be adopted as one of the tactics of military warfare in China. It also proved to be an inspiration for many poets, artists and literature laureates, and received imperial patronage.

The Mughals brought the ancient tradition to India and the humble sparrow hawk became the cynosure of many, including Emperor Akbar.

Many countries in Europe, Falconry was considered as a symbol of high social status and was an important part of a gentleman’s education.  A falcon is also used as an instrument of diplomacy and of trade.

However, it was the Middle Eastern countries that came to nurture this sport. Almost 50% of the world’s falconers reside in the Middle East. The Quran, the holy book of the Islam, also permits falconry as a hunting method. In 1973, falcon became the national symbol of UAE. It was through the efforts of Abu Dhabi Authority for Culture and Heritage, an organization that has been actively involved in the preservation of sports heritage, that falconry finally came to be recognized as an UNESCO intangible cultural heritage.

According to officials at UNESCO during the entitlement, falconry presentation was the best file submitted in the cultural heritage category. A collection of documents, films, images and literature was assembled by nations including Belgium, the Czech Republic, Morocco, Saudi Arabia and Syria to safeguard the title.

“The UNESCO recognition will support all the efforts already undertaken by falconers and will develop a solid base for protecting and raising awareness of the ancient sport. However, globally, more needs to be done to safeguard it so that we can pass it on to the future generations, said Kris Ulens, the chairman of the Belgian Federation for Falconry.

Falconry is a complicated indeed. It’s the thin blurring line between sport and art, and between culture and camaraderie. A lot of it goes into understanding what the principles of this sport actually are.

While the most basic and obvious answer is a falcon; there are four different types of birds are used in this sort. Many other species such as owls, hawks, eagles and accipiters are also used.

What are the legal and social complications that come with being a falconer? Is it viable, safe, practical, and expensive?

While the rules differ from country to country, all falconers have to train with a licensed falconer and have to produce at least a two year apprentice certificate before he can endorse the sport. The falcons have to be sheltered in mews and have to be given a strict carnivore diet

So how do you go about training the falcon? What if the bird flies… and never comes back?

Training the bird is a tricky affair. It is usually done through operant conditioning, constant rewarding and under the guidance of a veteran falconer. Many countries like the USA who encourage this sport have clubs dedicated to it.

Like always, technology plays an important role too. While proper conditioning would ensure that the bird doesn’t fly away, the falconer can track the raptor on hunt by hanging a light weight transmitter on its leg to keep a check on its movement and locations.

In fact, much contrary to the popular belief, the bird doesn’t get the prey to the falconer. The falconer has to trade the prey in exchange of a treat.

So does the bird become your homie?

While many argue that the bird and falconer develop a bond over time, research studies say that the bird is not your affectionate pet; neither does it do anything to please or impress you. The relationship is purely symbiotic. The falconer trusts the bird to come back while the bird trusts the falconer to provide it with easy food and protection.

And do they participate in Championships?

While many countries like the USA hold falconry competitions at state and national levels, falconry events limit themselves, mostly to the Middle Eastern parts of the world. Through Falconry festivals, Falconry Olympics and other local affairs, this ancient hunting mechanism continues to nurture in the gulf countries, but its growth is restricted and existence-unknown in many parts of the world. In India too, only two people are known to possess the skills of traditional falconry- the late Shantanu Kumar, an IPS officer, and Shahid Khan, a jeweler by profession and falconer by lineage. He is a proud owner of four falcons, and is the only person in India who is allowed by the law, to keep and breed falcons.

“Recognition is a remote thing. It’s been tough to make both ends meet. I got this art in lineage and would love to pass on my expertise, be it for bird-hit cases at the airports like they do in Europe or for captive breeding of falcons,” said Khan  in an interview with the Times of India.

So will the Falconry Legacy continue?

From being a means of survival to a passionate sport, falconry has come a long way since it first started out millions of years ago. However, today falconry seems to hold importance in only some parts of the world. To others, it is just one of those traditional sports in art and literature, something of the bygone ages, no longer required, and no longer needed.

However, it is a sport that teaches endurance, patience, self-reliance and bravery. It is also the form of an art that requires immense practice, unique skill and commitment. It brings with it a culture that has sustained societies of the world for long, but has lost its identity in many parts of the world today. Although the UNESCO thumbs up has helped the situation, falconry definitely calls for more awareness, recognition and government patronage at national and international levels. Falconry definitely has a long way to go, but it probably needs a single-mindedness of a falcon, to keep it alive.

The History of Hunting as a Sport