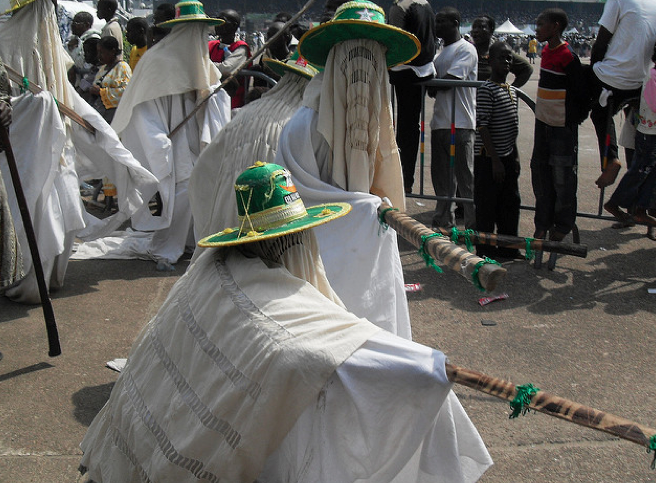 The Eyo festival, also known as The Adimu Orisa play, is a unique cultural festival staged in Lagos state, a South-Western state of Nigeria. The festival dates back to the 19th century when the first play was held to commemorate the life of Oba (King) Akintoye of Lagos.

The Eyo Festival is named after the “Eyo”(costumed dancers or masquerades) which comes out to play during the festival. According to historical narrations, the Eyo masquerades is believed to represent the ancestral spirits, because the then Oba of Lagos (Oba Akinsemoyin) set out to “Ibefun” in modern day Ogun State to assuage the Eyo deity, so that his younger sibling (Erelu Kuti) could bear a child.

At last, Erelu was blessed with two children, whose lineage till date still determines an Oba’s (King) ascension to the throne in Lagos state. Therefore, an Eyo festival is to be held in honour of a departed Oba (a mandatory farewell rite) of Lagos, a high-ranking Chief, an Elder of a ruling family or for the enthronement of a new Oba or new Head of an Iga (palace). However, with modernization and westernization, the notion of eminence has evolved to commemorate visits of foreign and state dignitaries, therefore showcasing the intangible cultural heritage of Lagos. The Eyo festival is mostly held on a Saturday, with the week preceding the Saturday of the festival filled with consultations, announcements and adverts via Koranga and Gbedu drums which are only beaten during an Eyo Festival.

On the eve of the festival, each man that wishes to partake as Eyo are required to present themselves at the Iga (palace) of the reigning Oba, for a feast and blessing from the Oba. On the morning of the festival, each of these men head straight to Agodo (shrine) were they are robed in white flowing cloth from head to toe. From here, they head straight to Enu Owa (where coronation of any Oba takes place), and then visit the Oba’s palace to pay obeisance before moving into the streets of Lagos state.

Their final destination is Tafawa Balewa Square; the venue of the festival. When an Eyo masquerade comes in contact with people he greets them with the phrase; “E Sunrunkunrun, we ma jagbor die!” (An Ijebu dialect of the Yoruba ethnic group) meaning “Don’t fear anything, have a taste of the palm tree”, and taps the individual on his shoulders with the “Opambala.”

When they finally arrive at the venue of the festival, they’re greeted with a loud cheer, encouraging them to dance, sing and displaying unique acrobatic moves, thrilling and exciting all while leaving a memorable impression.

The Eyo festival is truly an awesome display of intangible cultural heritage. It is worth taking a trip to Lagos Nigeria to experience it.