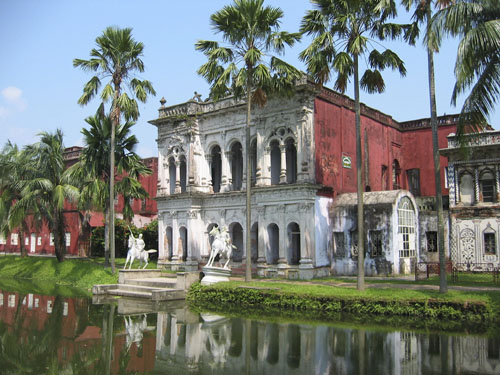 Places to Explore: There are numerous relics and architectural remains located in Sonargaon. Some examples are the Single domed mosque of Mograpara, Tomb of Ponakai Diwana, Tomb of Munna Shah Darwesh and the Single Domed square mosque built by the Sultan Jalauddin Fateh Shah. Khasnagar Dighi is also another notable attraction. There are also numerous large ponds in the area which were used by the weavers to wash cotton threads for producing the famous Muslin fabric. Sonargaon is divided by the Dhaka Chittagong Highway into two unequal halves. The larger side is Panam, which is located in the North. And the smaller one in Mohrapara, located in the South.

Panam Nagar was once known as the Hindu capital city of Sonargaon. However, some muslims lived in the southern part of the region. Residences of early Muslim governors were also located here. Panam Nagar is protected by artificial canals all around. The architecture of this region was developed during the Pre-Mughal era and later during the British rule. Photo Credit: Nijhoom.com

Neel Kuthi: During the British rule, a building was constructed by the East India Company at Dalalpur which is in the vicinity of Panam. It is located in the North of the Dalalpur Bridge on the eastern side of the road. It was built initially for the purchasing and trading of Muslin. It is a quadrangular two stories brick building with a courtyard. The building started right from the edge of the road and is separated by a plinth. The rear of the building is composed of blank walls. The main entrance is located on the road and the other entrance is in the middle of the North wall. Over the years, the original structure of the building has vanished. Thus, only records tell us about the architectural design as well as the character of the original building and how the decorations expressed the transposition from European architecture with the blending of Mughal architecture. Originally the structure had a flat front facade with regular arched windows and door openings.

This is one of the main attractions of Sonargaon. The Folk Art Museum was established in the year 1975 in order to fulfill the dream of the famous painter Shilpacahrya Zainul Abedin. It has a very rich collection of folk artifacts and objects made from different materials. These are the true reflections of our local sentiments, temperaments, idiosyncrasies as well as the skills and expertise of the artisans. It is actually a national institution representing the traditional art and heritage of Bangladesh. There are two galleries in the museum.

How to reach the site

On an average it takes 45 minutes to reach Sonargaon from Dhaka. Interested tourists can purchase packaged tours offered by Bangladesh Parjatan Corporation and private tour operators.

Places to eat: There are several Chinese, Thai and Indian cuisine restaurants in Sonargaon. A few fast food restaurants have also sprung up in the area in recent years. There is also a small cafeteria in the Folk Art Museum.