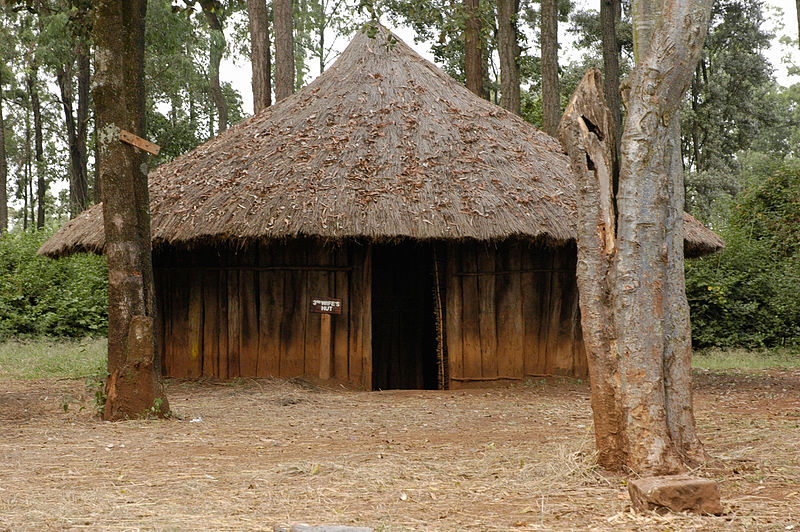 A further look into the theme of built vernacular heritage (#builtheritage) exploring the topic in more in-depth detail from the perspective of a different country, Kenya in eastern Africa.

The wide mixture of ethnic groups in sub-Saharan, central and eastern Africa, makes it one of the most diverse regions in the world, and Kenya is ranked 8th highest culturally heterogeneous country (worldatlas.com, 2016).

The main three ethnic groups in Kenya (Bantus, Cushites and Nilotes) contain a further 42 sub-groups, each of which has its own diverse traditions, customs, and practices.

The method by which each ethnic group constructs their homesteads/huts varies a great deal from region to region and is heavily influenced by the characteristics of the different local settings. These include climatic, geographical and topographical differences as well as economic dependencies, living arrangements and livelihoods (amongst many other factors).

The Bantus group is the largest community and contains subgroups such as Kikuyu, Kisii, Embu, etc. They live not only in the western, eastern and central regions of Kenya but also in coastal areas where the climate is cooler and there is arid to semi-arid fertile land. They are usually agrarian subsistence farmers who grow and produce cash crops such as tea, coffee, and other grain crops.

The houses of the Kikuyu group are constructed with poles and lattices made from saplings and filled with mud, brushwood walls or planked with hewn depending on the hut. The Roofs are thatched with grass. A layer of grass is added before the beginning of each rainy season and the number of grass layers indicates how old the house is (Agikuyu, 2014, Advameg Inc, 2016a; Kamenji, 2013). The Kisii group construct a roundhouse without any windows, made from a frame of thin branches, mud walls and a conically-shaped thatched roof. (Advameg Inc, 2016b; Hakansson, 1996).

The Cushites group, sub-groups of which include Oroma (or Orma), Borana and Rendille, inhabit the north and northeast of Kenya through to the Indian Ocean, where the climate is dry and the land is either harsh desert or arid/semi-arid. They live a (semi-) nomadic life as pastoralists and herdsmen.

The homesteads/huts of these groups are mostly portable huts constructed from tree saplings framed with woven mats and grass. Depending on the group, each village consists of five to ten or ten to thirty family huts arranged huts in a circle or semi-circle shape (Jenkins, 2008; 2015a; b).

The Oroma (Orma) live in round huts comprised of a wooden frame covered with woven mats and grass. Some groups live in temporary settlements and others live in permanent villages (Jenkins, 2008). Most of their huts / houses are made from the pliable saplings of Danisa trees, doum palm leaf fibres and grass mats. There are two types of Oroma houses – a hemispherical house about two meters high, and a beehive-shaped house about six meters in height – and these are grouped into circular manyattas (villages). These manyattas can either be sedentary or temporary to suit their nomadic lifestyle; the former are located in towns and the latter in the bush (Irungu, 2000). The Borana group constructs modular, sturdy houses or huts made up of interwoven branches and thatched grass all the way to the ground. These huts are made to be transportable on the back of a camel so that they can literally “move house” when they go to live in a new location. Their temporary settlements are generally made up of between ten and thirty huts (Jenkins, 2015a). Unlike other nomadic groups, the Rendille tend to live in established villages based around clans. Their villages consist of up to one hundred huts which are constructed with stick frames with wild sisal mats and built in a circle with thorn enclosures for the livestock inside (Jenkins, 2015b; KenyaInformationGuide.com, 2015a).

The Nilotes group, which includes sub-groups such as the Maasai, Samburu, Luo, Turkana and Kalenjin people, live in the area around the East African Valley and Lake Victoria in western Kenya. They are (semi-) nomadic pastoralists and agrarians who also practice fishing.

The Maasai’s huts are called manyatta (or enkaji, inkajijik) and their huts are designed to last for only a few months – just long enough to suit their traditional nomadic lifestyle. The temporary huts or shelters are loaf-shaped and made from a mixture of mud, sticks, grass, cow dung and urine. The simple framed structure with timber poles is fixed directly into the ground and interwoven with smaller branches and twigs. The roof is covered with layers of dried grass. Circular fences (known as kraals, these are shared by the extended family) are created from the thorns of acacia trees to protect their livestock from lions and other wild animals (KenyaInformationGuide.com, 2015b; Maasai Association, n.d.; STEP, n.d.). The Luo group live in one-room circular huts made from mud and wattle, some of which have thatched roofs, others corrugated metal (Achieng Inc, 2016c). Like other pastoralist groups, the Samburu people build their temporary settlements (manyattas) with portable huts constructed with mud walls and grass-thatched roofs. The group usually have five to ten family huts in a group and surround their settlement with a thorny fence. They stay in one grazing area for around five to six weeks or until there is no longer adequate pasture or water available. Every time they move to a new location, they build new nuts in new manyattas (About.com, 2016; KenyaInformationGuide.com, 2015c).

The building methods of the various ethnic groups, the structures of the huts and the layouts of the settlements are all influenced by and integrated with the socio-cultural settings, customs, rituals and traditions of each group. Furthermore, the traditionally polygamous* households of some groups means that homesteads are often comprised of more than one hut (house). There may also be additional outdoor structures such as a barn for the animals. The position, orientation and structure of huts within the homesteads differ depending on the group (Lee-Smith, 1990; Kamenju, 2013).

There are many rituals and customary practices involved in the construction of homesteads and huts depending on the group. For example, in the case of the Maasai and Kikuyu groups, it is the women’s responsibility to build their home. From the age of sixteen, Maasai women learn to construct and maintain their kraals (homesteads) from their mothers and grandmothers (Maasai Association, n.d.; STEP, n.d.) and Kikuyu women are responsible for building their own home (woman’s house, Nyumba) once they are married (Lee-Smith, 1990; Kamenju, 2013).

The Modernisation and Conservation of homesteads/huts

Sensitive changes to the traditional construction practices of the #builtheritage homesteads/huts of Kenya may be necessary to ensure that these are ecologically sustainable and able to withstand recurring environmental and climatic changes, as well as to improve safety and sanitary standards. A housing project named ‘Eco Manyatta’ assists the Kenyan Maasai community in their housing arrangements using environmentally friendly and locally available resources (Eco Manyatta Housing Limited, 2015) so that the Maasai people will be able to continue to live in their traditional style. Local organisations are also working alongside Maasai women in order to improve various aspects such as lighting, ventilation and waterproof roofs (STEP, n.d.).

The roundhouses of Iron Age Celtic Britons share some similarities and resemblance to the homesteads/huts of their Kenyan counterparts in their structure, materials and construction. The Celtic roundhouses used locally available materials such as wood, grass, wattle and animal daubs in their construction. People lived in closed settlements where they found good water and pasture resources (BBC Wales, 2014; Cross, 2015).

The reconstruction and preservation of such ancient vernacular buildings is perceived to be important for historical, educational and tourism purposes. Examples of Celtic Britons Roundhouses can be seen in one of the National History Museum in Wales and the surrounding national parks, whereas the Bomas of Kenya (a museum) has examples of various ethnic homesteads/huts.

By taking a closer look at each of type of dwelling, it is possible to understand how and why each one is constructed differently in order to meet the needs of the people and how they are integrated into their customs, traditions and daily lives. Having searched and written about the #builtheritage of another country, it also enables us to further appreciate the diversity and uniqueness of the cultures, traditions and settings of different countries.

This is especially true of areas in which many different indigenous ethnic groups live and produce their own individual heritage which is manifested in the socio-cultural, spiritual customs and traditions that play a significant part in their lives (Disko & Tugendhat, 2014; IWGIA, n.d.). It is also important to take a holistic and multidisciplinary approach to preserving different heritage sites. Through working with a collaborative, respectful and rights-based approach, as well as through mutual understanding of different traditions and customary settings, careful consideration can be taken into account of the different aspects of preserving and sustaining both tangible and intangible heritage that will last for many more centuries.

This article was produced as a part of a paired task looking at the built vernacular heritage (#builtheritage) of different countries. With an assigned paired intern, Ms. Sheila W Ndirangu of Kenya, the sub-thematic focus was on the built vernacular heritage of community homesteads / huts / dwellings (of various ethnic, indigenous or ancestral groups) in each country. This article is about the homesteads/huts of the main Kenyan ethnic (indigenous) groups, whereas Ms. Sheila W Ndirangu’s article is about the British ancestral housing of Celtic Britons’ Roundhouses.

[*] Under the indigenous customs law, multiple marriages with different wives are allowed and each wife lives in their own hut within the family homestead (Achieng, 2005; Lee-Smith, 1990).

ibbids. (2016b). Countries and their Cultures, Gusii. Accessed 27 Aug 2016 [http://www.everyculture.com/wc/Japan-to-Mali/Gusii.html#ixzz4IRxCgaZZ]

ibbids. (2015a). People Profile, The Borana of Ethiopia and Kenya. Accessed 27 Aug 2016 [http://strategyleader.org/profiles/borana.html]

KenyaInformationGuide.com (2015a). The ethnic tribes of Kenya. Accessed 27 Aug 2016 [http://www.kenya-information-guide.com/kenya-tribes.html]

Separated by Boundaries, Bonded by Wood: Comparing Vernacular Architecture of Belarus and India