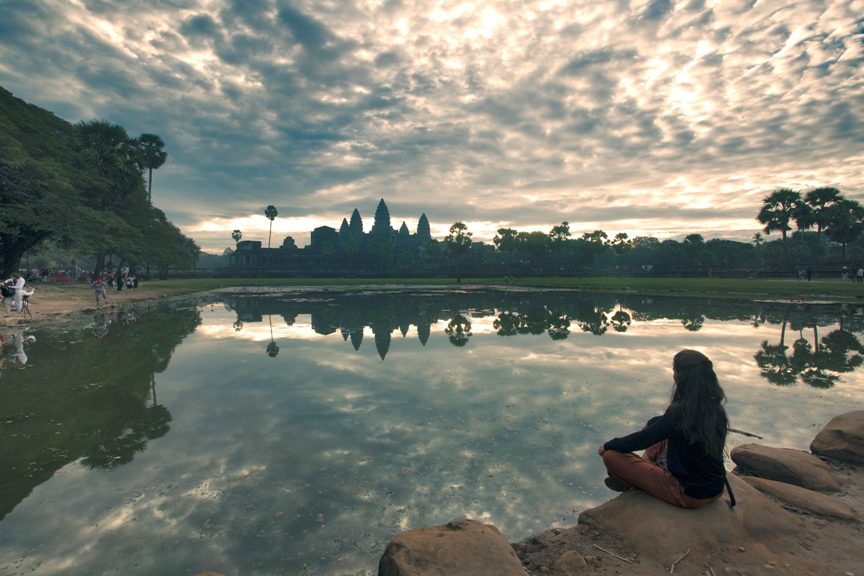 Unbeatable encounters of daily life is what that leaves the most surprising impression on a solo traveler on his trip to South East Asia. Coming from Kerala – south of tropical India – a first glance towards the people around and context of Cambodia, it makes it difficult to shift from recognizable normality. It offered a large pursuit of expediency.

Though a majority of the travel reviews on Cambodia disagreed on doing Solo trips, my mind had already made those facts ubiquitous and invisible. There was only a possible choice to take my cameras along, as my few days long plan for exploration already had prioritized to attend the annually organized Angkor International Photo Fest, a new state of art venture. To get acquainted myself, I moved around only with my Gopro in initial days, which I thought would masquerade as a not so expensive local gadget !!

Well, here historic evidences aren’t the only reason for an unforgettable experience. All the people I met and interacted in Cambodia were kind with me. Standing at the background of many cities and towns, I saw that most of them well impeded the process of modernization. The unmapped streets and exotic cuisine had already taken a lion’s share of my attention and curiosity. It was really astounding when I found myself currency affluent due to the exchange rates. The cost of living seemed affordable and sales not skyrocketing.

While travelling, keeping a diary of one’s escapades is usual. My memories of these places were archived through a Polaroid camera which managed to be my only companion at instances. One such was an interaction with a Buddhist monk from Myanmar who was mouthful of India and his experiences on travel.

The travel saw its triumph when I visited Angkor Wat Temple for the sunrise view. The magnificent view portrayed itself as a self-serving historian, reciting its own stories. It was originally constructed as a Hindu temple of Lord Vishnu for the Khmer Empire by Suryavarman II in the early 12th century in Yaśodharapura, which is the present-day Angkor. It gradually transformed into a Buddhist temple towards the end of the 12th century. Presently, it is the largest religious monument in the world, on a site measuring nearly more than 400 acres!!!

Regulations forbidding flying helicam made me choose not to carry it along my journey. This made me audacious enough to take a ride in Aeroprakt A22L2 Helicopter to see the bird’s view and take photographs of Angkor Wat Temple complex. Exploring a sky view of the entire complex was unparallel to any picturesque images so far I can remember. I felt contented for the accomplishment and the experience.

Cambodia and its people offered me marks of genuine care and friendship, despite formidable illustrations through various travelogues. The place offers much more than what we expect. Worth visiting!!! When I speed around through the episodes of feat, I yet again look forward for a moment with a sense of relish – a Sunrise in Angkor Wat !!!

All pictures by Prasanth Mohan

Navratri and the triumph of Good Over Evil