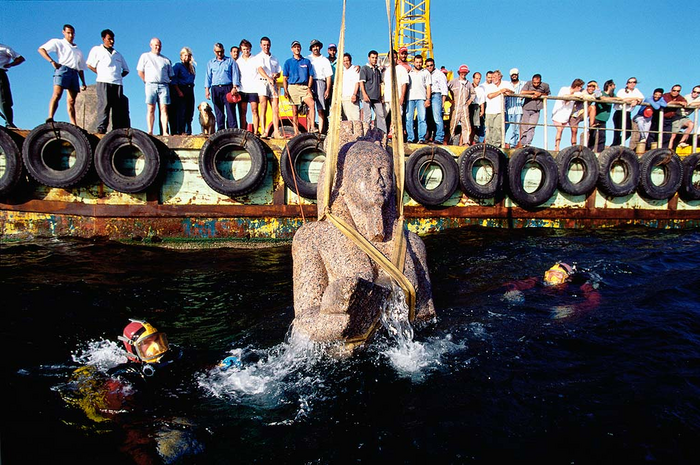 UNESCO in the Convention on the Protection of the Underwater Cultural Heritage (2001), defines underwater cultural heritage as, “ all traces of human existence having a cultural, historical or archaeological character which have been partially or totally under water, periodically or continuously, for at least 100 years”. (UNESCO, 2001, para. 1 (a))

In 1996, Supreme Council of Antiquities (SCA) founded a new department that was devoted to underwater antiquities especially after uncovering the lighthouse location and rediscovering a part of the royal quarter in the Eastern Harbor. It is situated in Alexandria and is a seabed of submerged archaeological remains. This new department, is responsible for protecting whole underwater cultural heritage along Egyptian coasts, collects a group of differentiated specialties including Egyptology, Graeco-Roman, Coptic and Islamic studies. Cooperating with various foreign archaeological expeditions, Egyptian diver-archaeologists train and become well informed with modern methods of discovering underwater monuments.  (Abd-el -Maguid, 2010, pp. 1, 2, 2012, p. 194)

Ancient city “Thonis-Heracleion” is considered one of lost cities and was only discovered in 2000 by underwater archaeologist Frank Goddio, Director of the European Institute for Underwater Archaeology (IEASM). Regarding Frank Goddio’s approval, “the archaeological material has revealed that Heracleion and Thonis were in fact one and the same city with two names; Heracleion being the name of the city for the Greeks and Thonis for the Egyptians” (Goddio, n.d.). So, in 1999, IEASM announced the discovery of two cities “Menouthis” and “Heraclium”(Ruppe & Barstad, 2002, p. 527).

This metropolis is an ancient location of Egyptian city before the Greek city “Alexandria”  was established and acted as the main entrance of entire ships coming to Egypt from Greece. It was occupied during Dynastic period (about 8th century B.C.) and was ascribed religious significance with the worship of the Great god Amun. Due to various of natural phenomenons like earthquakes and floods, the majority of features of Thonis-Heracleion were gradually started submerging under the sea (Goddio, n.d.; Mount, 2016). In the 2nd century B.C., the city started  fading while Alexander the Great rapidly founded Alexandria as a main Egyptian permanent harbor (Shenker, 2016).

The name of ancient city Thonis-Heracleion was preserved within classical manuscripts.  The Greek historian Herodotus (5th century B.C.) has presented a description of the great temple of Amun and Khonso (Herakles for Greeks), located to the eastern side of Canopus. He has been estimated that the of Sparta’s Helen, before Trojan War, visited Heracleion with her lover abductor Paris of Troy. Moreover, the geographer Strabo has also left written evidence about the Heracleion city. But, on the other hand, the most information about its existence was unfortunately lost. (Goddio, n.d.; Shenker, 2016)

Luckly, archaeologists discovered the Stela of Sais decree. This Stela is made out of basalt and dated back to the early 4th century B.C. It was discovered in-situ at Amun temple. Thonis-Heracleion Stela indicated the principles of tax imposition in Egypt:
His Majesty [Pharaoh Nectanebo I] decreed: Let there be given one-tenth of the gold, of the silver, of the timber, of the processed wood and of all things coming from the sea of the Hau-Nebut [the Mediterranean] … to become divine offerings to my mother Neith (Shenker, 2016)the Stela of Sais Decree

In 1968, UNESCO had started its first mission to Alexandria with the pioneer diving-archaeologist diver Honor Frost and the geologist Vladimir Nesteroff. It discovered “both the ruins representing a part of the Pharos, as well as the remains of submerged buildings representing the lost palace of Alexander and the Ptolemy”. Then, in 1988, UNECO completed its second mission highlighting the aspects of conservation and development for underwater cultural heritage sites in Alexandria. (UNESCO The Protection of the Underwater Cultural Heritage, n.d.)

From my overview, the journey of excavating underwater heritage had already started in 1992 by Institut European d’Archeologie Sous-Marine (IEASM) under the supervision of underwater archaeologist Frank Goddio in the eastern port of Alexandria discovering various magnificent monumental objects such as parts of the city of Thonis-Heracleion that date back to the Greaco-Roman period specifically between the 1st century B.C. and A.D. IEASM discovered the leaders’ life through its discoveries of the flagship L’Orient, Le Guerrier and La Serieuse in Abukir bay. It also uncovered; the ruins of a Canopus temple representing its architectural features; Byzantine and Islamic gold coins and royal portraits which probably date back to the 25th or 30th Egyptian dynasties and the Ptolemaic period. Significantly, IEASM indicated the location of an ancient Egyptian city “Herakleion” and its harbors’ arrangement especially after excavating the Ptolemaic Stelae. (Abd-el -Maguid, 2012, p. 196. 197; Goddio, n.d.)

In 1999, Torino University had done an excavation campaign discovering Nelson’s Island, in Abukir bay, that had witnessed the 6th century B.C. events. This campaign excavated the late period necropolis (26th – 30th dynasties) and also the cemetery of British Admiral Nelson’s soldiers who died during the Abukir battle in 1799. Additionally, there are a group of significant discoveries such as Macedonian-style houses and Greek military forts. (Abd-el -Maguid, 2012, p. 199)

I agree with Ian Oxley and David Gregory, site management as a professional expression is not equal to preservation but also needs to draw the best ways of controlling and , mitigating the effects of surrounding dangerous impacts. Hence, it has been clarified by Donald H. Keith that “conservation is the practice of cleaning and stabilizing artifacts using a set of specialized techniques”.(Ruppe & Barstad, 2002, pp. 715, 738)

Heritage sites are entirely so dynamic, consequently the management process must recognize the degradation progress that led to archaeological remains to gradually alter or recess. Strategically, he indicated that management could be concentrated estimating the micro- and macro impacts that to apply the process of heritage impact assessment, either environmental impact or human-induced impact assessments[1], attempting to find out the potential solutions mitigating these changes especially bio-deterioration and corrosion of artifacts. Then, he asserted the significance of auditing process to ensure the conservation statement of the submerged heritage site.(Ruppe & Barstad, 2002, pp. 715, 717, 719)

So, Oxley and Gregory agreed with UNESCO 2001 convention especially article no. 2, paragraph no. 5 that to talk about in-situ preservation or conservation as a preferred option. In-situ preservation consolidates the historical environment of the archaeological objects ensuring scientifically the heritage significance. Also, it has been indicated that, “under normal circumstances, heritage is well preserved under water owing to the low deterioration rate and lack of oxygen, and that it is therefore not per se in danger”. Subsequently, in some cases, “intentional reburial is an important technique for the recovery of information from archaeological sites without incurring the substantial costs of conservation and storage” and in case of applying this technique, the archaeological monuments should be audited conserving permanently its original material. (Ruppe & Barstad, 2002, pp. 719 – 723; UNESCO, 2001, pp. 13, 20)

Regarding one of the recommendations of the International Workshop on Submarine Archaeology and Coastal Management (SARCOM) in 2006, SCA, cooperating with UNESCO,  setting up of National Maritime Museum in  “Alexandria” was proposed, specifically at the foot of Qaitbay Fortress in the Eastern Harbor, exploring and conserving Egyptian underwater cultural heritage in-situ (Abd-el -Maguid, 2010, p. 2, 2012, p. 204; UNESCO, 2001, p. 9; UNESCO The Protection of the Underwater Cultural Heritage, n.d.).

Heritage sites and museums are the places where the people can realize the past and communicate with the heritage area emotionally (Smith, 2015, p. 459).  Regarding that, the proposed museum of Egyptian underwater heritage will be designed in dual nature[3], inland and underwater, breaking down the traditional form of museum, following UNESCO 2001 Convention in order to preserve this heritage in-situ against a group of both environmental and human-induced impacts guaranteeing the conservation state of the underwater archaeological site (Donahue, 2015; UNESCO, 2001, p. 9), and allowing visitors to live different heritage adventure of finding out the most important features of ancient Alexandria. (Bossone, 2008)

Unfortunately, for finance-related issues, Egyptian Ministry of Antiquities paused going further with the underwater museum. So, I would like to suggest reactivating the decision of allowing the paid diving visits that since 2001, there are two locations which were opened by the General Department of Underwater Archaeology, SCA, for diving tourism representing Egyptian underwater cultural heritage. (Abd-el -Maguid, 2010, p. 2, 2012, p. 204)

In 2001, UNESCO prepared an international convention, within the General Assembly, aiming with the State Parties “to ensure an effective protection of underwater cultural heritage and its preservation for future generations” (UNESCO, 2001, p. 13).

Preserving Egyptian underwater cultural heritage, Mr. Mohamed Abd el- Maguid, the General Director of the General Administration of Underwater Heritage, viewed within his report for UNESCO the initial Egyptian legislations considering the submerged antiquities:
The Antiquities’ protection law (Law No. 117 of 1983 amended with the law No 3 of 2010) was issued to supersede law No. 215, issued in 1951, and all other previous texts that contradict its articles. The first two articles define the antiquities and their sites and placements. Article 5 indicates the organizing authority. Article 6 considers antiquities as being common wealth with some exception. Whereas the articles 31 & 32 care with the administrative and scientific organization of the archaeological activities. (Abd-el -Maguid, 2010, p. 3, 2012, p. 204)

Mount, H. (2016, May 18). Treasures of Egypt’s Atlantis: Raised from the Deep after 1,300 years – and Now on Dazzling Show in the British Museum. Daily Mail Online. Retrieved from www.dailymail.co.uk/news/article-3595708/Treasures-Egypt-s-Atlantis-Raised-deep-1-300-years-dazzling-British-Museum.html

UNESCO The Protection of the Underwater Cultural Heritage. (n.d.). The Alexandria Underwater Museum Project [Website]. Retrieved November 19, 2016, from http://www.unesco.org/new/en/culture/themes/underwater-cultural-heritage/museums-and-tourism/alexandria-museum-project/
N.B. Let’s see a documentary film about Sunken Ancient City of Heracleion
[1] Unfortunately, underwater heritage in Alexandria faces a group of human-induced impacts either by individuals such as the gestures of fishermen-divers and the high demand of building on non-explored coasts, or by government like the coastal districts’ improvements and so on. (Abd-el -Maguid, 2010, p. 2, 2012, p. 194)

[2] To get more a historical background about underwater archaeology phases in Alexandria (Mostafa, Grimal, & Nakashima, 2000)) [3] To read more about the proposed museum,(Hassan, 2015)
Egyptian underwater cultural heritage