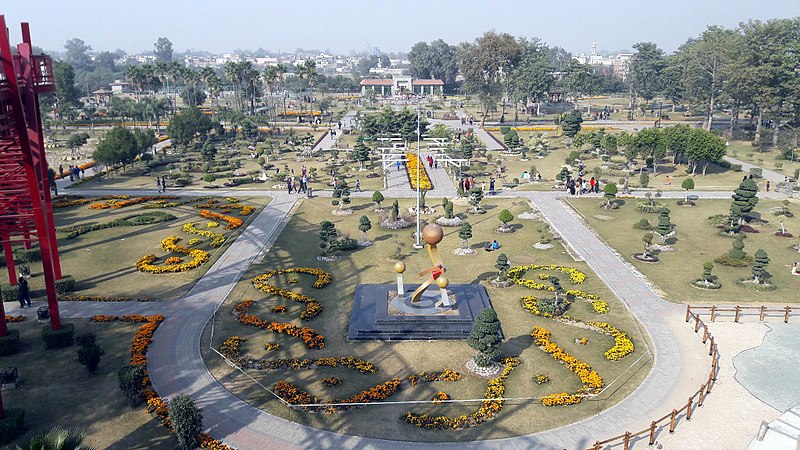 A comparison of Egyptian Gardens with Colonial Gardens and Post Independence Gardens in Pakistan is pretty much necessary to trace the roots of the discipline of Garden Design itself. The tradition began from simple fruit and vegetable gardens, which were irrigated by the River Nile. However, they did not just stop at these elements and the tradition further transformed to pleasure gardens with flowers, ponds and alleys of fruit and shady trees. What is more interesting on how they used water. It is evident that water is the main source and ingredient of all life that exists. These gardens had a unique system in which water was first brought in leather buckets and carried to the garden. Later, it was lifted from the wells using one of the earliest methods of small-scale irrigation – the shadouf.

There were several types of Egyptian Gardens but amongst the very first were the Palace Gardens, which started to become an observation just before the Middle Empire (2035-1668 BC). The gardens typified under this category had a very large area with huge geometric patterns and ponds. It is noted that there was one palace garden (The Garden Pond of King Snerferu), which had ponds big enough for boats rowed by twenty oarsmen.

After this time period, the next time period which comprised of the New Kingdom came along. This Kingdom cannot be talked about without addressing to the most complete plan of a home or a villa and its garden design of Amenhotep III. The vastness of scale was a dominating factor in this garden as well; this caused it to have a monumental entrance, several trees and many vineyards. These vineyards provided wine harvest. It also featured several pools which contained lotus flowers. The fragrance and such aromas caused these areas to be areas of tranquility and relaxation.

During this time period of the Egyptian Gardens – other types of gardens that were made included the Temple Gardens and the Funeral Gardens. For fulfilling the essence of decoration and purposefulness, they had both flowers and herbs, commonly used species involved acacia, aloe, anise, caraway, castor beans, cassia, coriander, cumin, cucumber, dill, elderberry, gentian, lotus, mint, myrhh, pomegranate, poppy, squill, saffron and wormwood.

It is sufficient to say that this can be compared directly towards a local case study, which is an observation in direct relation to the gardens of today – Lawrence Garden, (now known as Bagh-e-Jinnah) in Lahore, Pakistan. (Bagh-e-Jinnah, Lahore)

It is essential for this comparison to commence to link with the commonalities of modern and Egyptian Gardens. Lahore which is labeled and known as the City of Gardens, there have been attempts to add green spaces for the beautification of the city but a compare and contrast can only be developed using Lawrence Garden, Lahore.

Moving further towards the similarities between the two, the growing together of flowers and herbs is a prevalent spectacle in this garden as well. This garden has three main divisions, which include zoological gardens, botanical gardens and recreational gardens (ornamental gardens). Other very similar instances include the vastness of space (112 Acres of Lawrence Garden) and monumentality due to the large pathways, clear spaces, fragrant trees, shrubs and other plants etc.

There are a large number of trees of different varieties, ages and sizes. Be it a Gab or a Ficus, Delonix, Buddha, Sterculia, Kamila, Putranjiva, Dalbergia or Erythrina, they are there showing their distinct identity and helping out in combating the greenhouse effect, providing clean air and oxygen and lowering the temperature in summer. Special herbs and exotic flowers grow together in this large complex.

Although this garden and like the many others which came after it to the city of Lahore (Race Course Park, Gulshan-e-Iqbal Park, Model Town Park, Botanical Garden Jallo, Lahore, etc) do not follow a very strict geometry like the Egyptian Gardens, all the other elements are very common and frequent. There are instances like Jallo Parkwhere the orderly symmetrical approach has been put to use but only present in some portions of the whole and not as an entire unit into practice. Some geometrical features have withered with time as well due to encroachments and commercialization but similar ideas have been prevalent in today’s gardens. This is due to the Egyptian Gardens being the prototype of all gardens throughout Europe and the Near East for over three thousand years.

However, not everything is entirely identical from these ancient traditions when correlating with today – the methods of irrigation employed for the garden space is a major difference. For example there was a mile long canal existing at the villa and garden of Amenhotep III, while in the modern gardens, scattered water bodies as a visual and experiential aesthetic to the entire garden space are a common motif.

A daring globetrotter? Travel to these 7 eccentric places around the world!