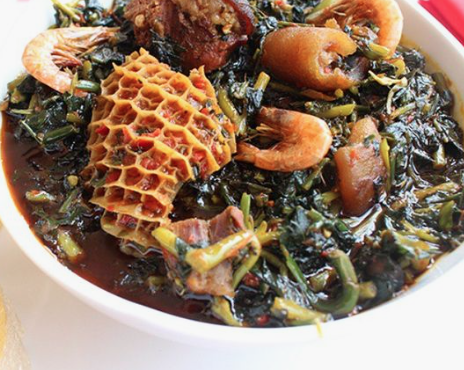 Food is an important component that lends to life, and over time, it has positioned itself into the mainframe of culture. Every culture has its own staple meals, and the Efik Vegetable soup is an integral part of Efik, Ibibio and Akwa Ibom tribal diets and some parts of Southern Nigerian culture.

In the Southern part of Nigeria, “Eba”, also called “Garri” is one f the commonly consumed foods. It is made mainly from cassava, though there are different materials from which a semi-solid paste can be made. However, “Garri” remains a top priority.

Semi-solid paste such as Eba, Semovita, Amala, Tuwo, Pounded yam and the like are eaten with a wide choice of soup(s) available to the Nigerian populace.
Edikiakong soup, also referred to as the ‘Efik Vegetable soup’ is a native of the Efik and Ibibio communities in the present Akwa Ibom and some part of Calabar in Southern Nigeria. It is prepared using the combination of the following ingredients:

One must season the meat (beef or Chevon) together with the stock and allow it to boil for some time. After this, the Pomo and shredded smoked fish are added to soften them and infuse the aroma and taste into them. A cooking spoon of palm oil must be added and allowed to blend with the stock. The blended Rodo is added, stirred and this is followed by the addition of periwinkle and water leaf and allowed to boil for five minutes.
Add the crayfish to taste, final introduce the fluted pumpkin and allow boiling for about five minutes; the food is ready and can be served with a healthy portion of Eba!

The history of the Samosa