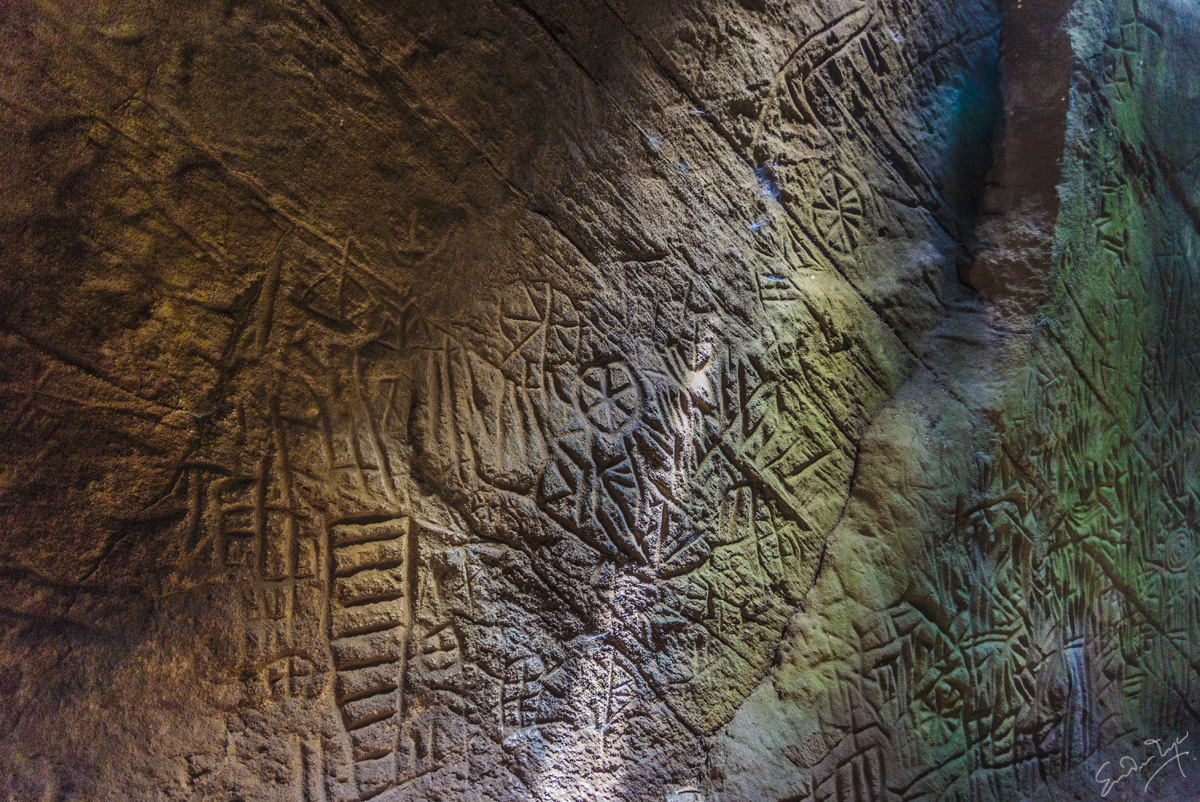 The main attraction that can be found within the Edakkal caves are the stone age etchings, writings, scripts, the geometric figures and the scenes from the life and culture of neolithic and other periods of that time.

The location of the caves provides ample satisfaction to the adventurous spirit in us. Keeping in mind the convenience of the adequate facilities and modifications in the form of steel staircases,  the rugged beauty of rocks and the panoramic view all around still leave it’s charismatic impact on you.  Reaching the top, before entering the caves, if you stop for few minutes and look around, you can very well imagine what intensity of passion Fred Fawcett must have anchored to reach there and discover the priceless treasure of these caves. Fred was superintendent of Police of Malabar district. His chance encounter with a stone weapon in a coffee estate ignited his curiosity to search the adjacent hills and rocks to find some kind of rock shelters.

We left our vehicle in the parking area and started walking on the road towards the caves. Up to a certain distance, small shops selling eatables, and souvenirs can be seen but after the ticket window, nothing is available. The road rises gradually and after some distance the rise becomes quite steep. There are shady, tall trees and wild vegetation on both the sides of road. On the way, nature treated us lavishly with spectacular panoramic views.

Soon, the well laid road gave way to rocky path. Slightly out of breath we trudged on but then walking, climbing over randomly piled rocks brought us a bit nearer to the times bygone. And then we reached a place where there was a very narrow passage between the  rocks. To pass through that we had to bend a lot and use precariously placed rocks as steps. That really added to thrill. 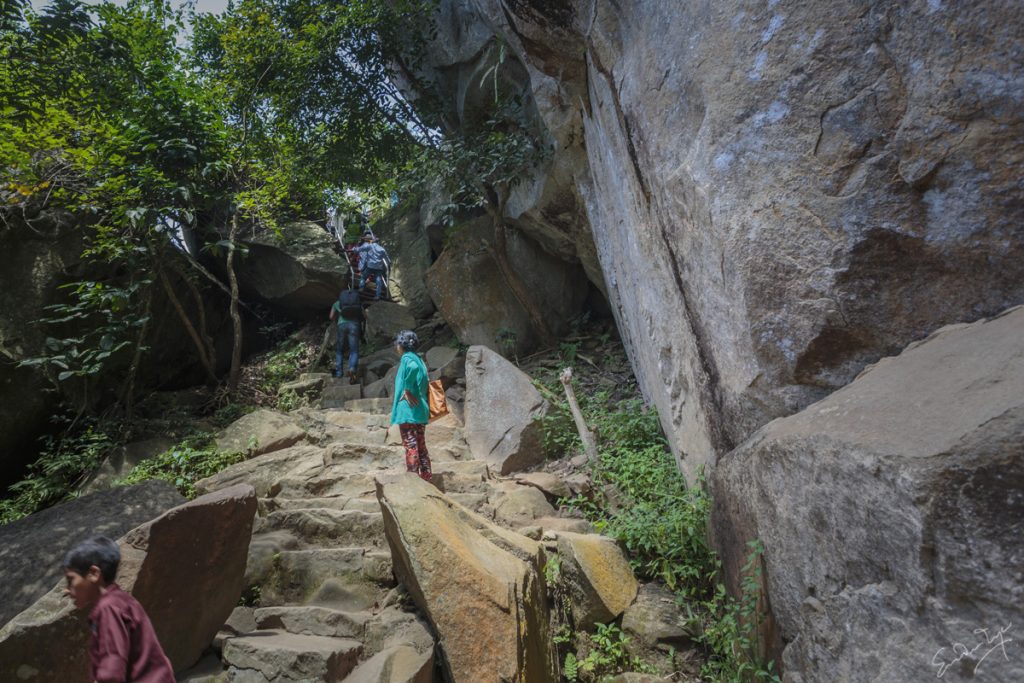 Hoisting and balancing ourselves over the boulders, we finally reached the entrance to the first cave. This entrance has a steel gate, perhaps to regulate traffic. Only a controlled number of tourists are allowed at a time.

From this gate, we descended a few steps to reach the main cave. And here, on the rock walls, was a gallery of carvings and etchings, animals, human forms, some figures looking like tribals with head gear and ornaments etc., some geometric shapes and drawings look like kolam drawings. Then there were animals, various symbols and scripts too. Everything was scattered all over the walls of caves.  How could they engrave so much on rocks? What were the tools used and such lasting imprints that centuries after we stood there agape with wonder and amazement.

It was intriguing to see those imprints from centuries ago. With what instrument were those drawings made? The figures were all over the rock wall. The cave must have been different at that time and then this certainly was not an easy task. Why did they put so much labour into it?

Man has always had creativity inside him and urge of expression too. What do all these figures represent? So many questions floated in my mind. Look at the wheel like figure. What is it? A representation of time? One of man’s inventions? Can you make out those two human figures in the picture above? It looks like a tribal king and queen, hands up, in a dancing pose.The above image is definitely is some script. It is believed that these drawings and writings in the cave do not belong to any one particular period rather they belong to many spans of time. What have they written? Wish I  could read it.

It appears that due to some natural phenomenon a giant rock was divided in two parts creating a gap in between. On the top, another rock is placed but it does not cover the wide opening fully and sunlight pours in lightening certain parts on different parts of the day.

As we all know nature is the greatest artist. The very mechanism of creation of the caves is a marvel that simply baffles the mind.

A heritage walk at the Bahadurgarh Fort