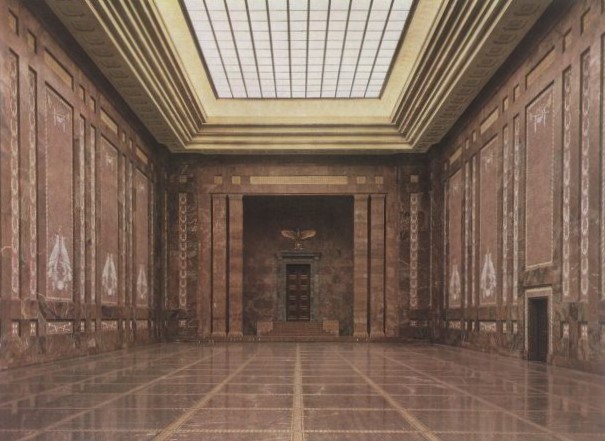 “For the commission to do a great building, I would have sold my soul like Faust.
Now I had found my Mephistopheles. He seemed no less engaging than Goethe’s”.

At a time when the Nazis were Germany’s rulers, the Totalitarian regimes architecture characterized much of Europe urban landscapes. Totalitarian regimes gave impetus to found new cities or rebuild parts of existing ones through the skilful use of advanced and avant-garde projects.

Architecture and urban reshaped landscape played a pivotal role in the Nazi party’s plans to create a new Germany forged by a cultural rebirth and shaped by the Third Reich ideals and “spirituality”. A sad and yet worth mnemonic period of our common European history is anchored in our memories and may vex our hearts but, still, needs to be told to be better understood by means of Hitler and Speer’s Berlin architectural reconstruction project to create Welthauptstadt, World Capital, Germania.

Berlin, 1937. Adolph Hitler and his favourite architect, Albert Speer, meet to design a new, rebuilt Berlin. They want to create a new city representing the European capital of a brand-new Germany, the capital of a never-ending Reich. Their desire was focused on turning the metropolis of Berlin into Germania, centrepiece of the civilised and Nazi ruled world.

The undertaking was truly important but not a pipe dream. The original sketches entailed a grand boulevard running along the axis North-South of the city for seven kilometres towards the city centre and known as the Street of Magnificence (Prachtstrasse). A huge Triumph Arch able to fit the Parisian namesake inside it would have represented the Southern end of the city, while the Northern end would have been made real through the domed People’s Hall, the largest enclosed space in the world if only it had ever come to fruition. The size of the Hall was around 200 meters long and 250 meters in diameter. It could have easily accommodated 180,000 people and speculations suggest that the domed building would have had its own weather system due to its incredible accommodation capacity: people’s sweating and breathing would have fallen down precipitating, almost causing an indoor rain!

Once the project made public in January 1938, the public response to it was enthusiastic because of the intent to construct new buildings for civic and commercial purposes. If the radical re-development of Berlin involved the construction of entire suburbs to provide modern housing, administrative buildings and allow commerce, on the one hand, some areas of the city were knocked down to make room to Germania, on the other. From 1939 to 1942, project-earmarked quarters and spaces of the city were cleared and many civilians, “Aryans” included, were forced to rehouse somewhere else. Though choices were made available, i.e. rehouse in modern, brand-new-built accommodation in the suburbs or go to live in properties where Jewish had been evicted from, public disruption was as palpable and real as the grandiose Hitler and Speer’s project.

It may be said that behind the disguised public-oriented and socially useful nature of the Germania project, Hitler’s architectural fantasies were concealed: Germania was and would have been, if ever completed, the ideal representation of Nazism. Within the Nazi context and visions, the aim of Germania was to provide a first and everlasting example of a monumental architecture throughout a city, rival to ancient Babylon and the Roman Empire in grandeur. Germania was also conceived to inspire future generations of Aryan Germans and to those privileged wealth visitors and tourists that, one day, might have walked the boulevards, recovering the huge debt that the project would have left.

Architecturally, the project was praised by many newspapers worldwide such as the New York Times which described it as “perhaps the most ambitious planning scheme of the modern era”. There was a city plan but the human dimension lacked. Behind the narrow and yet predominant Speer’s architectural sphere, Hitler was not interested in the social aspect of the project or in the future well-being of people that would have lived in such a Reich World Capital. Human beings were reduced to mere pawns. The solace was the grandeur for grandeur’s sake.

Crystal-clear examples of this architectural yearning count: the Reich Chancellery, built to intimidate foreign dignitaries and politicians, who were coming to visit the Fuhrer, with its incredibly 146 meters long corridor. Only Hitler’s office was 400 square meters; Herman Goring’s Reich Air Ministry was the largest office building in the world at the time with a floor area of 112,000 meters square and 7 km of corridors!

Germania was the icon of Nazi megalomania composed of bold edifices, long boulevards and authoritarian buildings. Few parts of the Hitler and Speer’s grande disegno saw daylight but what remains of the built heritage and architecture may be found on the streets of Berlin. It is important to remember the uncomfortable WWII past period because, through its dissonant memory, we can promote democratic values and mutual understanding.

Today, it may be difficult for untrained eyes to see and grasp evidence of Hitler and Speer’s Germania unless these eyes know where to look. When I was in Berlin in winter 2010, I enjoyed the sight of some street lamps near the Brandenburg Gate, elegant source of light before the more powerful fireworks lights of the Berlin New Year’s celebration. I stayed in Berlin with some friends for the New Year’s week and, today, armed with more knowledge and awareness, I symbolically uncork a spumante bottle to both remember a sad parenthesis of our human history and hope for the construction of a peaceful and sustainable future.

Marco Romagnoli, postgraduate student in Tourism Economics and Management with a focus on Cultural Heritage and Tourism at the University of Bologna, writes this article.
Email: marco.romagnoli91@hotmail.it

When Britons Lived in Huts