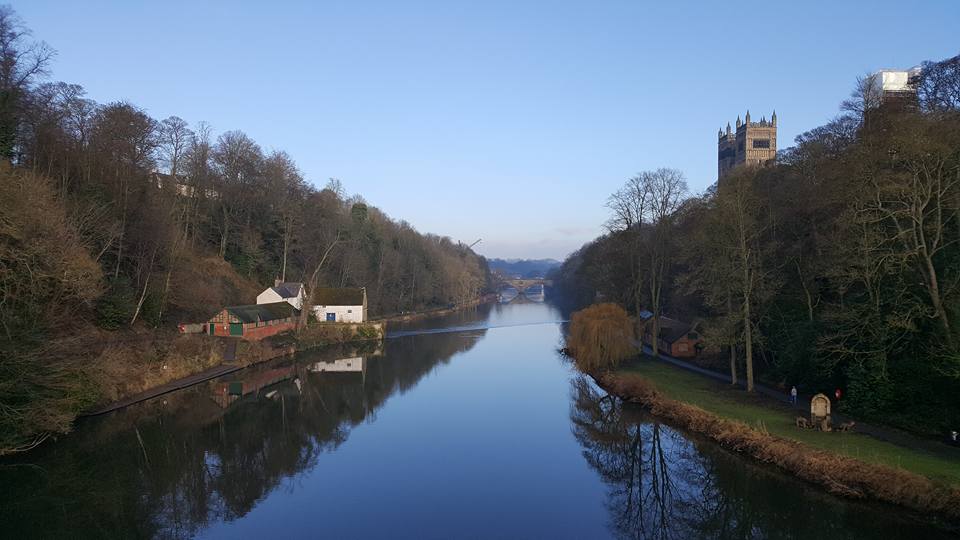 The focus of our photo walk on the 30th January 2017 was medieval heritage, in particular, medieval heritage along Durham Riverbanks. I wanted to concentrate on the riverbanks rather than heading straight to the main aspects of the site; Durham Castle and Cathedral. These buildings were inscribed on the UNESCO World Heritage List in 1986. This reflected the traditional, westernised, understanding of heritage as historical monuments. Today, the understanding of heritage recognises that buildings do not need to be monumental or particularly old, to be significant. It also includes intangible cultural heritage; Durham is rich in myths, legends and folklore. With the evolution of the definition of heritage, the site boundaries were extended in 2008 to include the building and spaces between the Castle and Cathedral, known as Palace Green. Currently, the site management is looking at expanding these boundaries once more to include the riverbanks. This photo walk was designed to gain a deeper understanding of the importance of the riverbanks in relation to the site and to discover the buildings and bridges which contributed to the site in both trade and access during medieval times.

As you can see in Figure 1, the riverbanks surround Durham Cathedral and Castle, acting defensively against attack. Only the neck of Durham peninsula was vulnerable hence the strong Castle defences in that area. The steep riverbanks made the rest of the peninsula almost impossible to attack.

Joined by Christine, Michaela and a mini-explorer Dean, we began the photo walk, so that the castle walls ran to our left-hand side, and followed the path up to the Old Fulling Mill Museum of Archaeology.

Prebends bridge, as standing today, was designed by George Nicholson between 1772-1778. However, this bridge replaced the original medieval wooden footbridge, built in 1574 which was swept away during a flood in 1771.

The Balustrade on the bridge, a lovely architectural feature, we found was now covered with a metal grid. However, we still got some nice photos through the grid!

Just off Prebends Bridge lies an art installation, It is a stone structure known as ‘Reveal’, by Richard Cole. It was unveiled in 1997.

Further along the riverbanks, moving back towards the town we had excellent views of the Cathedral and the Old Fulling Mill, face on.

There were also, better views of Durham Castle.

Framwellgate bridge concludes our photo walk. It is a medieval bridge crossing the River Wear, built after 1400 to replace a wooden one damaged by flooding in the 12th century. Until this replacement bridge was completed, a ferry would carry people across and the toll paid was given the Bishop of Durham and the Prior of Durham Cathedral Priory.

Despite the cold weather, we enjoyed plenty of sunshine for our photo walk. The cloudy parts only added to the dramatic backdrop that is, Durham World heritage site and one can almost imagine what medieval life would have been like there. The importance of the riverbanks and the heritage is that its houses become clear when exploring the area. Not to mention the countless archaeological finds from the underwater archaeologists at Durham University. These finds include many trade items such as cloth seals from the medieval period. These are mainly found around Old Elvet Bridge, on the other side of the peninsula. More information can be found at the Durham River Wear Collection. In 2007, divers found artifacts in the river at Durham. They included gifts from Pope Paul VI and a commemorative medallion presented for the Queen’s coronation in 1952. They were in the possession of the 100th Archbishop of Canterbury. It is unknown how they come to be in the river.  However, it is believed he threw the treasures into the river as a ‘gift to the city’.

This is the oldest cave temple in Bengaluru