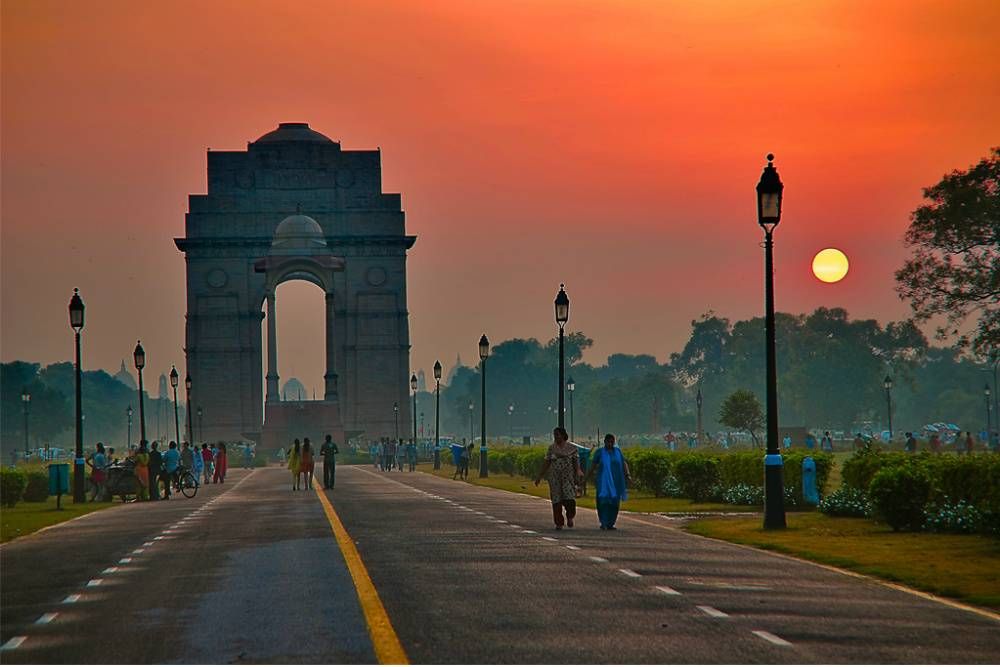 Public spaces are spaces that are accessible to the general public, such as — roads, streets, public squares, parks and beaches. Public spaces are great when celebrations are held, social and economic exchange occurs, friends meet each other and cultures mix.

New Delhi is considered the heart of India, designed and developed after 1911 when the country’s capital was shifted for the last time. Exploration of popular public spaces in this area can be started with the India Gate  (open for public since 1931), that draws people from the city and nearby towns everyday, irrespective of weather conditions.

It is one of the favorite picnic hangouts of Delhi, with bringing their own food or choosing from a variety of street food or enjoying the greenery.

The India Gate hexagon complex leads directly onto the Rajpath (earlier known as the King’s Way, a ceremonial boulevard lined with lawns, ornamental pools and rows of trees). At the other end of the Rajpath is the Rashtrapati Bhavan, the official residence of India’s President. The Rajpath and India gate witness the ceremonial Republic Day parade and many protests every year.

What makes this a great public space is the location it is situated at, its history,  and landscape with lush greenery and structures that were once princely houses but now serve as as offices of the state and some of the finest museums.

The Children’s Park with many rides and swings is another hangout around the India Gate, and usually full to the capacity during most evenings. Complementing the India Gate stands the Jaipur House with its dome-like structure in buff and red sandstone, just opposite this park.

It houses the National Gallery of Modern art, with its exquisite and large collections, programmes and activities. With the entry fee of just Rs 10, the journey of modern and contemporary Indian art with many masterpieces can be experienced here.

From India Gate hexagon with the exit on Copernicus Marg leads to another favorite public hangout that is slightly off-beat — the Mandi House circle — the cultural nucleus of Delhi. The story behind its name is quite interesting:  The building was the former residence of the Rajas of Mandi (in Himachal Pradesh), where they stayed after the establishment of New Delhi in 1911. Previously, it was known as “Khandraat Kallan” (great ruins).

Later, British architect Edward Lutyens designed the plots around the J-circle, now popularly known as the Mandi House circle. The building was taken over by the Indian government after Independence for official use and the palace was dismantled in 1970s for the offices of Doordarshan, the national broadcaster. But the name Mandi House has stuck on.

The Mandi House circle houses a number of cultural institutions around it.  Art lovers can enjoy exhibitions at the Triveni Kala Sangam and Lalit kala Akademi galleries; public lectures and film screenings on art at the Kaustubh Theatre, Rabindra Bhawan; watch play performances at the Kamani, Meghdoot theaters, cultural performances at the Shri Ram Bhartiya Kala Kendra, Sangeet Bharti at world-class auditoriums; nature lovers may want to visit the National Museum of Natural History at the adjoining Tansen Mark.

All the lanes and by-lanes are dotted with tea stalls and juice corners for the enthusiasts to sit for a hangout or discussion. The monumental metro station is the newest addition in this line. Mandi House holds the cultural pulse of the city, and has been designed and developed as a great public space to draw people in.

The next halt for visitors is usually the Bengali Market, which is just a 5-minute walk from the circle. Built in the 1930s by Bengali Mal Lohia, a businessman of considerable repute, it is one of the oldest markets in the city.

It is a small market around a circle, and is famous for two prominent sweet shops that sit across each other — the Bengali Sweet House and Nathu’s Sweets, which are almost always teeming with with people salivating for a delicious serving of chhole bhature.

Two to three kilometers from the Bengali Market is Janpath, originally known as the Queen’s Way, hosts the Janpath Market which is equally famous among Indian and foreign tourists. The market is composed of small shops, mainly curio houses and small clothing stores that are hard to find anywhere else in the city.

Across the road is the Central Cottage Industries Emporium, a Government of India undertaking. This showcases the creations of Indian craftsmen, weavers and folk artists, and is a favorite place with customers’ local and from world over. South of Janpath is the National Museum and Indira Gandhi Centre for the Arts with their exhibitions and grand fairs along with wide range of public programmes.

The list of public spaces in Central Delhi does not end here. I have not even started on the  two circles at Connaught Place, the Bangla Sahib, Mohan Singh Place place and many others, which I will write in the next post.