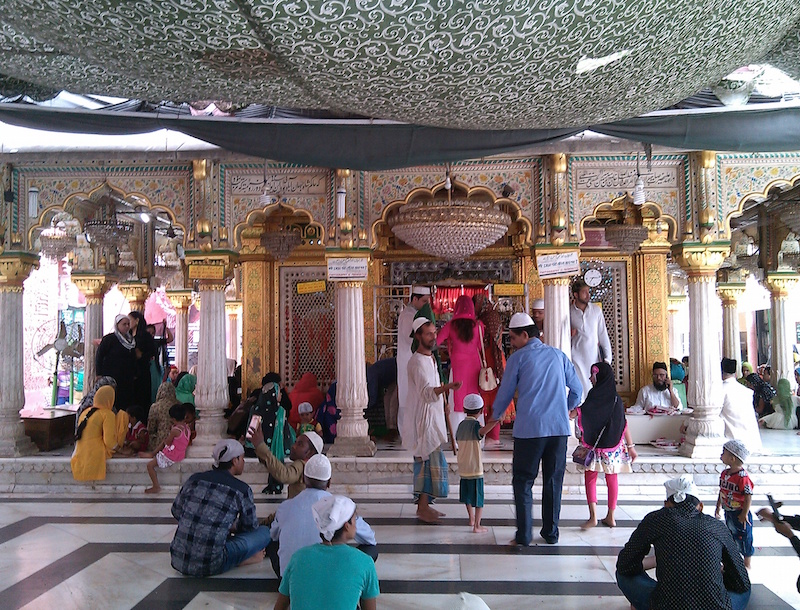 One of the oldest places in Delhi is the ‘dargah’ (shrine) of Hazrat Nizamuddin Auliya,the famous 14th century sufi saint (1238-1325 A.D), in West Nizamuddin in south Delhi. During this period, the sultanate of Delhi changed many rulers. He is one of the most revered saints associated with the spread of Sufism in south-east Asia, especially India.

Hazrat Nizamuddin Auliya belonged to the Chisti silsila, one of the four major orders of sufi saints in India. ‘Silsila’, meaning ‘continuity’, implies lineage. This silsila was established in India with the coming of Hazrat Mohinuddin Chisti to India in 1193 A.D., and his subsequent move to Ajmer where his shrine now rests. His disciple, Khwaja Qutubuddin Bakhtiyar Kaki spread its influence to Delhi where his dargah is built in Mehrauli. He was succeeded by Baba Farid, the famous poet who lived in Punjab who was, in turn, succeeded by Hazrat Nizamuddin Auliya.

The enclosure of the Hazrat’s shrine also houses the tomb of Amir Khusro, his beloved disciple and a legendary court poet of Khilji and the Tughlaq dynasties. He was an extremely gifted poet and scholar credited with the invention of musical instruments like sitar and tabla and having composed some timeless verses including ‘Chaap tilak sab cheeni, mose naina milaike’( you snatched away my looks and my identity by merely looking at me).

Moreover, he is known to be the precursor of the urdu ‘ghazal’ (the predominant form of urdu poetry). It is said that it was the Nizam’s wish that they be interred in the same grave, but since it was against the Islamic law, they were buried in separate ones, but near.  In both the shrines, women aren’t allowed to enter the inner chambers.

His shrine is visited every week by thousands of people from different walks of life. Rich and poor alike can be seen paying their respects to the saint and asking for their ‘mannats’ (wishes) by tying threads on the latticework which surrounds the dargah of the ‘Auliya’ and Khusro.

As per tradition, the devotees first visit Khusro’s shrine and then Hazrat Nizamuddin’s. The enclosure also includes baoli (well) and a ‘masjid’ (mosque) which also dates back to the 14th century. Currently, it is being restored. Princess Jahanara’s tomb (Shah Jahan’ daughter) also lies inside.

Although Sufism as a mystical tradition has its roots within the philosophy and teachings of Islam, in practice, the followers of sufi saints comprise all religions. The devotees include people of all faiths. Perhaps, this may be because of the secular nature of their teachings.

In an article in The Scroll, Rana Safvi writes about the tradition of celebrating Basant Panchmi in the dargah. The story goes that Nizamuddin Auliya was highly dejected because of the death of his beloved nephew. To amuse the Nizam, Khusro struck upon an idea seeing women in yellow saris singing Baisakhi songs. He decided to don a yellow sari and sing Baisakhi songs too. And surely, it worked. Since then, this tradition has been kept alive.

It must be noted, at this point, that the traditional scholarship has divorced the philosophy of Sufism from its so-called ‘base’ manifestations in the form of shrine cults. Nile Green, a professor who has worked extensively on Islamic history, says that until the 1990s the bias against shrine cults remained prevalent among those who believed that only individual mystic writers were eligible to represent the honorable philosophy of Sufism.

As a result of which not much work has been done on the shrine cults during the earlier Islamic period. However, the social reality of a literary tradition like Sufism must be acknowledged. When we study the relationship between the living sufi and the dead saint, only then we bring the cultural reality within the folds of this abstraction called Sufism.

The dargah stands in close proximity to another tomb — a grand mausoleum of Emperor Humayun of the Mughal Dynasty. Yet, there is a major difference in the way in which history manifests itself through these historical markers. In a unique way, the dargah is always at the centre of a living cultural community. They, in turn, preserve history in the legends associated with the saint.

At a short distance from the dargah stands a memorial to Ghalib’s tomb — a poet who was venerated and chastised in equal measure. Partly obscured by the shops selling flowers for offering at the dargah, the place is a picture of serenity.

A few children fly kites in the grounds, adjoining the tomb, where the qawwali sessions take place. One can almost hear Ghalib whispering in his usual sardonic tones “tujhe ham wali samajhte jo na badakhwaar hota” (We’d have thought you to be a saint, Ghalib, if only you weren’t an alcoholic).

The train awaits you at Australia’s first station