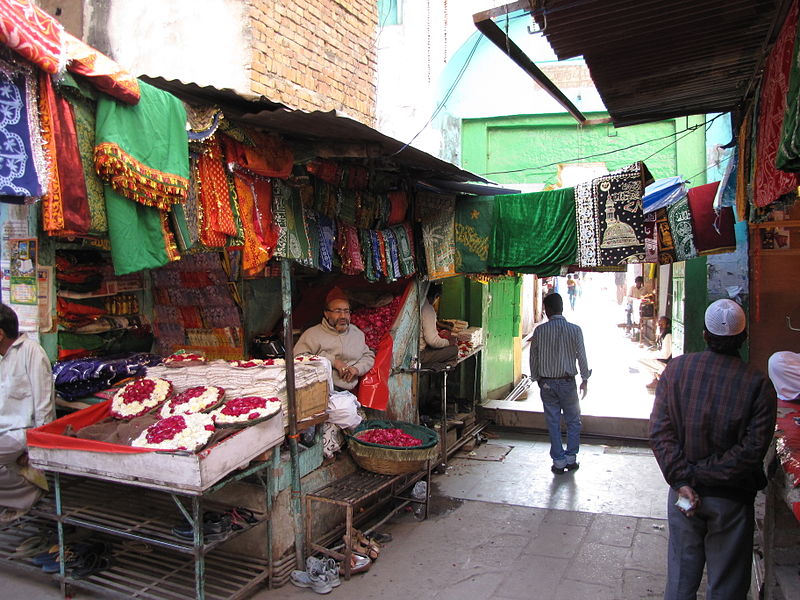 There are few places in a city like Delhi where various faiths merge so seamlessly. The ‘dargah’ is more than just a saint’s mausoleum. It is a religious sanctum alive with an ever-present throng of devotees to pray that their desires may come true.

The tomb of Qutb-ud-din Bakhtiyar Kaki in Mehrauli, is the oldest dargah in Delhi. He was the disciple of another famous sufi saint (perhaps even the most famous one in India) Hazrat Moinuddin Chishti whose dargah in Ajmer attracts a huge following of believers. Hazrat Moinuddin Chishti is known to have laid the foundation of Sufism (chishtiya order) in northern India. Originally belonging to Sistan (now Iran), he came to India in 1193 A.D., during the beginning of Ghori’s reign (which is also the beginning of Islamic rule in India) and settled in Ajmer, Rajasthan. Impressed by the learning and wisdom shown by his disciple Qutb-ud-din Bakhtiiyar Kaki, he sent him to Delhi in order to spread the philosophy of Sufism. He is credited with establishing Sufism and ‘chisti’ order in Delhi.

The tomb is located in the oldest area of Delhi- Mehrauli, which was the capital of ‘Delhi Sultanate’ (1206-1526A.D.) the empire that preceded the Mughal Era. The landscape in Mehrauli is scattered with old ruins and residues of the past. Located at a short distance from the towering ‘Qutb Minar’, the dargah of Qutb-ud-din Bakhtiyar Kaki is a peaceful sanctum amidst the meandering lanes and bylanes of Mehrauli. The tapering road leading to the dargah is lined with eateries and restaurants. After a few shops selling flowers and ‘chadar’ as religious offerings, the gate from where the dargah complex begins, starts to appear.

Before entering the dargah complex, one has to remove all footwear and hand it over for safe keeping to one of the caretakers. The dargah complex is a large area dotted with graves. It was a belief that the land around the shrine of a saint also becomes holy. The main shrine of the ‘auliya’ is closed to women who can view it from outside through marble latticework boundaries and tie a thread on it with every wish. The thread is then untied after its fulfillment. One of the caretakers at the dargah, Mrs. Savita Singh, in charge of shoe-keeping, swears by Hazrat Kaki’s miracles. She enthusiastically claims that all of her wishes have come true. According to her, her family has been living in this place for the past seven generations.

There’s an interesting story to the epithet ‘kaki’ attached to his name. It is said that the penury Hazrat Kaki imposed on himself and the household, his wife was forced to beg the baker’s wife for some bread. The baker’s wife reduced her to tears by throwing taunts and jeers over her husband’s inability to even feed her. Hearing about the incident, Hazrat Kaki ordered his wife to take bread (‘kak’) from his prayer alcove, which miraculously got filled up no matter how much one consumed from it. Henceforth, he started going by the name ‘Kaki’. Still, the ‘langar’ (free meals for the poor) at the dargah is constituted primarily of ‘Kak’ or ‘roti’, the Indian bread.

Apart from the main shrine, the dargah complex also contains a baoli (step well), two mosques, a medieval cemetery and a separate ‘ibadatgaah’ or prayer section for women.

Not far from the dargah is Gurudwara Shahidi Asthan of Banda Singh Bahadur, a Sikh who was executed by the Mughals in 1716 A.D.

One reason why these Sufi saints amassed such a large followers among all kinds of faiths is the egalitarian nature of their teachings. They became hugely popular among all sections of society because of their emphasis on a frugal lifestyle and helping those in need as much as possible. Hindus and Sikhs are as much a part of this culture as Muslims. Such syncretism is also manifested annually in the form of the festival ‘Phool Walon ki Sair’ (a festival of flower sellers). The tradition began after the wife of Mughal Emperor Akbar Shah II swore to offer a ‘chadar’ and a flower ‘pankha’ after her son Mirza Jehangir who was exiled to Allahabad, returned. And he did. The tradition has been followed since 1812.

The three other gates of entrance to the dargah are, as unceremonious and casual as any other public space. This is contrary to the dargah of his successor Hazrat Nizamuddin Auliya’s dargah which is far more famous, in comparison. The Ajmeri Darwaza opens into a courtyard where children can be seen playing. Towards the left is an entrance to the ‘Moti Masjid’ (mosque) built by Shah Alam Bahadur Shah I in 1709 A.D. The entrance to the mosque from the dargah side is restricted by the ASI. Beyond the courtyard lies ‘Zafar Mahal’, built by the last Mughal Emperor Bahadur Shah Zafar.

The Heritage Markets Of Bengaluru