The future of heritage lies in engaging next generations in a meaningful way. It is our job to teach our children about the value of heritage, the wonder of diversity and promote acceptance. Sensitising children to heritage and culture during the years 0-5, whilst their personalities are rapidly developing, will create positive enduring connotations in their minds.

Culture for Kids is a new and innovative group allowing 0-5s to explore World Heritage. Heritage is communicated to the children by way of crafts, activities and using the natural curiosity of children. The aim of the group is to observe how 0-5s can and will interact with heritage and culture; to acquire new knowledge needed to build heritage education programmes; and forge new attitudes towards heritage.

It is difficult to communicate heritage to children of this age, or for them to retain this information. However, research has shown children of this age learn through play; role play, discovery, art, and sensory activities. Theories of constructivist learning assert turning passive learners into active learners enhances the learning interaction and facilitates knowledge retention. This is the aim when engaging 0-5s with crafts and activities. Allowing them to create their own ‘version’ of the artefacts and evidence associated with the culture explored during the sessions. Further, this engages with souvenir theory, for the owner, a souvenir represents an object or artefact which records their experience (Hume, n.d.).

Exploring Durham World Heritage Site was by far the most popular Culture for Kids Session so far! Excellent turnout and fantastic crafts enjoyed by both children and adults! I wanted to look at Durham castle and cathedral as since Jade was born I have taken her there pretty regularly and she loves it! I also did a placement at Durham Castle as part of my MA International Cultural Heritage Management and during my time there I was able to explore many aspects of the site.

At one end of the room we had our crafty activities and the other we recreated Durham Castle and Cathedral in cardboard! The children loved these little dens to play in and were provided with Norman Knight tabards for role play. 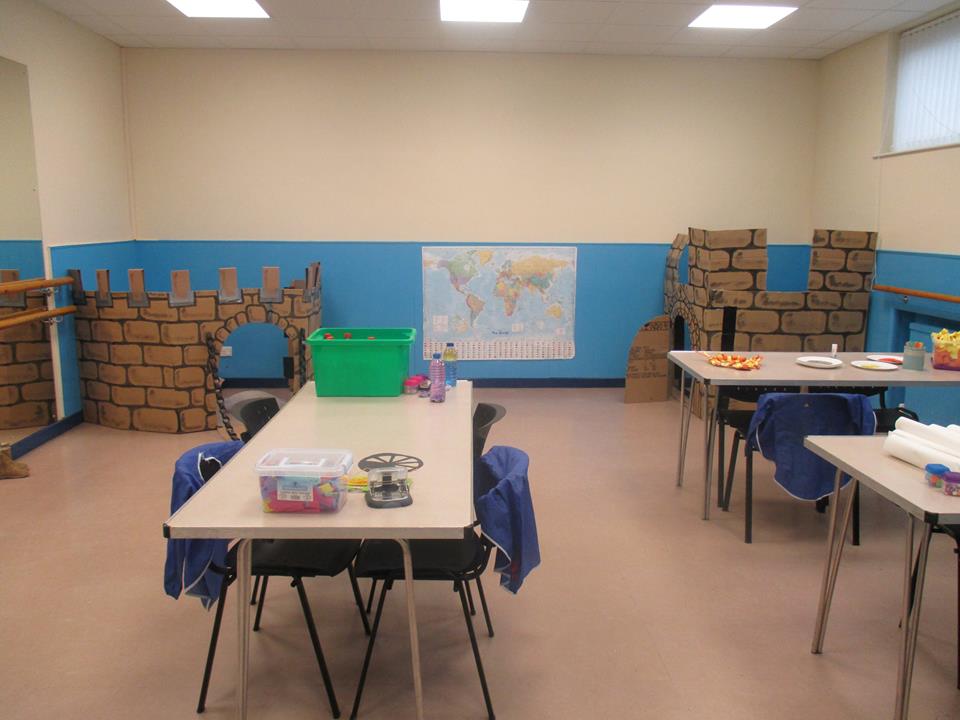 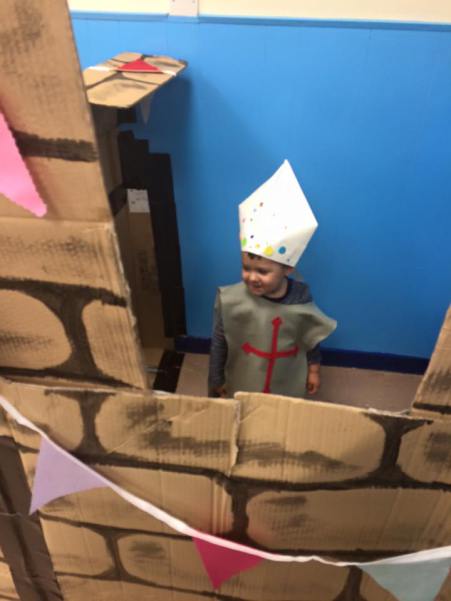 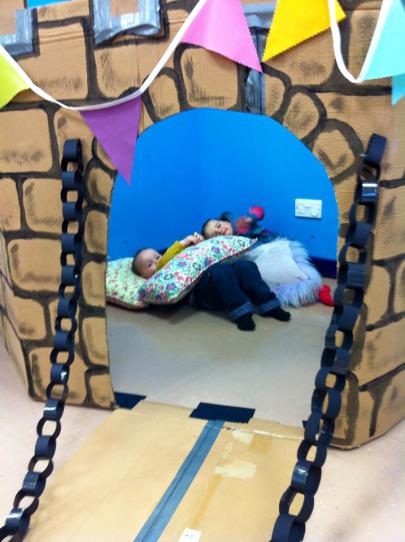 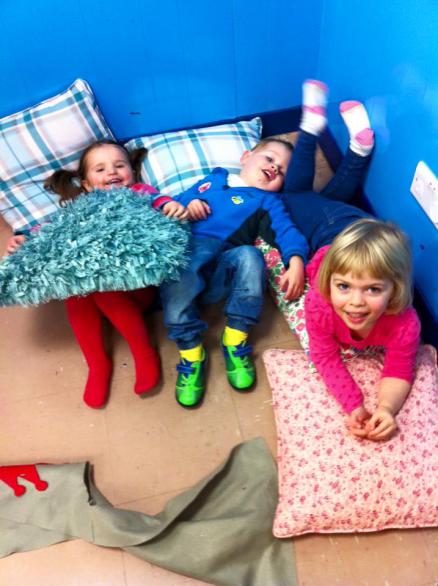 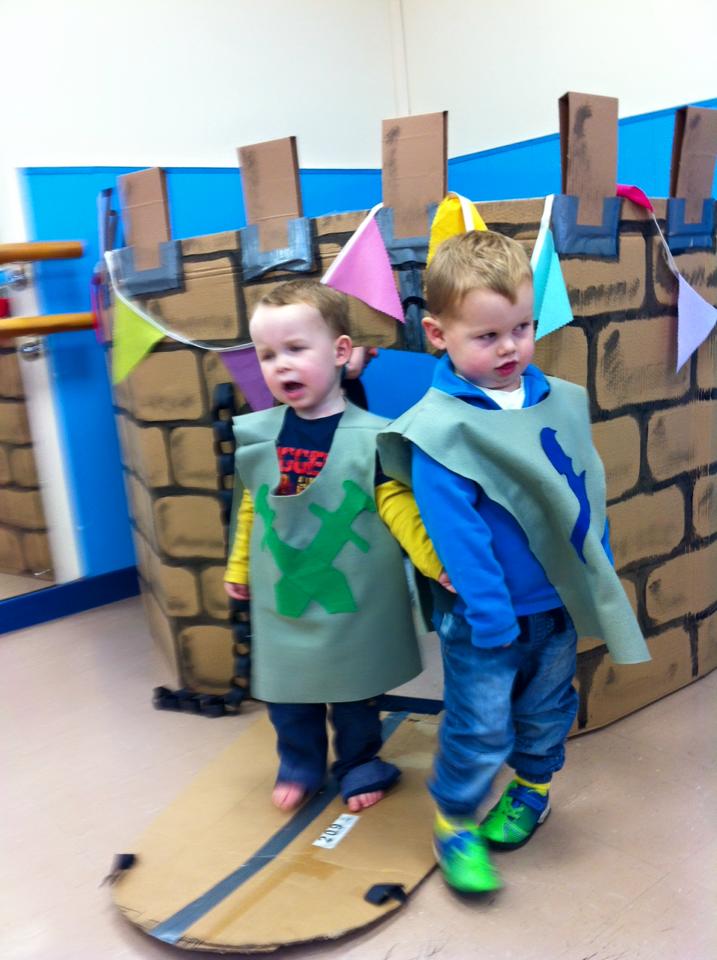 The boys looked so smart in the Norman Knight outfits! Easily created with grey felt (no hemming for quickness!) and different coloured emblems which I cut from felt and used iron on tape to attach. 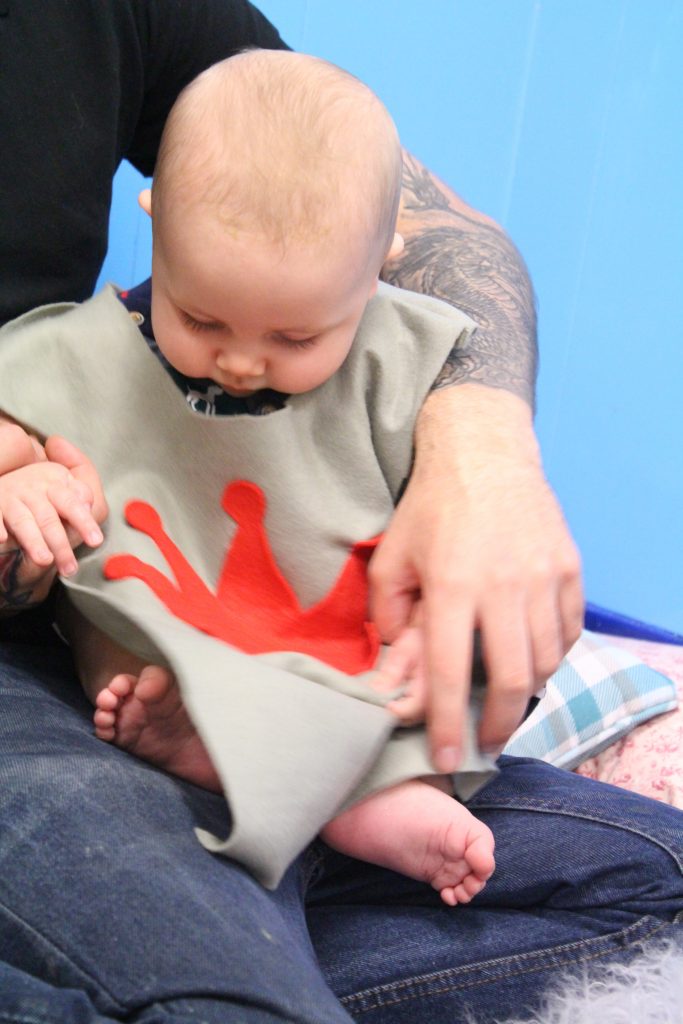 Jade’s favourite part of Durham Cathedral are the many lions which can be found around the site. These lions shown in the picture are her favourite, found at the base of the pulpit in the Cathedral, so I decided to create lion masks for the children… 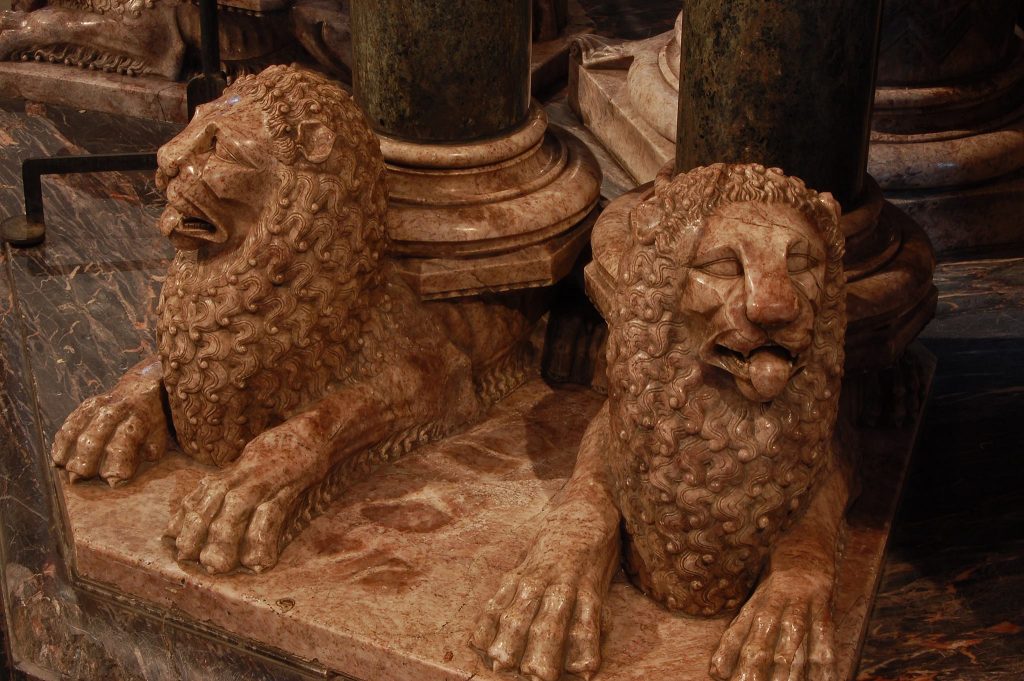 We created lion masks with paper plate with the middle cut out. The children could then attach a lollipop stick to the bottom with sellotape to act as a handle and arrange curled orange and yellow paper around the edges for a Maine. Two orange cardboard ears were added with yellow middles also secured by sellotape. 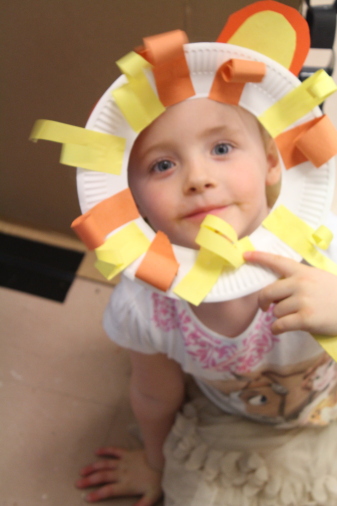 From 1075 the Bishops of Durham were granted special powers and were called Prince Bishops. They had the power to raise an army, mint their own coins and levy taxes as long as they stayed loyal to the King and guarded the Northern Frontier against the Scots. Durham is still known as the ‘land of the Prince Bishops’. We created Bishops hats which the children could decorate with jewels and glitter to signify the power and wealth of the Prince Bishops. 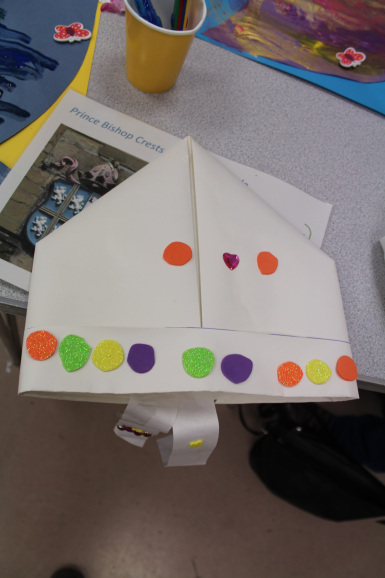 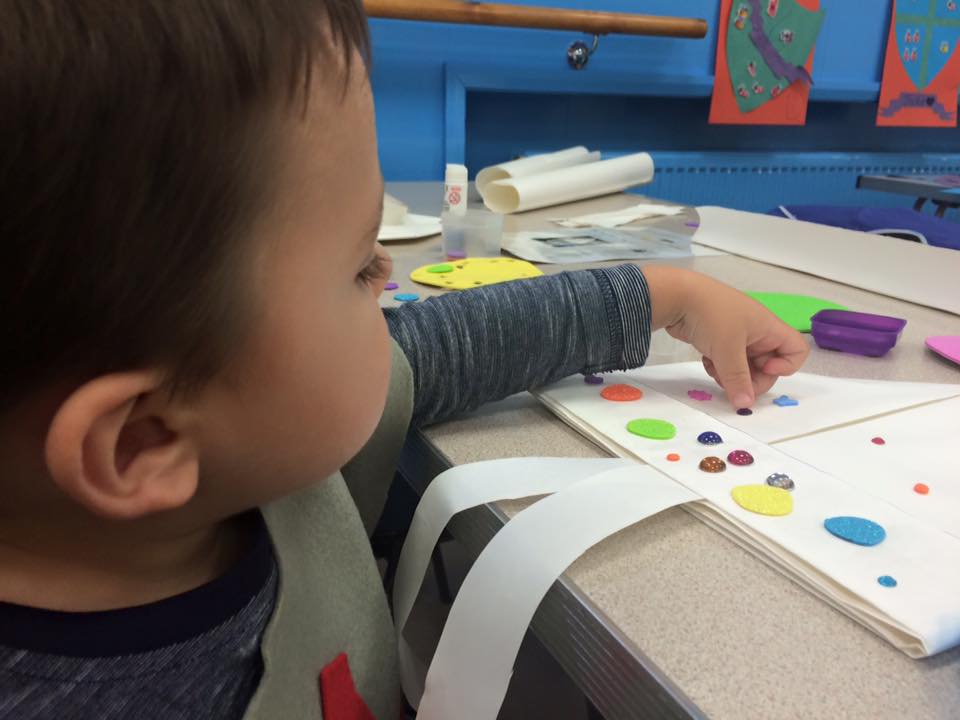 Painting activities are always a favourite with the children! This week we were creating family crests similar to the Bishops crests which can be seen around Durham Castle. The story of the Prince Bishops at Durham is an important aspect of the history and culture at Durham World Heritage Site. The Castle was home to the Prince Bishops until it was converted into a college for Durham University students in 1832. The Castle was commissioned in 1072 by William the Conqueror, which he gave to the newly appointed Prince Bishop in 1075. Over the years, new sections of the castle were added by the Bishops and when they built new parts they would place their crest on the outside to signify it was his addition. The children loved this activity so much, some children even did it twice! 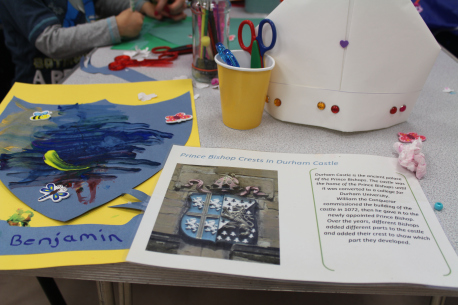 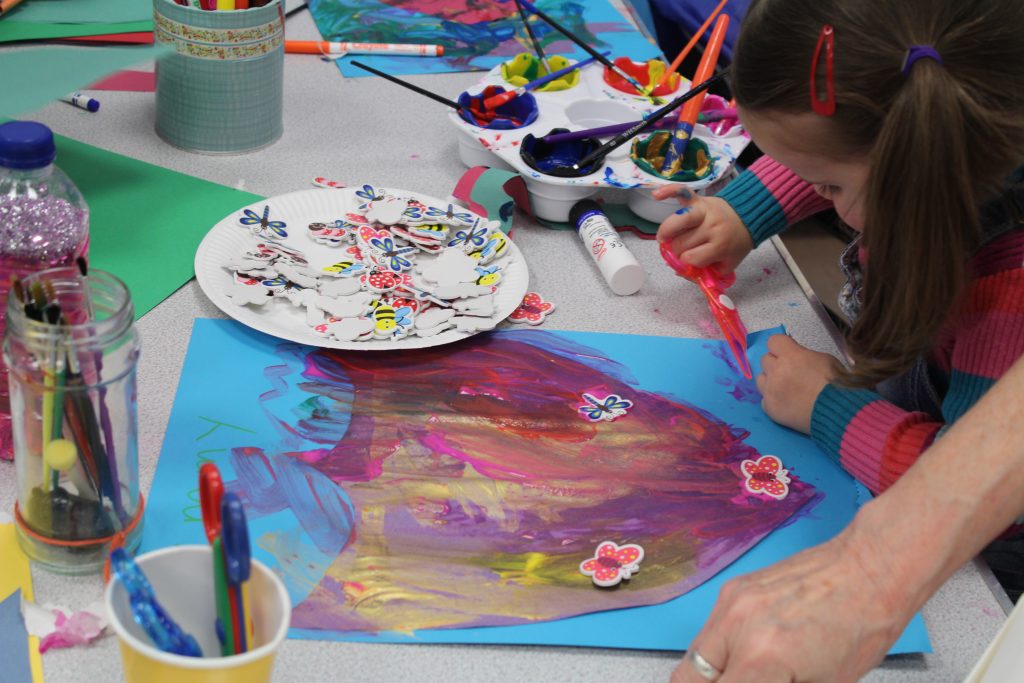 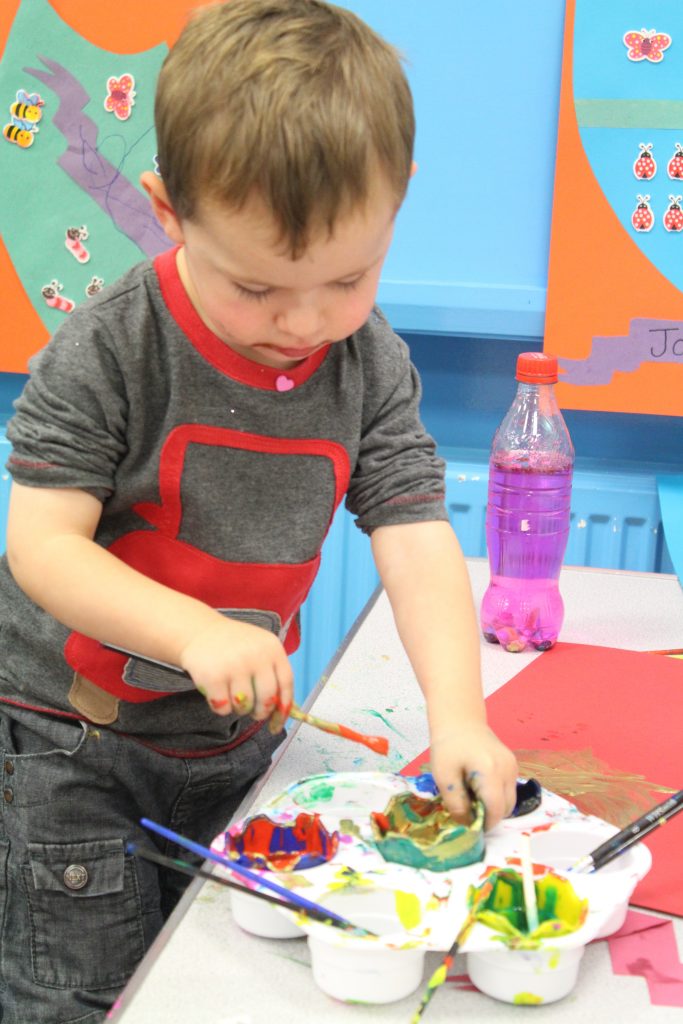 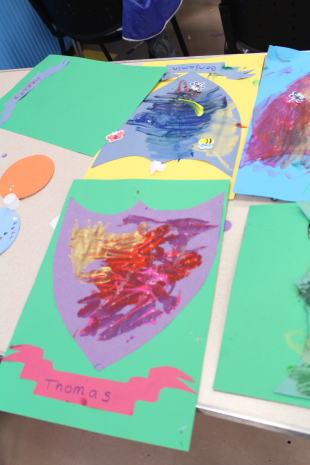 I left crest shapes, paint and stickers on the table so the children could freely design their crest.

In 2007, divers found artifacts in the river by Durham World Heritage Site. They included gifts from Pope Paul VI and a commemorative medallion presented for the Queens coronation in 1952. They had been last in the possession of the 100th Archbishop of Canterbury. It is unknown how they come to be in the river however, it is believed the Archbishop threw treasures into the river as a ‘gift to the city’. We recreated this by making sensory bottles using pre-filled plastic bottles and the children topped the water up with beads, sequins and glitter. The glitter worked particularly well as it dyed the water wonderful colours! 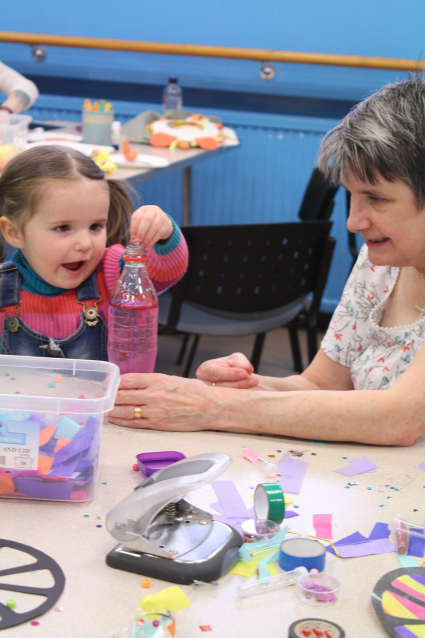 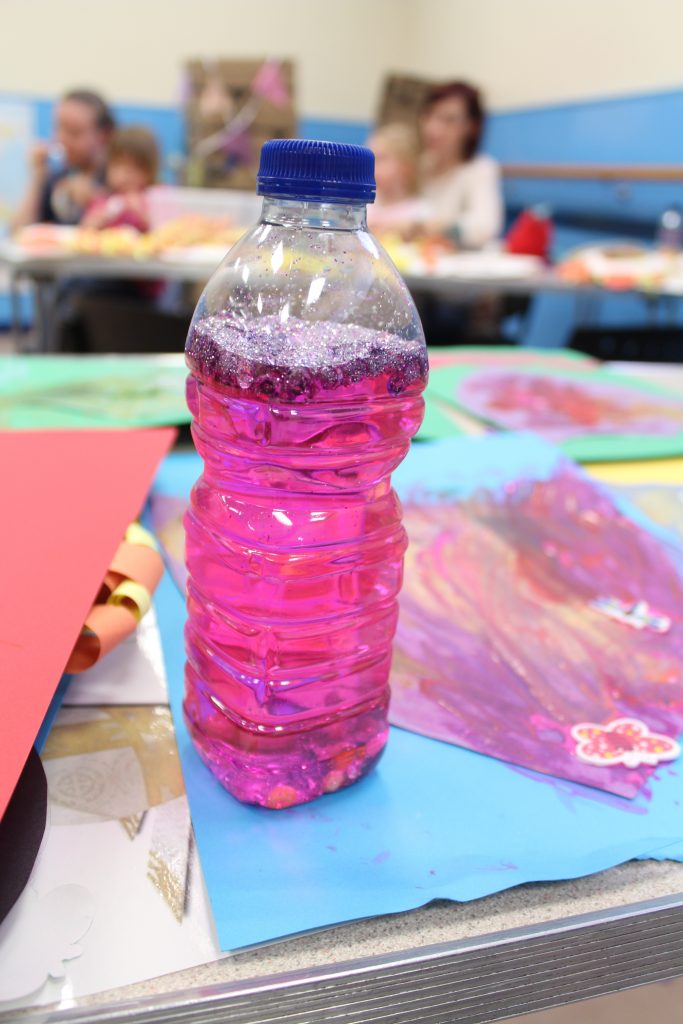 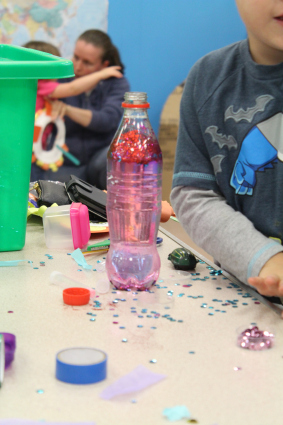 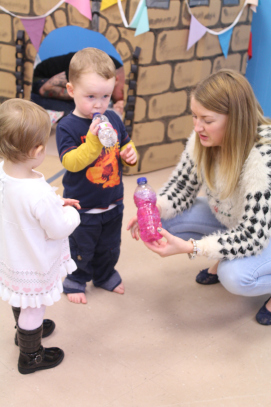 The Rose window is an incredibly beautiful treasure within the Durham Cathedral. It depicts christ and the twelve apostles in the centre and also the Bishops of Durham, including the first Prince Bishops. The window was originally constructed in the 15th century but was destroyed during the reformation. The window in place now was reconstructed in the 19th century. We made ‘stained glass windows’ using sticky-backed plastic, black card, coloured tissue paper and string. 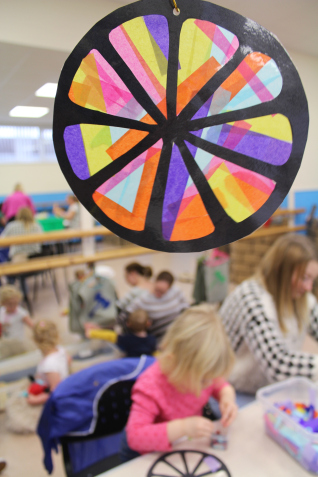 A round wheel pattern was cut out of black card to resemble the Rose window and laid on to squares of sticky-backed plastic so the children could begin by peeling off the back (with help from their parents). Then they could lay the pre-cut strips of paper in any pattern they like over the wheel. When they are finished, the excess plastic can be trimmed off, and a single hole punched in the top with string threaded through for hanging up at a window to catch the light. 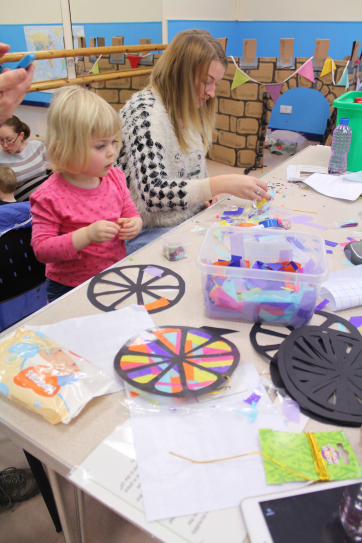 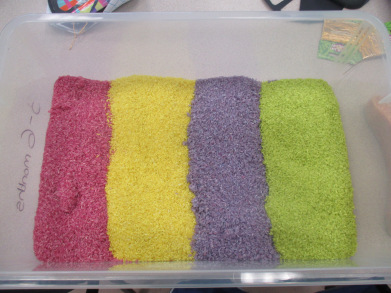 I thought this would be great for the younger children but it proved popular with all ages! There was a crowd when we ‘unveiled’ the sensory rice… 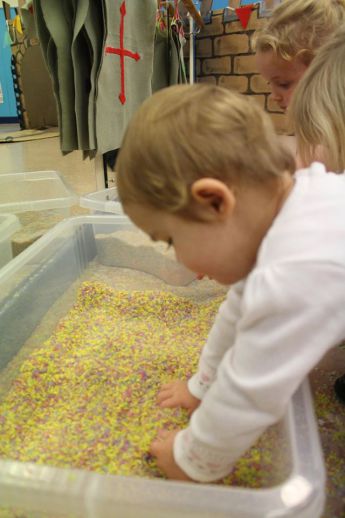 ‘Think like a wise man, but communicate in the language of the people’

The age range of the children is 0-5 years and as such it is difficult to communicate heritage to using traditional means of interpretation. They cannot yet read, they cannot easily relay information to confirm they have understood what is being talked about, and they have varying but generally short attention spans. It is important to communicate with them in a way they can understand and to exploit their learning styles to create lasting interactions with heritage. In this way Culture for Kids will continue to create activities for children and promote World Heritage.

A key observation of the sessions are the ‘souvenirs’, by this I mean the items created when the children partake crafts activities, works in prolonging the learning process. They act as a reminder of the session and sparks memories of what they have learned. Informal feedback suggests the children repeatedly play with these items, particularly the role playing objects they create. Parents often report they fix items for continued use or create new ones.  Matching how children learn with the activities is crucial but also to be mindful that different children have different preferred methods of learning therefore variety in sessions is paramount. Donna Mitchenson

My Passion for Exploring