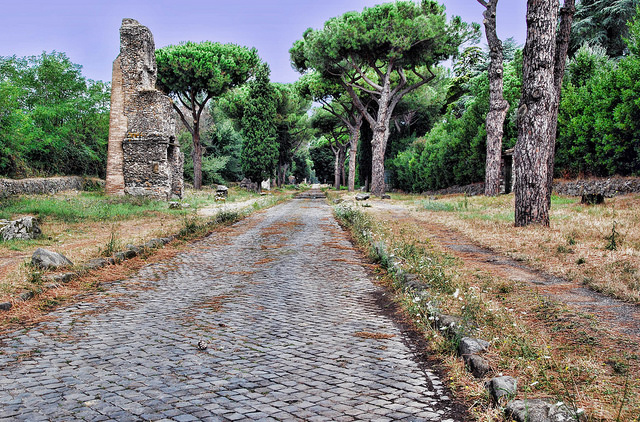 The importance of road transport and migration is highlighted by its antiquity, often portrayed in archaeological findings.

The capability of traveling by land was probably the first thing that early humans learnt as they developed and evolved into their present day counterparts. Unless the largely dismissed Aquatic Ape Hypothesis turns out to be true through some discovery, it is pretty safe to assume that our first steps were taken on dry land. As we developed modes of transport, we saw the need to smoothen out land to craft the first roads.

Some of the earliest roads date back to the Indus Valley Civilization (around 4000 BC), and are characterized as being perpendicular to one another, and sweepingly long. To encapsulate the theme of this month,  I feel that there is no better way than for me to decode the notion of a cultural route through some remarkable, coincidental archaeological findings in the realm of road transport.

This is just one way to look at cultural routes. The notion of the cultural route may be traced using notions such as trade, the feeling of wanderlust and the desire to explore, as well individual cultural journeys. In this article, I’ll be providing an archaeological perspective about the notion of a cultural route in the tangible sense.

Flashing forward from the Indus Valley to around 300 BC, we see the Romans building their own roads. The Appian Way, a 350 mile long road that spans from the Roman Forum to modern day Brindisi, is exemplary of the gargantuan projects that the Romans undertook in their prime. Before the Romans went to England in around 54 BC, there were no solid, paved roads to travel on. It was the Romans who gave the Britons solid, durable roads using their local mixture of cement, sand and paving stones to create raised platform-like paved roads. The drainage of these roads is said to have been quite impeccable as well.

2014’s excavations under a proposed Mcdonalds restaurant site in Fratocchie (South of Rome) led to the discovery of the 150ft stretch of Roman Road. Said to be a tributary road to the Appian Way, its discovery led to much banter, with archaeologists being summoned almost immediately. A small patch of road, about 7 ft wide and 150 ft long was unearthed by the excavations carried out, which were supported by McDonald’s, with a contribution of around $300,000 to the study. The final result was a McDonald’s supplemented by a see through pavement that allows one to peer into the void, or choose to go underground itself. I’d say that fries would be the best accompaniment to the context.

Putting the fast food aside, it is important to note that the public and private sector must display a collaborative stance in the preservation of cultural heritage. There is a need to highlight the importance of integrate heritage into our public spaces in a more nuanced fashion. The McDonald’s ‘museum restaurant’ is hardly even a restaurant to the food enthusiast, but its novelty classifies it as a ‘fine-dine’ in the eyes of those thirsting a heritage experience.

From the aforementioned facts, it is quite clear that the notion of road transport has existed since time immemorial, ever since humans felt the need to smoothen the rough paths along which they traveled to commute and migrate. The notion of preserving these facets of our culture has reached the stage of combining contemporary symbols of culture like McDonald’s with the notion of antiquity.

The GoUNESCO Manifesto- January to June 2018