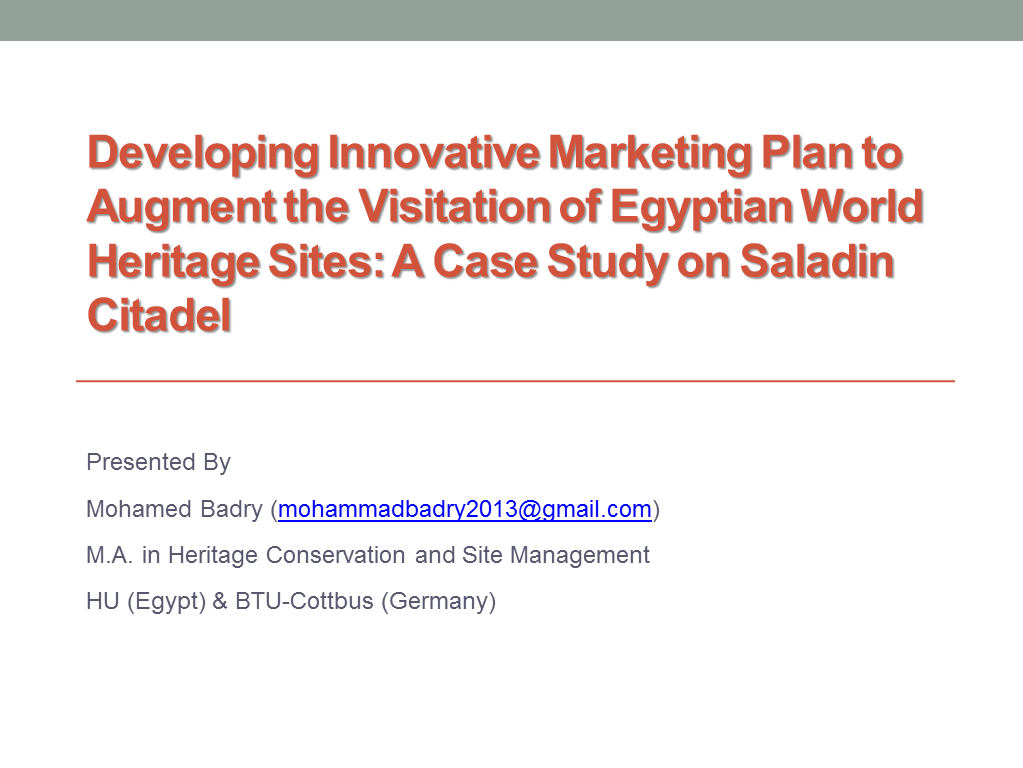 First of All, I appreciate my supervisors – Prof. Mayada Belal and Prof. Ping Kong – for their guidance, encouragement and also, for their continuing support, and comments on the submitted draft of my dissertation under title of “Developing Innovative Marketing Plan to Augment the Visitation of Egyptian World Heritage Sites: A Case Study on Saladin Citadel”.

This dissertation consists of four chapters.  The first chapter is an introduction reviewing the research problem that Egyptian World Heritage Sites (WHSs) aren’t well promoted internationally as there isn’t a clear marketing plan for these sites.  It also includes the research significance, objectives, scope and limitation of the research study, and finally the research methodology.  The author methodologically used the qualitative and quantitative research tools to collect in-depth information of the research topic and its case study.

The second chapter reviews the previous studies and literature which discussed the nature of heritage marketing and the steps of developing a marketing plan for heritage attractions.  Also, it showed the methods which heritage marketing-related authors, like Philip Kotler, Shashi Misiura, Uzi Baram, York Rowan and Hyung Yu Park, used to market WHSs as well as to solve the main problem of a case study augmenting the visitation of Egyptian WHS.

The third chapter is used to address the main objective of this dissertation.  The author develops a model of a heritage marketing plan selecting “Saladin Citadel” as one of the components of the Egyptian WHS “Historic Cairo”.  To start with, this chapter introduces the site history and site attributes. Then, the marketing plan is developed and steps are taken to analyze the current situation of the site characteristics included SWOT analysis, marketing mix, and target customer.  Next the vision, mission, identification of the site’s staff values, and the estimated time, and budget are presented.  Finally, the plan is viewed its strategies, marketing goals and objectives.  The plan identifies an objective, its outcome, its activities, time frame, cost in Egyptian pound (L.E.), a responsibility, and lastly, its Key Performance Indicators (KPIs).

The fourth chapter is a conclusion introducing some recommendations.  There are some recommendations which enhance the site management such as “Creating partnerships” as well as  others support financially the heritage site such as to develop facilities and services, and to create multiple financial resources.

Note: the following article is considered one of dissertation’s sections. The e-referencing program “Zotero” was used as a referencing engine to prepare in-text citations and the final bibliography according to the standards of the American Psychological Association (APA), 6th edition.

Through reviewing the literature, this article explains the heritage marketing-related author’s perspectives for cultural heritage.  Consequently, the author can ask question “Do they consider the cultural heritage in its rigid form as antiquities?” or “Do they observe it as a comprehensive word included a tangible and intangible heritage?”   Additionally, it clarifies how they viewed it for heritage visitors.

From marketing perspective, Gregory Ashworth and Peter Howard interpreted heritage as a tool for conserving the inherited past which forms the present (Ashworth & Howard, 1999; Misiura, 2006, p. 9).  Then, Laurajane Smith confirmed their words (Smith, 2006, p. 44) and added that the heritage site contributes particularly in reforming the identity into the framework of our current socio-cultural needs (Smith, 2015, p. 460).  Hyung Yu Park concurs that the word “heritage” contributes, as a socio-cultural factor, to promoting the image of a heritage site. (Park, 2014, p. 134)

In contrast of the previous authors, Uzi Baram agreed with the theory of John L. Comaroff and Jean Comaroff that heritage is a great term which uses the past, through a group of inherited customs, traditions, history, and actions as well as antiquities, in the present time in order to develop a future vision. (Baram, 2014, pp. 4674 – 4676; Comaroff & Comaroff, 2009)

Regarding constructed heritage, Myra Shackley focused on the necessity of preserving heritage into the distance future for the new generations (Misiura, 2006, p. 161; Shackley, 1998).  Then, Yaniv Poria, Richard W. Butler, and David Airey concurred, using their direct observation, that heritage sites, as well as museums, are the places where the people can realize the past and communicate with the heritage area emotionally (Poria, Butler, & Airey, 2003; Smith, 2015, p. 459).

Shashi Misiura illustrated that cultural heritage has a high significance in the lives of the majority of people and they have a great willingness to preserve it (Misiura, 2006, p. 9).  Then, he identified the heritage site, based on the quotation by the British Tourist Authority (2000) in Travel and Tourism Analyst, as a constant picnic area and something which is considered a tool of entertaining the public and communicating with them in educational way.  He asserted that the heritage site should be open for visitors without pre-booking and suggested offering free admission for the local community groups or individuals.  For instance, the heritage attractions could put on their calendars, something called “Heritage Open Days“, which would seek to raise the local community involvement, allowing visitors to enhance their heritage experience (Misiura, 2006, pp. 146 – 148).  He continued by mentioning that cultural heritage, representing in the national history and local folklore, is considered one of the cultural attractions which supports the tourism industry within the heritage framework.  Moreover, he placed a great emphasis on the significance of heritage sites giving the example of visiting “Open Air Museums” which aim to raise an awareness of the individuals of the community(Misiura, 2006, p. 156).

Using the cultural heritage as source of creating marketing programmes, Mahamudul Hasan and Md. Imrul Jobaid stated that the historical activities and their owners are prime components forming the culture heritage at architectural and archaeological sites (Hasan & Jobaid, 2014, p. 41).

Connecting beyond the approaches of Ashworth and Howard; Shackley; Smith and Misiura, the author can estimate the effects of the inherited past, in both tangible and intangible form, on the audience’s behaviors.  Consequently, he can use the concept of cultural heritage to create actions and programmes assisting the heritage marketing process.