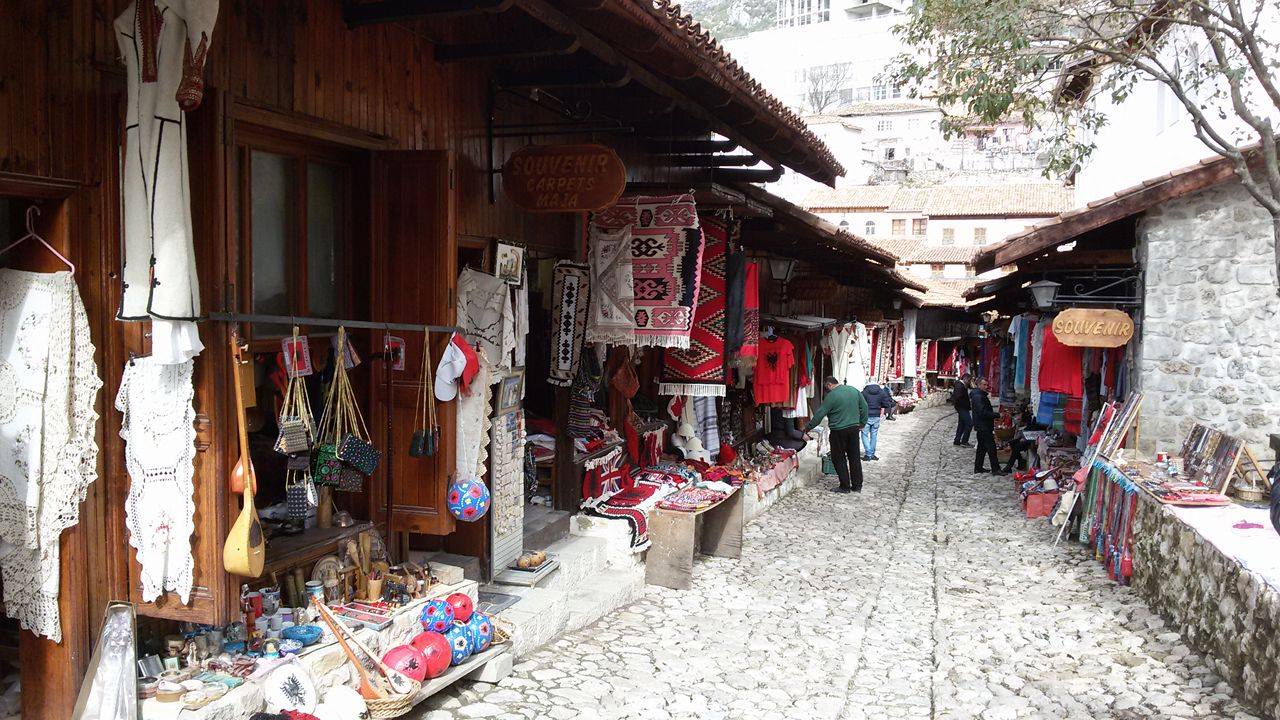 The manufacture of felt is distinct to Albania. Educating the younger locals about this practice enables them to understand the cultural and historical significance of this practice.

When I first decided to choose Kruja for organising this heritage walk I did it thinking about how important it is for the new generations to learn about the traditional craftsmanship in our country. The practice of felt making is novel to Albania. Kruja is one of the few centres where this practice is quite prevalent. Hence, it was an obvious choice for this heritage walk and workshop.

Making the local hat of Albania:

The “qeleshe” is the local hat of Albania that dates back to ancient times. The felt craftsman Guni’s workshop is very close to the entrance of the KrujaOld Bazaar. Felt making is a tradition  that he has inherited from his father, and now he is happy to have passed it on his son. After our arrival, both father and son showed us how a “qeleshe” is made.

Firstly, Guni spins the wool by using a tool in the shape of an arch. He then makes the wool into sheets and applies pressure using a metal tool. The sheets must stay under this pressure for at least 24 hours. After that comes the process of extrusion using a tool called “semitje”. To make a “qeleshe”  there must be two sheets that are attached  to each other using hot water and soap.  The sheets must be smoothened with hot water and soap until one piece of cloth is created. After this, it is squeezed and dried. Finally, a formwork is used to give it a distinct shape.

Working in the loom: how carpets are made using a handloom.

Just a few stores away from Guni’s shop is Dallandyshe Tabaku’s workshop. She is part of the last generation in Kruja that makes carpets, which are locally called “qilima”. The looms used to be made from wood, but now they are made from metal. The sizes, the colours and motifs of the carpets mainly represent typical Albanian craft styles. Red and black are the most commonly used colours to make these carpets.

This is due to the fact that red and black are the colours of Albanian flag. Cotton wire is the main material used in order to weave the carpets Wool is used to knit them.  The process starts with the weave.  Weaving requires one day and t he combined efforts of two or three people.  Tabaku expressed her willingness to pass on her skills to those enthusiastic about the craft, but lamented about the lack of interest in carpet making in the contemporary context.

The feedback from participants

What I enjoyed mostly during our “lecture” from Ndriçim Guni and his son Adi was the fact that the participants were very interested to know more not only how about how the qeleshe is made,  but about everything related to felt making. It was even more interesting and made the craftsmen happy when one of the participants decided to try the process out by helping Adi put together the cloth sheets. Our interactions with Tabaku enabled us to understand the difficulties faced by craftsmen in the age of globalisation. Thus, all in all, the experience was interactive and enlightening for the participants.

There are clearly difficulties with passing on the skills of weaving and felt making to younger generations. Globalisation has led to a shift in the interests of the younger generations.  I was happy to have given girls like me the opportunity  to get to know these processes up close and to evaluate this heritage that is fading into oblivion with the passage of time.

Nueva Ecija: The rice granary of the Philippines

Come March, attend the Pintados Festival in the Philippines