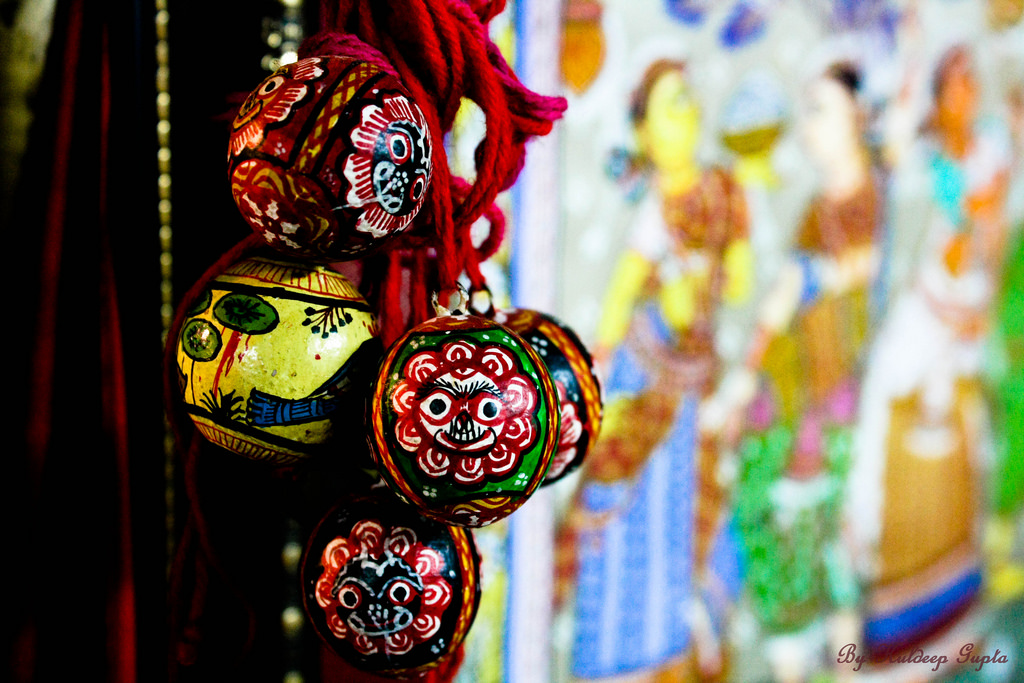 In a diverse country like India, it is no surprise that a variety of crafts exist. Each state is known to have a number of crafts, traditions, languages, etc. My colleague and I, spent the last six months travelling to remote regions of India, in search of crafts that were dying out, due to problems being faced in the environment. Our aim was to cover the various landscapes of India, mountainous, pastoral, river, coastal, desert.

Our visit to Kutch, the desert region, was very interesting.

A few kilometers away from the heavily tourist-populated Bhuj, Nirona is a quaint village where craft is an integral part of every person’s life. Lacquer craftsmen find shade under trees and churn out beautifully embellished, colored utensils while other craftsmen are sitting in their mud houses making copper bells that tinkle out pretty sounds. Unlike most of Kutch which is textile oriented, Nirona is monopolized by Roghan painting – A craft that is being practiced by the Khatri family for generations now. With every male member being a national award-winner, the family is creatively and artistically inclined. Warm, friendly and helpful, Gafoor Bhai and his relatives not only explained to us the art of Roghan, but also demonstrated it and gave us a chance to practice it. Only at that point did we realize how easy it looked, and how difficult it really was. Time consuming; Roghan requires a great amount of practice, patience, accuracy and precision.

We were thrilled to see the Khatri family training a group of women. He told us how he is trying to popularize the craft and increase the employment in and around Nirona. Not only is he training a younger generation, he is also moving with the times, and introducing Roghan to clothing items such as stoles, kurtas and cushion covers.

Similarly, our visit to Telangana, the pastoral region, was something truly enriching.

A small village situated northeast of Hyderabad, Cheriyal is a delight for someone looking to escape th noise and speed of a bustling city. During our two-hour journey from Hyderabad to Cheriyal we witnessed the environmental and space changes including beautiful flora and fauna. Upon arrival, our point-of-contact, Sai Kiran, son of the well-known artist Nageshwar Nakash, invited us to his home. Beautifully painted just like the rest of the village, Sai’s house was a workshop space with paintings tucked in shelves and raw materials lying on the floor and tables. A group of women sat under the sun, painting beautiful Cheriyal masks.

Sai’s workshop and house gave us a good sense of what a mundane Monday was like for the family. Seven generations have been practicing the craft of Cheriyal to sustain their lives. While some painted on cloth, other created masks from scratch.

Raw materials such as tamarind seeds, various natural pigments, were all available in abundance here. Sadly, the surroundings when we visited were nothing like what Nageshwar Nakashr described them to be at one point. His grandmother too sat and answered our queries. She told us about the changes she had witnessed through the years.

While Nageshwar Nakash and his family strive to popularize the craft, he simultaneously works as an art teacher in Hyderabad to financially support the family. He urges people who are visiting Telangana to plan a day in Cheriyal and see their way of living and to promote the beautiful Cheriyal tradition, which is actually a narrative of history in an aesthetically appealing manner.

Another one of the many places we visited was Assam.

Our drive from Guwahati to Goalpara was a picturesque one as we saw tiny shops hawking snacks to nibble on and local vendors selling handmade products. National award-winner, Ranjit Dey came to pick us up from the market area and guided us to his rustic, quaint home. We witnessed the most generous hospitality in his home, as he, his wife and son were all continuously offering us food to savour. Their home was adorned with the Sitalpati mats, which have been a very integral part of their life. They had modern beds but the mats were still laid on them. They had rugs and carpets but the mats were still put on the floor. They added color to the home, and were cooling to sit and sleep on explained Ranjit. Outside the house were laid the resources that are used to make the mats. We walked outside the house to the field where they had their very own plantation. Ranjit explained to us how for the past thirty years or so, he had been growing his own raw material. A major reason for this was the severe deforestation that took place in recent times. One simply does not have the same freedom and liberty to sustainable living among nature. While Ranjit managed to start his own plantation, several others have left the craft due to the scarcity of forests and plantations.

All the family members practiced the craft. While Ranjit demonstrated one technique of weaving, his wife showed us another style. The harmonious working was simply inspiring and efficient to look at.

Throughout our journey we discovered so much on Indian heritage, culture and the diversity that this country possesses. We collected crafts from these regions and have curated an exhibition based on these crafts. Our endeavor is to protect, promote and preserve Indian culture and heritage.

Dilli 6: A hub of food, culture and history

City Itinerary: How to travel well in the Vatican