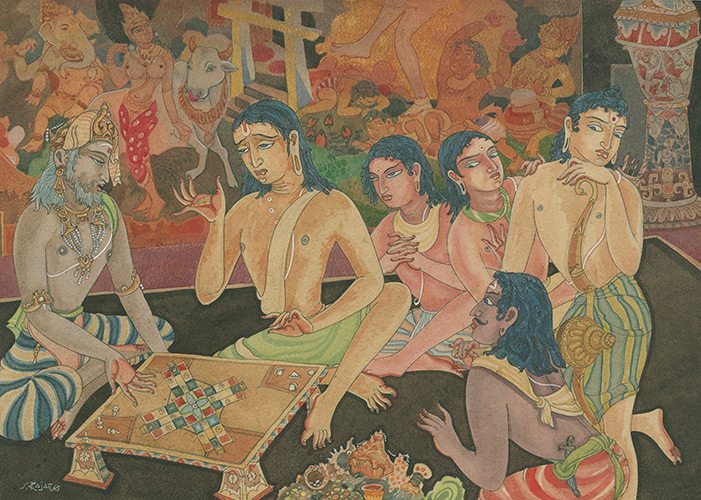 This article is written by Ananya Mahir. It was originally published on www.nazariya.in,  an initiative that is connecting rural India to metropolitan cities

Board games form a good diversion for boredom, and have existed since the Vedic era. Chowka, famous from references in the Mahabharata, is exemplary of games developed in this ancient period.

We all play board games in groups (large or small) to pass time. Some are long and tedious, while others are quick, based primarily on chance. In the modern context, one needs to purchase the paraphernalia required to play a board game. However, some games do exist, that can be played using simple items from the household. One such game is Chowka.

Just like Snakes and Ladders, Chowka originates from the Vedic period of Indian history. It finds its most prominent mention in the Mahabharata, where the Pandavas gamble away their kingdom and wife to the Kauravas as a result of losing the game. Played in the courtly context, the game was primarily designed to enhance mathematical skills of young children. However, the element of chance in the game was also correlated with strategic ploys. This enlightened children about war tactics, and improved their hand-eye coordination as well. It is known by a variety of names across the Indian subcontinent: Challas Aath in Maharashtra, Kavidi Kali in Madhya Pradesh, and Khaddi Khadda in Punjab.

Chowka can be played using simple household objects like tamarind seeds, broken bangles and cowrie shells. A grid is integral to the game, which follows a plethora of rules across the Indian subcontinent. In Tripura, the game is regarded a ‘Race Game’, where players compete to reach the innermost square of the grid. The coins are manipulated by a throw of cowrie shells.

One usually plays Chowka on a 5×5 or 7×7 board. The dimensions of the board change with the number of players, but must be a perfect square. If the size of the board is NxN, where N has to be an odd number, the number of pawns possessed by each player would be N-1. The squares can either be drawn on the floor, or onto a board covered in silk.

Each player has a sum total of 4 coins, and thus can decide which to move upon throwing the dice. Strategy and chance, thus form the basis of the game. The strategy finds its core in the pawn that the player decides to move. Thus, along with sheer luck, planning and pondering helps come out with a winning strategy.

In the contemporary context, it is possible to play the game at home, but buyable variants are also available online. Manufacturers make contemporary variants attractive through embellishments like Madhubani paintings. Even though the board game does not hold the same popularity it used to in the Vedic context, it is a novelty of our culture that lives on through textual references (as made in the Mahabharata). Android applications that simulate the game are also gaining traction and this proves that the first templates to today’s complex board games retain their viability.

Photowalk: The Evolution of Tirana

Meet the Kalanguya Group from The Philippines