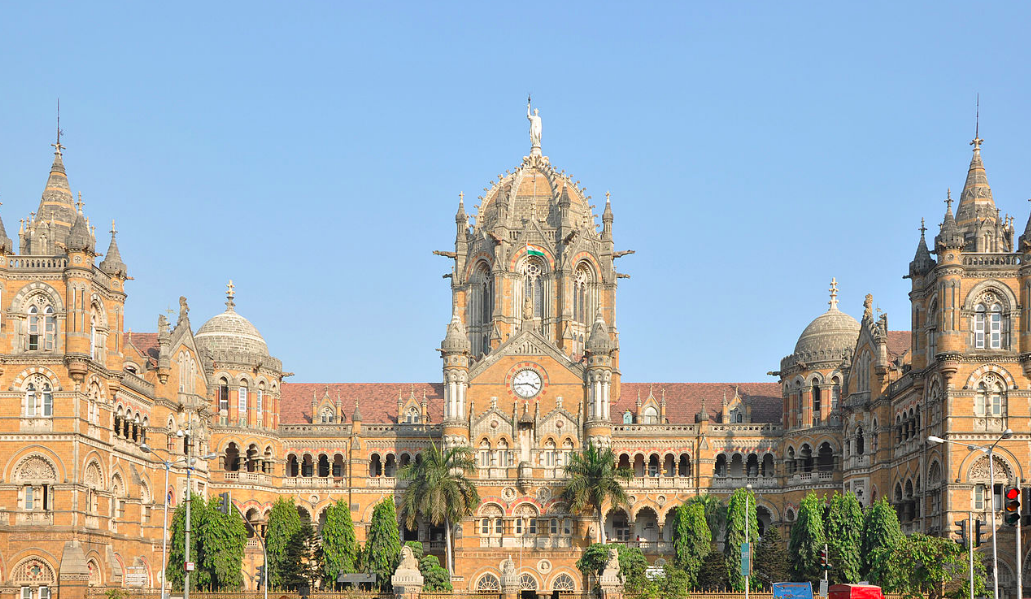 This article is written by Subuhi Jiwani. It was originally published on www.sahapedia.org an open online resource on the arts, cultures and heritage of India.

It is among the top ten railway stations in the world. It is perhaps the second most photographed monument in India after the Taj. It has stood for 129 years. Unless a major natural calamity strikes, it could stand for another 500 or 1,000 years. Whatever its stature be on the world stage, Chhatrapati Shivaji Terminus is for most Mumbaikars, essentially a transit point—people get on or off the suburban or long-distance trains and make their way towards their destinations. They might stop and glance at CST momentarily, click a selfie with it perhaps, but their engagement with it mostly ends there.

CST’s public interface with the city is not that of a warm and welcoming place, one that draws you in to learn more about it, but that of an intimidating, no-access building you need permission to enter. If you quiz a Mumbaikar about the building or the history of which it is a part, s/he probably won’t be able to tell you much. Until some time ago, I, too, was such a Mumbaikar. And we can’t be blamed because there’s no model train, no plaque or info panel within the station premises that tells us about its history.  It was in an attempt to fill this lacuna, both for myself and for others in the city, that I began doing research on CST.

When the Victorians built the Chhatrapati Shivaji Terminus (formerly Victoria Terminus) in Bombay in 1888, they were looking for permanency, says architectural historian Christopher W. London. In a interview he gave Sahapedia, an open online resource on the arts, cultures and heritage of India earlier this year. London said, ‘They were very aware of what was happening with the Roman empire and what was happening in Rome through archaeological excavations. And they must have seen themselves as a republic, doing the same sorts of things within the British empire.’ Here, London refers to the act of building architectural landmarks that function as visual emblems of an empire, even after its demise. In the Fort area of South Mumbai, one sees such buildings which remind us of British rule in India and the Chhatrapati Shivaji Terminus is one of them. Technologically speaking, the railways were for the 19th century what the internet is for our time. More specifically, they linked India’s hinterland to Europe through the port of Bombay and the Suez Canal, thus facilitating the trade of goods and raw materials, and the movement of British soldiers and administrators throughout the subcontinent. 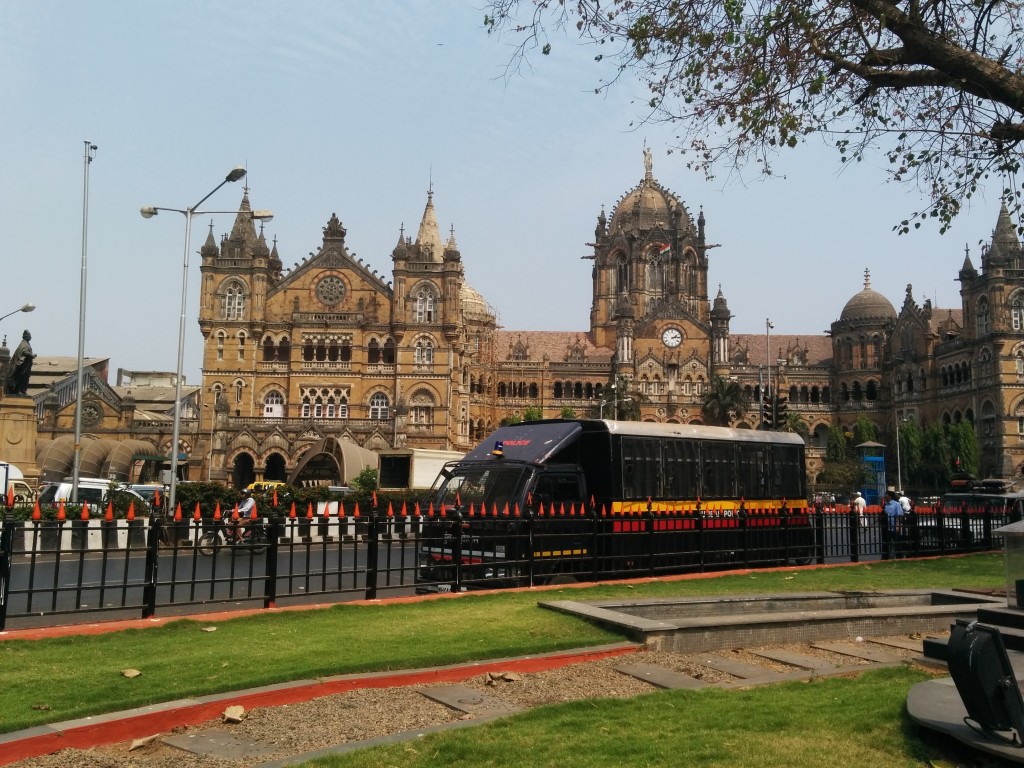 Victoria Terminus was built as the headquarters of the GIPR and as the terminus for its rail network over a period of ten years, from 1878 to 1888. It was made in a High Victorian Gothic (or Gothic Revivalist) style based on late medieval Italian models. According to the UNESCO website, ‘This style was acceptable to both European and Indian taste since it is compatible in its use of colour and ornamentation with the Mughal and Hindu architecture of the subcontinent. The skyline, turrets, pointed arches and eccentric ground plan are close to traditional Indian palace architecture.’ Victoria Terminus was not only ‘a kind of capitol building for a mercantile empire’ (London:86) in its major port city, but also a ‘building thatsymbolised the supremacy and majesty of Britannia “ruling the waves” and even more importantly, the technological triumph of the Empire—the introduction of the railway to India’ (Mehrotra and Dwivedi 1996:11). It is no surprise, then, that the statue standing at the apex of VT’s dome is Prog
ress, holding a flaming torch in her raised hand and a wheel at her side. 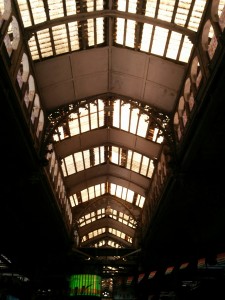 What distinguishes Victoria Terminus from the Gothic Revival buildings made in Bombay from the 1860s onwards is its dome. Most of these buildings have towers, turrets and spires, features typical of Gothic architecture, but none feature a dome.  It is perhaps the most ornamented of the Gothic Revival buildings in Bombay and its grandeur was meant to inspire awe among the local population as well as British administrators, soldiers and 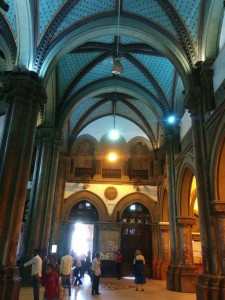 settlers. Its location was strategic: it faced the official government buildings to the west; it had the docks and the harbour behind it; and it had Crawford Market and residential neighbourhoods to the south. The proximity of the harbour facilitated trade and the transfer of goods from the steamships to the railway line and vice-versa. It also helped with the easy movement of British soldiers and administrators, who landed at Bombay port by ship, to different parts of the subcontinent.  As a symbol, Victoria Terminus represented the modernity of the British empire and the railways’ engineering prowess. However, it was the result of a decade of work by the British and by Indians. While Stevens designed each sculptural detail, the models for the building’s embellishments were undertaken by Professor Gomez and students of the Sir J.J. School of Art (many of whom were Indian) under the supervision of the Principal John Griffiths, and the building’s sculptural reliefs were executed by local carvers. The ground floor of the building was constructured by various contractors, but the upper floors were made by a local firm called Burjorji Rustomji Mistri and Company. 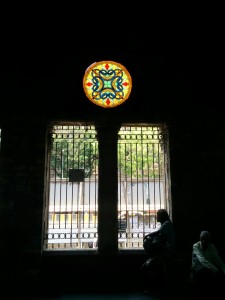 rs after it was built, in 1996, Victoria Terminus was renamed Chhatrapati Shivaji Terminus after the Maratha warrior king Shivaji (1627/30–1680). This happened only weeks after Bombay was renamed Mumbai by the Shiv Sena-Bhartiya Janata Party–led state government in Maharashtra. VT became CST as the result of a decision by then Union Minister for Railways, Suresh Kalmadi of the Indian National Congress. Commentators have suggested that VT’s renaming was only one incident in a game of political one-upmanship between the Shiv Sena-BJP combine and the Congress. Whatever the politics underpinning the change of name, its impact is perhaps best articuled in this quote by railway historian G.D. Patwardhan: ‘The name of a station, much like an individual’s, is an indelible identification mark. Changing it, in a way, alters our sense of history.’ (Outlook, April 14, 1996) That said, the name VT is still etched in the memory of most people in the city and while CST is gaining popularity, it will probably take at least another generation for VT to be wiped out of public memory.

UNESCO nominated Chhatrapati Shivaji Terminus as a World Heritage Site in 2004. The historic building, which houses the headquarters of the Central Railway (Great India Peninsula Railway till Independence), and the original Platforms 1-4 of the terminus have been conferred with World Heritage Site status. CST is one of the few monuments on the list of World Heritage Sites List that is ‘living’ and is used by people on a daily basis. Approximately 3.5 million people use it everyday and nearly 3,500 people work at the station and in the administrative offices of the Central Railway. The nomination file for the World Heritage Site application was prepared by the Indian National Trust for Arts and Cultural Heritage (INTACH) Mumbai chapter on behalf of the Central Railway. The INTACH team, led by conservation architect Vikas Dilawari, documented the history of the CST building and terminus, and highlighted the urgent need for its conservation.  Conservation architect Abha Narain Lambah, who did a conservation audit report of the CST in 2013 for Rail India Technical and Economic Service (RITES), says, ‘Structurally the building has been well maintained by the railways and it has done minor maintenance work on the building. But a holistic conservation of the structure is yet to begin.’ (To learn more about the use, misuse and oversuse of CST, see Interview with Abha Narain Lambah)

CST: Looking into the Future

In the last few years, the Railways has proposed new infrastructure projects that will be built in and around the CST, in the buffer zone of this World Heritage Site. These include the Mumbai Metro Line III, which will have a station for the proposed underground metro at CST, and the CST-Panvel Fast Corridor, an elevated rail line that will go from CST to the proposed Navi Mumbai International Airport. None of these projects have as yet begun, and one can only wonder about whether the railways will work with trained conservation architects to ensure that this historic site is carefully preserved and not threatened in any way by the construction work that these projects will undoubtedly involve.

Last but not the least, the Central Railway has been planning since 2005 to develop CST into a ‘world-class railway station’. The proposed project, which was caught up in a tangle with heritage authorities like Mumbai Heritage Conservation Committee (MHCC) and UNESCO for three years, would not only ramp up the facilities and services at the terminus, but also develop the railway land around CST commercially. A commercial hub is planned in CST’s neighboring buffer zones, including Wadi Bunder and P D’Mello Road in the east, Metro Cinema in the west and the CST bus depot in the south. This hub will include skyscrapers, hotels, offices, shopping complexes, etc. As this was in direct violation of the UNESCO World Heritage Site guidelines, the project has been stalled till now and according to this 2015 news report, seems to be put on hold.

What does all this mean for the citizens of Mumbai? Certainly, they would appreciate more and better rail services and connections in a city where the rail networks are already overburdened. But if CST were to be made into a ‘world-class station’, at what cost would this happen? Should it be at the cost of the city’s historic fabric, of the conservation and preservation of the city’s icon, the CST? The new needn’t come at the cost of the old; colonial histories mustn’t be erased and replaced with nativist ones; and a city mustn’t lose touch with its older self. In the case of Mumbai, the CST and the British-era Gothic Revival buildings speak of an important chapter in the city’s history, one which most Mumbaikars are not even aware of. What we can do, perhaps the only thing we can do, is to constantly build pressure on our public institutions, on the Central Railway in this case, to make the CST building a part of city life, to ‘restitch it as an urban marker with the city’ (Lambah), to make it more accessible to the public and to remind us all of the important role it has played in the city’s and the country’s history.

This article is written by Subuhi Jiwani and is a part of the larger multimedia module curated by her on the Chhatrapati Shivaji Terminus.
All the photos for this module were taken by Malavika Mandalappa.
For the complete module, visit: http://www.sahapedia.org/chhatrapati-shivaji-terminus-mumbai

We bet you can’t answer these questions about Mughal Heritage

Where Our Past Collides: The Dinagsa Ati-Atihan Festival Starts Jan 29, 2017