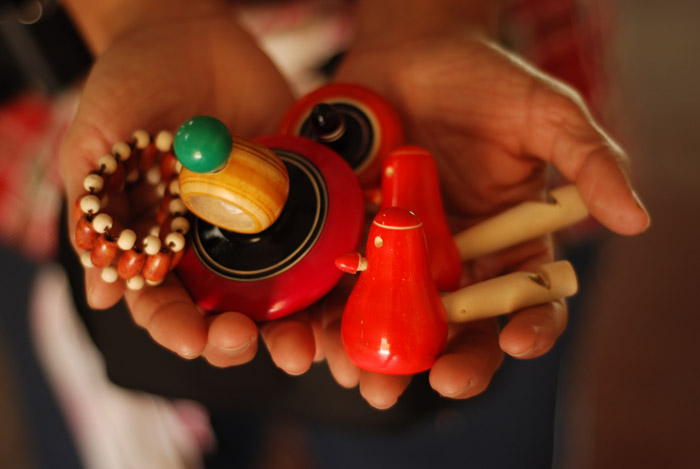 Karnataka is a land rich in art and history.  Many craft traditions in the state have been passed on from generations and this progression has helped support a variety of handicrafts. One such tradition that has gained immense popularity is the art of lacquerware toys in the town of Channapatna, a city located 60 kilometers southwest of Bengaluru, in the Ramnagara district.

This art’s origin can be traced back to the reign of Tipu Sultan who had summoned artisans from Persia to train the local craftsmen in the making of wooden toys. For over two decades, ivory wood  wood has been used prominently; occasionally rosewood, sandalwood, cedar, pine and teak are also utilized.

This traditional craft is protected as a geographical indication under the World Trade Organization, regulated by the government of Karnataka, and are featured in every major handicraft exhibition in India.

During her January 2015 visit to India, First Lady of the United States Michelle Obama, was so impressed by these toys that now they adorn the shelves of the White House!

Owing to the popularity of these toys, Channapatna is known as ‘Gombegala Ooru’ (Toy Town or Land of Toys) of Karnataka.

Wood for the process is acquired from the local tree of Aale-Mara (Wrightia tinctoria). Artisans follow the traditional method of handicraft which involves lacquering.The initial step of the toy making process is procuring wood from the local markets.

The wooden planks are seasoned for two to three months based on their size. Then, they are mounted on a lathe machine and are cut into various shapes using different types of chisels.

Once the required shapes are achieved, they are rubbed with sand paper for smoothening and then are pressed with a lacquer stick, for the eventual gleam. The toys are then pruned, carved and coloured using vegetable dyes. Finally, the product is given a polish.

These toys manufactured using fine quality seasoned wood, vegetable dyes and smooth edges are known to be one of the safest.

The toy making industry is  majorly a small-scale industry. Even though the state government has established large-scale lacquerware craft complexes with training institutes, local skilled artisans have studios in their homes. Even though this industry earlier faced a stiff competition from Chinese toy makers, it is back in demand with export ordrs from Europe and America,.

These local artisans are benefited by a number of non-governmental organizations and private companies such as Microsoft (India) who provide them with designs that are contemporary and have global standards to produce world-class toys.

Though these skilled workers do not make a lot of money in the process, their knowledge of the craft and job satisfaction was pretty apparent when I visited one such workshop.

Memories from the communist times in Albania