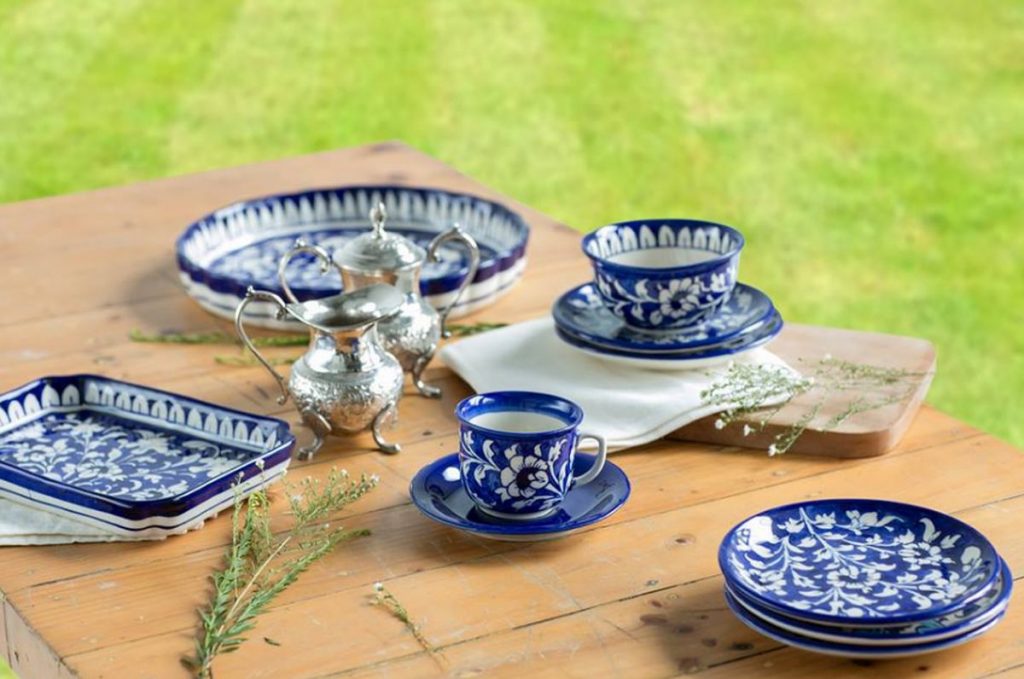 Among South Asia’s oldest cities, Multan, is home to historic arts and crafts in which blue ceramic crafts holds special mention. This hand painted glazed pottery craft is known as kashikari, following an individualistic style that is instantly recognizable by its repetitive designs and colours.

The craft is faithfully transferred to the next generation in its almost pristine form which is the main reason that its artistic style has remained intact but ceramic production technique has changed over time which the help of technology.

Although historians and archaeologists are of the view that the hand painting craft has Persian and Chinese (Mongol) influence from Kashgar, but some art observers believe that over the centuries, Multani Kashikari has inadvertently developed a style of its own.

The hand-painted artistic content consists of floral and geometric patterns enhanced by deep shades of blue, turquoise and occasionally green and red. As with any craft, there are always different kinds of variety in quality available to the buyer/viewer, the more sophisticated quality uses more intricate patterns and designs.

Multani blue ceramic is manufactured as tiles for architectural embellishment, crockery, vases, lamps etc basic purpose of its birth is to decorate. Raw materials for the pottery are procured from Gujrat, Mansehra and Tharparkar. The unique deep blue color is a result of combining cobalt oxide with copper oxide. With technological aid the materials are grinded, kneaded, filtered, moulded and baked at 800 degrees unlike during early period when dung cake fire and wood was majorly used in its manufacture.

Alexander Cunningham conducted an excavation of Qillah Kohna Qasim Bagh in the year 1853 where he discovered glazed tiles used in a mosque built by Muhammad Bin Qasim when he arrived in Multan, the City of Shrines and Sufis. Multani tiles and kasha work have been used on mosques, shrines and important buildings like shrines of Uch Sharif Cholistan, Eidgah Multan, Sachal Sarmast, Shah Rukne Alam’s shrine and many more.

This regional art needs to be protected as it is only appreciated by foreigners while native attention is pertinent for the growth of a craft. Currently artist Muhammad Alam works under the SAARC program in representing Pakistan along with his associates in preserving this art and craft. According to several reports local artisans complain of domestic buyer being very few which is discouraging resulting in abandoning of the craft.

Although Multani kashi is globally revered and has also been displayed at the Prime Minister’s Secretariat and the Prime Minister’s House, more needs to be done in conserving the craft through disseminating trainings and workshops. If the local artisan of kashikari continues to be ignored soon we will have a lost craft due to abandonment.