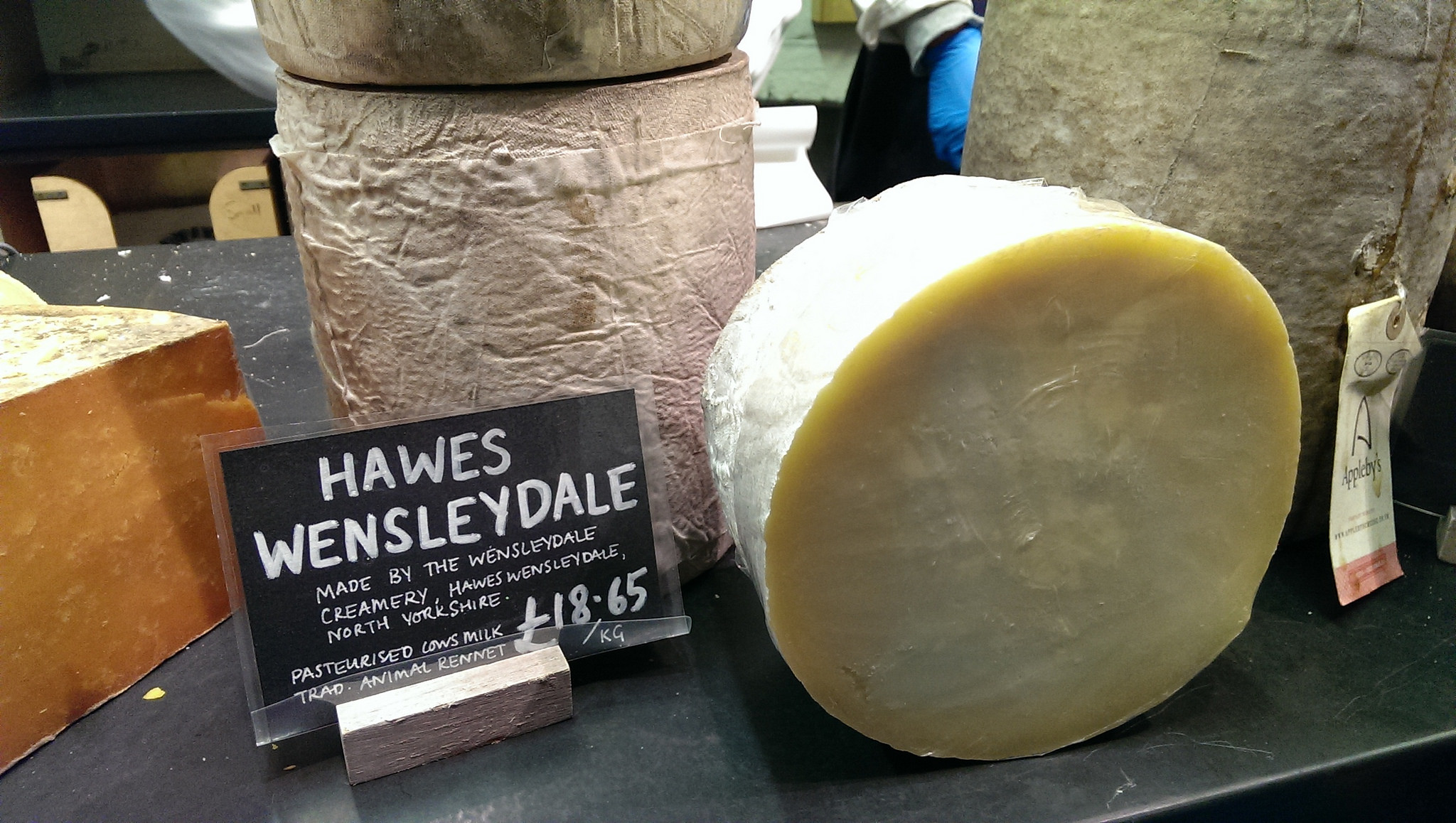 When you drop by the grocery, you may come across the most popular varieties of cheese such as, brie, cheddar, feta, gouda, mozzarella, and parmesan. You are missing out, though. If you are not from Yorkshire, or the U.K., you might not have come across the Yorkshire Wensleydale, a variety that is now sealed with a Protected Geographical Indication (PGI), and is exclusively manufactured in Hawes and Kirkby Malzeard, small towns in North Yorkshire. PGI certification in the European Union is granted to a product that “has a reputation, characteristics, or qualities that are a result of the area” associated with it (Official Journal of the European Union, 2013). It is an amazing feat for a humble cheese originally produced in a small town in one of the most isolated and poorest areas of England.

What makes the Yorkshire Wensleydale cheese special? To answer that, let us first go back to its journey more than a hundred years ago.

It is said that the Yorkshire Wensleydale cheese precedes the founding of the Wensleydale Creamery. As with any classic industry, a business is built from an idea; not the other way around (Johnson et al., 2008).

The Yorkshire Wensleydale’s history goes back to the year 1150 when French monks started producing their own cheese as they settled in Lower Wensleydale. These monks were from the French Cisterian order, first moving to Fors, then to the Jervaulx Abbey in Lower Wensleydale (Kirkby Malzeard Area Guide, n.d.). Back then the monks used sheep’s milk, then in the 14th century, cow’s milk was used. A special character of their cheese was that, little ewe’s milk was also added into the mixture to give its unique flavor and texture. This mixture led into the development of blue mold which is not present in the Yorkshire Wensleydale cheese as is known today.

Production was then confined in the four walls of the monastery until almost 400 years later when locals took notice and King Henry VIII, in 1536, had to abolish the monks’ industry for political and religious reasons (Bernard, 2007). From 1536 to 1540, King Henry VIII ordered for the dissolution of monasteries all throughout England. To save the industry, the French Cisterian monks passed on the cheese-making tradition to local farmers’ wives.

By 1540, all monasteries were dissolved but local farmers still continued with the cheese-making tradition until World War II, where most milk was used for “Government Cheddar.” This was a government-sanctioned rationing scheme amidst a limited supply of goods that has to be distributed among a populace composed of working men, women and children, the sick, and the elderly.

For many years thereafter, cheese and milk production in North Yorkshire was confined in individual homes for family sustenance.

In 1897, commercial production was developed by Edward Chapman, a local corn and provisions merchant, and he established the first creamery in Hawes. He began to purchase milk from local farmers to make Wensleydale cheese on a larger scale. 1897 gave way to the birth of Wensleydale Creamery.

Wensleydale cheese did not hit on the public until the 20th century when British citizens started taking notice of the unique cheese. This popularity was short-lived, however, when in the 1930s the Great Depression struck on the whole of Europe. Just after the devastating onslaught of World War I, the cheese-making tradition nearly ended.

Emerging from the war, in 1935, the dying Wensleydale cheese industry was rescued by Kit Calvert, a local entrepreneur. He rallied for support to save the creamery.

In 1954, “Government Cheese” rationing ceased and cheese-making production continued to decline with no more State industry to supply for.

In 1979, Wensleydale Creamery’s official business title was passed on to Dairy Crest. Dairy Crest, subsidiary of the Milk Marketing Board, was set up in 1933. Dairy Crest is best known for its “Utterly Buttery” product.

After more than a decade of operations, in May 1992, Dairy Crest closed down Wensleydale Creamery with the loss of 59 jobs. Production was then moved to a factory near Preston.

Six months later, a team of four ex-managers, together with a local businessman, John Gibson, completed a management buyout. With the skilled help of eleven members of the former workforce, Yorkshire Wensleydale cheese was made in time for Christmas (Wensleydale Creamery, n.d.). David Hartley, the current Managing Director, was at that time 29 years old and the Creamery’s Production Manager. William Hague, local MP for Richmond, also lobbied for the management’s favor.

The management buyout was successfully made on a Friday afternoon, and by Monday, a cheese buyer from Safeway wanted to stock on Yorkshire Wensleydale cheese.

As for advertising, aside from word of mouth, it also helped that Wallace (of the animated short Wallace & Gromit: A Grand Day Out and A Close Shave) said on the show that he liked Yorkshire Wensleydale cheese. The cheese was again mentioned on the movie Wallace & Gromit: Curse of the Were-Rabbit, and sales was said to increase by 23%, thanks to the film citation (Moore, 2010).

After almost two decades since Wensleydale Creamery made it into the hands of its employee-managers, in 2010, the creamery boasts of getting 23 million liters of milk from 50 local farmer families a year, of providing employment to 200 people, and a 22-million GBP annual turnover. That same year, the creamery’s Managing Director, David Hartley, was also awarded Exceptional Contribution to Cheese at the World Cheese Awards.

In 2013, a major feat was achieved by Yorkshire Wensleydale when it was awarded Protected Geographical Indication (PGI) status by the European Union. This means, the Yorkshire Wensleydale cheese variety and brand are legally protected and can only be manufactured in its assigned geographical area. No one outside Hawes and Kirkby Malzeard can produce this kind of cheese.

Two years later, in 2015, a newly refurbished Wensleydale Creamery was opened. It now employs over 200 staff, has an annual turnover of 27 million GBP, and contributes 12 million GBP to the local economy.

That is a history to tell for a cheese that began in the walls of a cloistered monastery, and a creamery that was almost left as a forgotten child of war.

Bernard, G. (2007). The King’s Reformation: Henry VIII and the Remaking of the English Church. US: Yale University Press.

Johnston, R. (1971). Resistance to Migration and the Mover/Stayer Dichotomy: Aspects of Kinship and Population Stability in an English Rural Area. In Geografiska Annaler Series B, Human Geography, 53 (1): 16-27. Sweden: Wiley on behalf of the Swedish Society for Anthropology and Geography.

Moore, Victoria. (24 December 2010). The wonder of Wensleydale—a big cheese at last! In Telegraph. Retrieved on 10 October 2016. Retrieved from http://www.telegraph.co.uk/foodanddrink/8219752/The-wonder-of-Wensleydale-a-big-cheese-at-last.html

Wensleydale Creamery. (n.d.). About. Retrieved on 26 October 2016. Retrieved from https://www.wensleydale.co.uk/about/

Koshari: Food and the Italy-Egypt Connect

The time is ripe: Mango festival returns to Pune