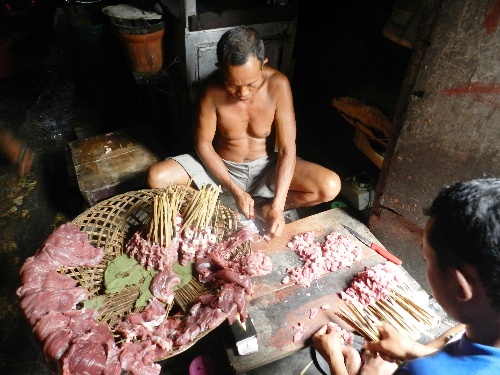 You may have had lamb curry at fancy restaurants, food streets or even in your own homes, but there’s something special about this Bustaman Gulai Kambing in Java, Indonesia, where making goat gulai is a tradition that dates back to the dutch colonial period.

The day starts early in Kampung[2] Bustaman, famous for its Gulai Kambing or goat curry, is an urban settlement located in the northern part of Semarang, a city on the north coast of the island of Java, Indonesia.

At 3 am, there’s a hustle and bustle of a big city at this kampung. The men haul goats to the courtyard of their houses – preparing to butcher them. The women sit outside their houses, scraping goatskin and head. In another corner, some older ladies chop and grinding spices.

Not all Bustaman residents are butchers. There is a proper division of labor concerning the processing of goat meat. Some families are dealers; they buy the goats –which are sold at the kampung in the evening. They usually hire a butcher from outside the kampung to chop the meat in several different cuts depending on the request from buyers. The buyers (from in and outside Bustaman) are gulai or satay sellers who visit the kampung at noon to pick up meat.

The goat gulai ‘s main ingredient is a mix-spice known as the galian. The basic ingredients for the mix are candlenut, red onion, and serundeng. Serundeng is grated coconut fried with onion, palm sugar, galangal, turmeric, coriander and bay leaf.

Yusuf (60s), a goat merchant produces his own legendary mix spices for the gulai. The ladies of the house prepare the mix, while he leaves the kampung early in the morning to buy goats from the animal market outside the city.

Another veteran , Muhammad Toni (55) has been a goat trader for over 30 years. A humble man who holds the trust of many merchants and buyers, Muhammad also runs a catering that specializes in goat gulai. “It took me a long time to learn how to manage the business. I have experienced many failures but I refuse to give up because this is my legacy,” he says.

At Kampung Bustaman , most people rely on goat trading as well as on each other. The is attached to the identity of the people, even for those who are not involved in goat business. People who live in Semarang say that Bustaman produces the best goat meat in town. It is not an exaggeration to say that goat trade has become their heritage.

As a kampung, Bustaman has its own historical value. This kampung got its name from –Kyai Bustam, a religious leader and a communicator between the Dutch government and the locals in the 18th century. The land on which Kampung Bustaman stands now is a gift from the Dutch Empire for his success in thwarting the Chinese rebellion. He was also the great-grandfather of arguably the most internationally known Indonesian painter, Raden Saleh Syarif Bustaman.

Despite the rich history and tradition, several kampung including Kampung Bustaman suffers from environmental and social issues such as flooding, massive development, and poverty. These kampung are important parts of the history of Semarang because most of them were founded at the time of formation of Semarang. Hence, attention from the government and private sectors are needed for the sustainability of kampung as part of the city’s heritage.

[1] Gulai is a type of food containing rich, spicy and succulent curry-like sauce commonly found in Indonesia and Malaysia (from Wikipedia). [2] Kampung is Indonesian version of the Malay word Kampong. The term kampung is used in this article because Kampong is closer to the definition of a Malaysian urban settlement or village. The term kampung is also more suitable in this context instead of the settlement, because kampung represents a specific type of (urban) settlement, which among others is crowded, has a narrower street, and with mostly low-income inhabitants.

The Yummy Tale of Vada Pav