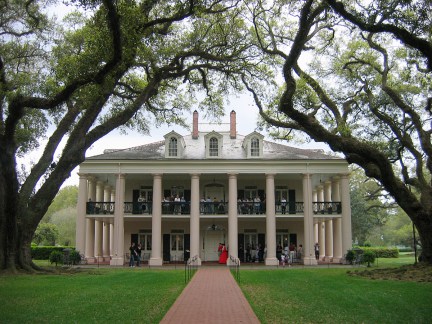 With a focus on farm and plantation house’s architecture

Since the first colonialists landed in the United States of America they were expanding westward. However, it is during the first half of the 19th century that this expansion accelerated rapidly; with the industrial revolution, the Lewis and Clark expedition in 1802, the Louisiana purchase from France in 1803, the war of 1812 and the Indian removal act of 1830 acting as catalysts.

Most importantly, however, the westward expansion was promoted by the ‘Manifest Destiny’ philosophy; a well formed principle (publicised by publications such as the Thomas Paine’s 1776 Puritan pamphlet titled ‘Common Sense’ and politicians speeches) stimulating the belief that American´s were ordained by God to expand its boarders and create American ´colonies´ in their image. Thus, by sugar coating the aggressive expansion, by appeasing the Americans´s conscience the Manifest Destiny’, provided politicians with the perfect ammunition and justification for a wide array of official governmental explorations, legislation, political actions, missionaries, and private economic ventures which lead to the ultímate goal of claiming of more land from American Indians and Europeans. The movement of people then encouraged by the belief (as President Thomas Jefferson wrote) ‘those who labour in the earth’…’are the chosen people of God’.

It is this ‘great leap westward’ (as described by Theodor Roosevelt) that shaped American policy and consequently also the face of the United States of America, but what visible signs remain of this movement? Specifically, what evidence of built vernacular adaption, as a result of the westward expansion, can we find in the architecture of plantation houses in North America?

As America is such a large country, which hosts such a wide variety of environments, industries and ideas, particular adaptions and stylistic developments in vernacular architecture are often unique to a specific area. This is because adaptions to ‘traditional´ architecture are usually a reaction to an areas unique needs. Thus, to understand the architectural adaptions made to vernacular buildings it is important to first look at what stimulated the movement to and development of a particular area. Secondly, one must consider the new environment of the land settled on and work out what new challenges it would’ve brought. Challenges, such as available resources, the topography and the environment, forcing change to the traditional architecture of the area. Lastly, It is also important to understand what influences may also be in the new area or close to the vicinity, for instance, previous European colonial settlers or American Indians.

Their are a number of ideas on what distinguishes a farm from a plantation but a strong argument from John Michael (1993) suggests that it is how plantations grow ‘cash crops’ and enough to sustain the estate whereas farms focus solely on ‘subsistence agriculture’.
In addition, he states how you can distinguish farms from plantations by there smaller size and the fact that they owned fewer, or no, slaves. However, despite these differences farm’s and small plantation’s vernacular buildings were architecturally very similar as the size, and subsequently wealth of the owner, determined the style of house the owner was able to build. In fact a majority of the plantations were not massive estates but modest holdings with 20-30 slaves. Therefore,as many Americans saw farming as a chance of independence and upward mobility, agriculture rapidly spread westward. What adaptions were made to built vernacular architecture as a result?

Firstly, these pioneers of the new land would originally build their homes based on the architecture style which was most familiar to them, the architecture of the colonialist settlement they came from. They would also build practical homes for shelter not to show off their wealth. In addition, these homes were also rudimentary in design as they were being built by ‘ordinary’ people and not architects. Thus, the most common house design (at least in the southern colonies) was derived from ‘hall-and-parlor’ style English homes. They were two floored with the first floor, usually having two rooms divided by a partition, acting as the living area and the staircase, usually next to the chimney, leading up to the second floor which was commonly used as a storage space or sleeping area for children and servants.

In areas outside the original British colonies and its architectural influence (such as Alabama, Mississippi, Tennessee and Kentucky) the simple ‘dogtrot’ style log cabins were the preferred design.

Secondly, as the farming/plantation industry expanded further westward the transportation systems got worse. Therefore, their houses had to be adapted to be built with the local materials available to them. Thus, they normally had weather-boarded walls, with plank doors and window shutters. However,
some were lucky to have access to brick and if they had the materials to make them they had to be made on site. Therefore, brick houses became more common after the initial wave of settlement. They used the material to build studier brick fireplaces, chimneys and raised floorboards in their houses.

Lastly, the new lands to the west had warmer climates and farm/plantation houses had to be adapted accordingly. For example, the traditional ‘English’ thatched roofs did not weather very well and split planks and shingles had to be used instead.

The westward expansion of America and the vast amount of land becoming available provided the perfect opportunity for larger plantations to be built. The strategic 1803 Louisiana Purchase, providing new access to waterways, alongside the development of steamboat transportation resulted in plantations dominating North America’s economy in the south. This fact partnered with the culture of the colonising English, French and Spanish, emphasising respectability and the accumulation of land, slaves and wealth to denote social status, resulted in successful plantation owners building magnificent houses to reflect their new wealth and status. What did there adaptions look like?

At first they extended and renovated the original buildings but soon trained European architects, builders and craftsmen were hired to build these grander houses. As a result, plantation house architecture began to be adapted to look like the European style the owner most associated to.

Therefore, in Virginia, Delaware ,Georgia, Maryland and Carolina plantation houses were being built around an architectural style based on England’s manor houses. For example, the houses began to demonstrate late-baroque Georgian features, emphasising classical details, horizontal and symmetrical facades. Whereas, in Louisiana the plantations demonstrated a French architectural style and in Texas and Florida the Spanish colonial architectural influence is obvious.

It wasn’t until 1793, and the invention of a more efficient cotton gin, that cotton crops became commercially viable. Therefore, when the English industrial revolution made it possible for American entrepreneurs to develop cotton into a profitable industry there was was another boom of plantations in the warmer climates of South America. This resulted in even larger plantations and new houses reflected this success with the grand Greek revival architecture becoming popular.

Therefore, colonial architectural styles were constant influences on Americas plantation and farm houses during the westward expansion. The wealth of the owner determining how grand these houses could be. The limitations of the land on building material becoming less of a stylist limitation as the century progressed.

Michael, J. (1993). Back of the Big House,
The Architecture of Plantation Slavery. (Chapel Hill: University of
North Carolina Press)