Many may think that the classic mud hut with a thatched roof is unique only to Africa, but let me break it to you that back in the Bronze Age, up to around 600BC, in many European countries, people used to live in huts. Mud huts. The architectural designs differed in one way or the other but the basic structural concept remained the same; converting nature to be more habitable. Traditional dwellings of the Britons, blended with the immediate environment unlike the modern structures that clash, degrade and even deplete the earth’s natural resources.

The Celts lived in Britain during the Iron Age from around 750BC to 43AD when the Romans invaded Britain. Celts typically lived in roundhouses, which were – as the name suggests – circular. These houses were cone shaped and circular so as to accommodate a large number of people. The roundhouses were built out of wood and – later in the civilization’s development – stone, with conical thatched roofs and wattle walls. 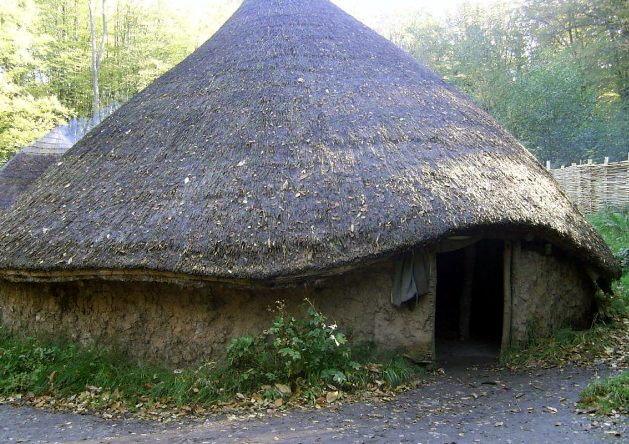 Iron Age Celts lived in roundhouses which were made of daub walls and a roof of straw thatch. The walls of the houses were made of wattle and daub. The wattle walls were made by weaving a fence of pliable hazel or willow sticks into an extremely strong circular structure; daub was made of a mixture of clay, straw and animal dung. Straw and dung helped to stop the clay from cracking and falling away. The daubed walls were very good at keeping the heat in and the wind out. Lime-washed walls helped to create a better appearance and make the houses a little lighter. The houses had leveled earthen floors and fabric sheets/ animal hides served as the front door. The houses had no windows.  This could have been done to ward off the cold during winter. The Celts would light a fire in the middle of the house for lighting and heating. At the tip of the cone roof was a small hole that acted as the chimney. The Celts did not have chairs or furniture other than a scattering of low tables. They slept on furs or mats and sat on the floor. The biggest piece of furniture in each home would be the large looms where fabrics were woven all winter long. In a typical house, the domestic animals were kept inside the house at night together with the whole family! Yes, all the cows, donkeys and sheep curled up together with the family, around the fire, and snored away!

The Celtic Roundhouses were built using sustainable building materials found in abundance from the surrounding areas. All of its structural parts such as sticks, clay, straw, were relatively light and could be carried by hand over distances.

Today, the Celts live in Wales, Ireland, Scotland, the Isle of Man, Cornwall and Brittany in France. The Celtic cultural heritage lives on in: language, music, song and literature.  To celebrate their ancient heritage, the Festival of British Archeology is held in one of the reconstruction sites of Celtic villages. The Celtic Roundhouses were prevalent in Europe from the early Bronze Age, until they disappeared sometime prior to the Dark Ages (5500-100 A.D.), but they are still common in Africa and India today.

The following link shows an interesting animation by BBC on how the Celtic Roundhouses were constructed, have a look: