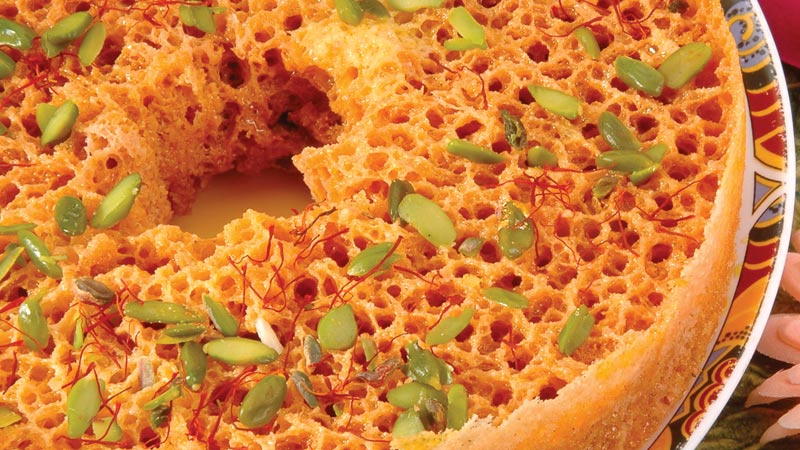 The monsoon delight ghevar, its flavour, varieties and its widespread alliance with the Teej festival.

Ghevar is one such sweet, and is made  in large quantities only during monsoon or sawan. This disk-shape sweet is made with all-purpose flour, deep fried in moulds, soaked in sugar syrup and then decorated profusely with thickened milk and dry fruits. One can find as many as 10 varieties of ghevar; be it plain ghevar or the classic one, mawa ghevar or malai ghevar, kesariya ghever and so on .

The extremely liked sweet is linked with the Haryali Teej, marked on the third day of new moon of August. The Haryali Teej has paramount importance among sawan festivities and is celebrated with great fervour, joy and enthusiasm by womenfolk.

They dress up beautifully in green, yellow or red like newlyweds, put henna on their hands, dance, sing songs, and ride swings. The extent of this festival can be traced through states of Rajasthan, Haryana, Western Uttar Pradesh, Punjab and Himachal.

The revelry of teej is incomplete without ghevar that is meant only for this occasion and one can’t find it a week after the festival is over. The reason being that the honeycomb shape and formations require the moist air of monsoon and to maintain the softness.

During sawan, all sweet confectioneries among these states are full of various varieties, but Jaipur is believed to be the oldest centre. It is believed that it has its genesis from Persia from where it traveled with other traditions to India during the Mughal era. The ghevars from Lucknow and Bagpat (UP), Sonepat (Haryana), Chandani Chowk in Delhi, Mathura and Jaipur are considered of good quality.

Furthermore, ghevar is a carrier of love, care and blessings of parents to their married daughters. Ritually the ghever is core item among gifts sent to daughters on this day with blessing for a blissful married life. The month of sawan is allied with Lord Shiva and his union with Parvati, as they are considered the eternal cosmic pair, parents do bless their daughters for the same.

Customarily,  women get such gifts from their mother-in-laws on teej in their first year of marriage, and after that, ghevar and gift are sent by their parents every consecutive year.

This custom is same similar across all these states with little variations, but ghevar is the common ingredient in them all.

Though the countenance of teej is changing in larger cities with passing time, the sweetness of ghevar that carries blessings remains with little change and addition.

Hunting Survival for the Neanderthal; Sport for the Contemporay

Sohbat: The Pashtun dish that brings people together