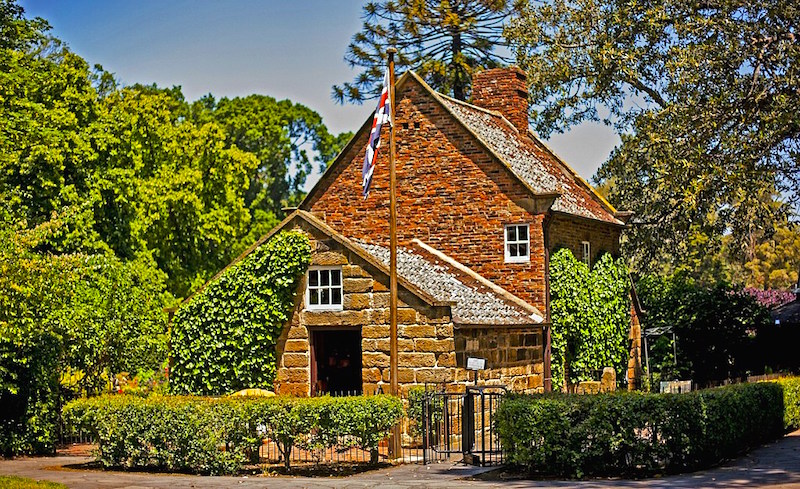 Cook’s Cottage is a vine-covered brick house located to the south end of Melbourne’s Fitzroy Gardens, just minutes from the central business district. Its claim to fame is twofold — as the home of explorer Captain James Cook’s parents, and as the oldest building in Victoria.

The cottage was constructed in 1755 — 15 years before Captain Cook landed in Botany Bay, and eighty years before Melbourne was established. How could Melbourne’s oldest European structure be older than the presence of Europeans in Victoria? How could Captain Cook have lived in a cottage in a place he had never been?

Who was Captain Cook?

Captain James Cook (1728-1779) captained the Endeavour, the British ship when it undertook the first European survey of the eastern coast of Australia. On arrival, he also declared the land terra nullius (nobody’s land), allowing him to claim it for Britain. This was despite the presence of the Indigenous people of Australia, who had inhabited the country for tens of thousands of years. Captain Cook is therefore a somewhat controversial figure in Australia today, leading to several instances of vandalism at Cook’s Cottage.

Did he live in the cottage?

Maybe. The cottage was the home of Cook’s parents, James and Grace. It was likely built the same year that the famous explorer joined the navy, when he was already an adult. He may have visited, but no one can say for certain that he ever lived there.

Like their son, James and Grace Cook never set foot in Melbourne. In fact, they built their cottage in the village of Great Ayton, Yorkshire.

So what is it doing in Fitzroy Gardens?

After almost 200 years on English soil, the cottage went up for sale in 1933. Concerned that an American would purchase the house and transport it to the United States, Mrs Dixon, the owner, put a condition on the sale — it could only be sold if the building was to remain “in the Empire”.

Her wish came true. The buyer was Australian Wilfrid Russell Grimwade (1879-1955), a member of the Grimwade business family. A powerful man, his scheme had the support of the Victorian Premier and government officials. He was determined to bring the building to Victoria, and erect it as a ‘gift’ to the people in 1834, in the centenary year of Melbourne’s foundation.

Even at the time of the sale, there was acknowledgement that Cook had likely never lived at the cottage (McCubbin 1998, p. 38). However, a strong link to Cook himself was not really necessary, at least not to Grimwade. What mattered was the associations between Cook, ‘the mother country’ Britain, and imperialist traditions. The cottage would be a tangible reminder of Australia’s British connection, and a celebration of the colonisation of the land.

It is important to note that in 1930s Australia authorities still largely saw the country as part of Britain. The White Australia policy restricted the entry of non-British migrants, and the British parliament was able to create legislation for Australia. This would change during World War II, but in 1934 the British relationship was still key to many Australians’ understandings of their country, and themselves. The official narrative of Australia still relied heavily on its position as a British colony, and Cook’s Cottage became a part of this narrative.

The cottage was carefully taken apart, with each brick numbered and packed into 253 cases and 40 barrels. Even the ivy which grew on the house was saved, as cuttings were prepared ready for replanting in Australia. The cottage, in pieces, was then shipped across the world on a two month voyage.

The original proposal was for the cottage to be rebuilt in front of the State Library. This is a suggestion contemporary Melburnians may scoff at, given the Library’s central CBD location. Eventually, this idea was scrapped, and the Fitzroy Gardens were decided upon.

Rebuilt carefully brick by brick, Cook’s Cottage opened to the public on October 15, 1934. Later, an English garden was added, furthering the attempt to recreate the English countryside in Melbourne.

Why should you visit?

The cottage shows us how Australian authorities saw the country in the 1930s, and allows us to reflect on what has changed. Grimwade and the government saw the installation of the cottage as a way to strengthen contemporary Melbourne’s relationship with its British, colonial past. It shows us how people and governments can use heritage buildings to construct national identity narratives, and how these narratives can become complicated in just eighty years. The vandalism of Cook’s Cottage, and outraged responses, continue to show us how complicated Australia’s relationship with its colonial past has become.

Today, Australia is a multicultural country filled with people from hundreds of cultural backgrounds. Many of these people may not relate to the imperialist history that Grimwade imagined Cook’s Cottage would symbolize. However, it remains a fascinating symbol of Australia’s changing relationship with its own past.

A Visit to Mirza Ghalib’s Haveli in Old Delhi

Kimjang: The culture of sharing in Korea