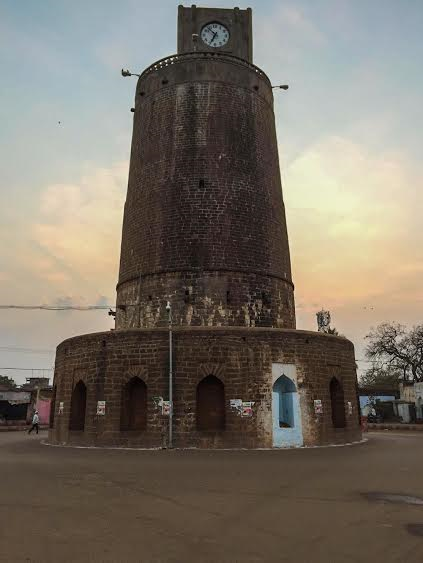 Chaubara a tower which has its own charm served both as Watch and Clock tower to the inhabitants from almost 1082 A.C. The victorious(king) Muti-ud-Din Mohammad Aurangzeb Bahadur ‘Alamglr the conqueror, during the governorship of the humblest servant (of the Court) this was completed. ‘Chau’ means four and ‘bara’ means fortified palace in both Hindi and Persian languages. This cylindrical tower built in the middle of the town where two principal thoroughfares of Bidar cross each other. One of the two thoroughfares extends from north to south and east and west of the cities Entry gates. The town plan is based on the gridiron principle, with parallel streets linked together to cross roads.

As it said to be built in the pre-Islamic period, but its architecture is more or less of Islamic influence. Rising 71 feet above the ground level from where the guards used to keep an eye on entire plateau at the same time enjoying those eye soothing lowlands stretching beyond sight in every direction. With circular base, 180 feet in circumference and 16 feet 9 inches in height, with arched niches built along its lower parts. This central building facing in four directions had 4 wells on the corners in the same four direction to quench thirst of Guards. The tower has the steps built in its interior. The terrace level is at 114 feet, and a space of 8 5″ feet enabling visitors to walk round. A winding staircase comprising eighty steps leads built to reach terrace through a small door on the northern side, resembling those of the early mosques of Western Asiatic countries. Pillars of this tower are frequently to be noticed in the Islamic buildings of the 14th and 15th centuries in India, prayer-halls of the Firoz Shah Kotla mosque at Delhi, and the great Mosque at Samarra. The staircase of the tower has an arch shaped vaulted ceiling which is not to be found in pre-Islamic buildings and has four rectangular openings pierced in its walls to let in light and air. The entire tower is built of black trap masonry laid in lime and strengthened. Mubarak KhaljI’s mosque at Daulatabad, and the Bahamani Idgah at Bidar itself are notable examples of such masonry.

Chaubara also holds a religious and cultural importance, Ramadan colours up the tower and surrounding streets with beautiful lights and every year serving District Commissioner, Superintendent of Police from the terrace of chaubara witness large procession and announce the winning Mandal and rewarding them with a prize on the day of  Ganesh Visarjan. The procession starts by following certain rituals of pooja/arti by these dignitaries of district at choubara and ends in holy water of Manjeera River whose streams fulfil  thirst of entire deccan plateau.

During Bahmani rule these may have been occupied by the guards who kept watch here, or resorted to by pedestrians when taking short rests during their journeys. At times of British Raj the front of the base was disfigured by a police station built facing the north, but heritage lovers Theodore Tasker, the ex-Revenue Member, and his able and energetic successor, Mr. W. V. Grigson, this police station has been pulled down and the facade of the Chaubara fully exposed. The tower was housed with a sun dial and has been replaced with the automated machine clock by the first District Commissioner of  after the Indian Independence, from then it has been reconstructed and modified number of times. But still serves a greater purpose by showing  the right Time!

Roman Amphitheater of Cagliari: a monument waiting to be unveiled